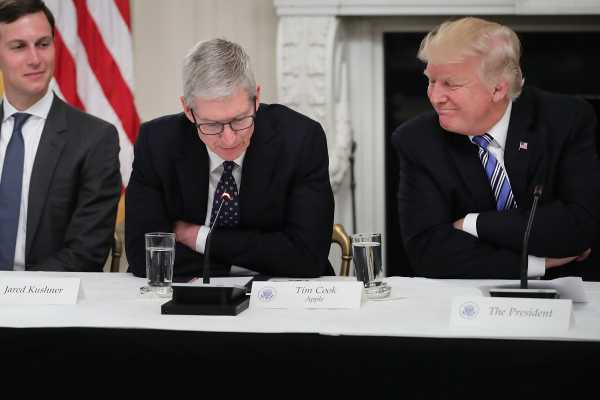 Apple CEO Tim Cook wants you to know he’s in on the joke after President Donald Trump mistakenly called him “Tim Apple” during an event at the White House this week. He changed his name on Twitter to just that — or, rather, Tim and the Apple logo.

The whole thing might seem silly (and it is), but it also highlights the awkward relationship between Apple and the White House — one where they seem to clash at some moments, but where they also play along in order to help advance each other’s interests.

Trump sometimes uses Apple as a punching bag. On the campaign trail, he called for a boycott of the company, and he has often complained that Apple should build more of its products in the United States.

Cook has spoken out against Trump too. He has criticized Trump’s immigration policies and been vocal on family separation and the Muslim ban. Apple has also warned that Trump’s tariffs might force it to raise prices.

Despite their public sparring, Trump and Apple aren’t enemies — at least not when it’s convenient.

The tax cut bill Trump signed in 2017 has been a huge windfall for Apple, which after the cuts dealt out a $100 billion stock buyback. And Apple has been eager to deliver a big public thank-you to Trump with splashy announcements about investments in the US, which Trump name-checked during his 2018 State of the Union address.

Cook has met with Trump in the White House and done public events with Ivanka Trump. He also sits on a workforce policy advisory board to the president. A meeting for that is where Trump called Cook “Tim Apple.”

While Trump might sometimes clash with Apple and Cook, the truth is they’re happy to get along when it’s good for them. And while Cook may speak out about the Trump-backed policies he disagrees with, in continuing to appear with him and joke with him when it’s good for business, he’s also implying that as long as Apple is making money, the rest of it is okay.

Tim Apple is and isn’t funny

The Tim Apple thing started on Wednesday when Trump at a meeting for the American Workforce Policy Advisory Board called Cook “Tim Apple.” Makena Kelly at The Verge picked up on it and transcribed Trump’s remarks:

The White House in its official transcript tried to play it off as though Trump paused in his speech by adding in a dash so it reads “Tim – Apple.” But Trump definitely called Cook “Tim Apple.” Look at the clip.

People quickly picked up on the flub — and the jokes ensued.

Even Ivanka Trump laughed at it.

Cook played along, too, changing his Twitter name to Tim and the Apple logo.

Trump’s gaffe is funny, as is Cook’s decision to play along. But it’s also another example of Cook implicitly endorsing a president whose policies he has publicly said are harmful. The same guy who delivered Apple the tax cuts it so enjoys is the one who on the campaign trail called for a ban on Muslims coming into the country.

After Trump’s surprise election in 2016, Cook sent a memo to Apple employees trying to put workers at ease, which BuzzFeed News obtained. It doesn’t mention Trump, but it clearly acknowledges many of the anxieties about him. “Our company is open to all, and we celebrate the diversity of our team here in the United States and around the world — regardless of what they look like, where they come from, how they worship or who they love,” he wrote.

Cook spoke out when Trump rescinded the Deferred Action for Childhood Arrivals (DACA) program, which protects young undocumented immigrants who came to the US as children. After the Muslim ban, Cook said that “Apple would not exist without immigration” and said the company didn’t support the policy. He called family separation at the border “inhumane” and “heartbreaking.”

Yet Cook keeps playing along with Trump when it’s good for Apple. He’s talked to Trump about trade policy and China and tried to push him in a way that’s best for the company. Trump has even reassured Cook that Apple won’t be hurt by China tariffs. Apple isn’t building its iPhone in the United States (I have a full explainer on why that wouldn’t make sense anyway), but it’s making investments and announcements about them where it can, and in a way that’s sure to make Trump happy. As far as Trump’s criticisms go, he makes them when it’s good for him, politically, but it’s not clear there’s ever any bite to his bark.

When Cook this week winked at Trump’s “Tim Apple” flub, while a lot of people laughed, others noted the cynicism in play.

“Sure Cook might be actively propping up Trump while raking in a tax windfall, but I guess he is in on the joke about what a colossal idiot the president is, so that’s cool,” Susan Hennessey, the executive editor at Lawfare, tweeted.

It’s not to say that the calculation for Cook or any other executive is easy when it comes to Trump. CEOs are supposed to do what’s best for their companies’ bottom lines, even if that means hobnobbing with a president they might not agree with. But Trump has crossed so many lines and corporate America keeps coming back to him. Remember when all of those CEOs quit the advisory boards to Trump after his comments on racist violence in Charlottesville, Virginia? They’re back in the orbit.

Apple is one of the most iconic brands in the world, and Trump knows a lot about branding. He is well aware that having Apple around, and Cook beside him, is good for him. And Apple and Cook appear to be willing to continue to give him that boost.