Jury selection begins Monday in the trial of Tom Barrack, the billionaire fundraiser for former President Donald Trump who is charged with illegally lobbying for the United Arab Emirates while seeking investments from two UAE sovereign wealth funds.

Barrack chaired Trump’s 2016 inaugural fund, a position federal prosecutors in Brooklyn have said he used to influence U.S. foreign policy while Trump was a candidate and in the early days of the administration.

He has pleaded not guilty to the charges against him, which include acting as an agent of a foreign government and obstruction of justice.

MORE: Who is Tom Barrack?

Barrack was arrested in California in July 2021, accused of using his connection to Trump to surreptitiously promote UAE interests. The trial is expected to last five weeks, attorneys said during a hearing earlier this year.

According to the indictment, The UAE worked through Barrack "to influence United States foreign policy in the first 100 days, 6 months, 1 year and 4 years of the Trump administration."

Barrack, prosecutors said, "allegedly took numerous steps in the United States to advance the interests of the UAE," without notifying the Attorney General, a violation of federal law. 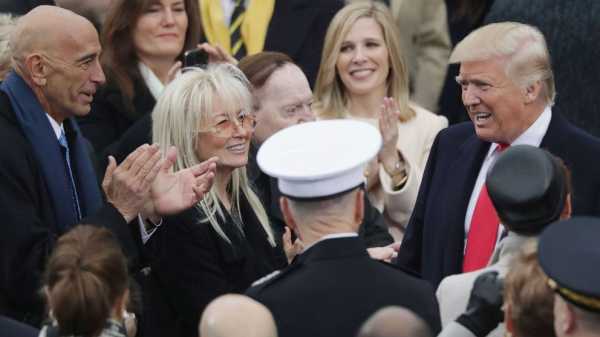 During an initial conversation with an Emirati national security official in 2016, the indictment quoted Barrack touting his access to Trump: "In his response, Barrack wrote that Emirati Official 2 should know that Barrack had been a thirty-year partner with the Candidate and that Barrack had staffed the Campaign."

At the same time, Barrack and a co-defendant "also made numerous and concerted efforts … to solicit the assistance of United Arab Emirates officials … in obtaining hundreds of millions of dollars in investments," according to charging documents.

The UAE funds committed nearly $400 million to Barrack’s investment management firm, the indictment said, though it did not make clear whether Barrack’s firm ever received the money.

Barrack founded Colony Capital but U.S. District Judge Brian Cogan has limited the ability of prosecutors to make Barrack’s wealth an issue. For example, they cannot show photos of his luxury properties and a plane, Cogan ruled last week.

"There is little if any probative value in admitting these photographs and a high potential for unfair prejudice. Admitting generic photographs of three lavish properties does not provide any helpful context here," Cogan said.