President Joe Biden and first lady Jill Biden on Sunday paid their respects to Queen Elizabeth II as world leaders gathered in London ahead of the late monarch's state funeral.

The Bidens gave tribute to the queen as her coffin lie in Westminster Hall, with the president putting his hand over his heart. He and the first lady also signed condolence books, with the president writing that she "hosted everything with dignity and respect."

"Queen Elizabeth II lived her life for the people she served with wisdom and grace. We will never forget her warmth, kindness, and the conversations we shared. May God grant her eternal rest," the first lady added.

"It's a loss that leaves a giant hole and sometimes you think you'll never, you'll never overcome it," Biden told the press, echoing a frequent refrain he tells grieving relatives. "But, as I've told the king, she's gonna be with him every step of the way, every minute, every moment and a reassuring notion. So, it's all the people of England and all the people of the United Kingdom, our hearts go out to you and you were fortunate to have had over 70 years. We all were. The world's better for her." 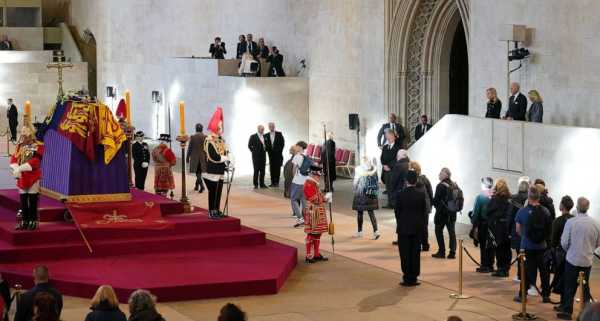 President Joe Biden and First Lady Jill Biden (at right on platform) pay their respects as they view the coffin of Queen Elizabeth II, as it Lies in State inside Westminster Hall, at the Palace of Westminster in London on Sept. 18, 2022.Joe Giddens/POOL/AFP via Getty Images

The president said Queen Elizabeth reminded him of his mother and praised her commitment to service.

"I think what she gave is a sense of, maybe, above all, the notion of service. We all owe something. There's something within our capacity to do that can make things, not just the world better but your neighborhood better, your household better, your workplace better and that's what she communicated to me, anyway, and it was an honor to meet her, an honor to meet her," he said.

They left for the United Kingdom on Saturday and will attend the state funeral for the queen on Monday. 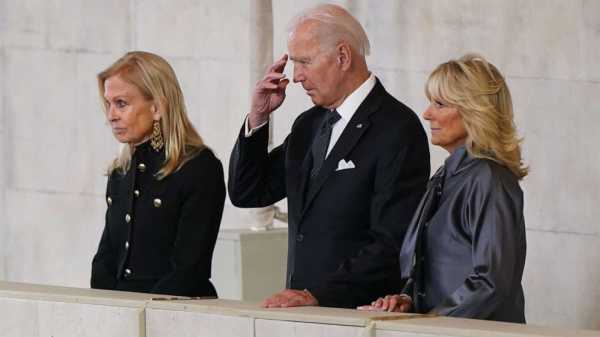 President Joe Biden and First Lady Jill Biden pay their respects as they view the coffin of Queen Elizabeth II, as it Lies in State inside Westminster Hall, at the Palace of Westminster in London on Sept. 18, 2022.Joe Giddens/POOL/AFP via Getty Images

The trip comes at a time of political change in the U.K., where Prime Minister Liz Truss just took office. She and President Biden will hold their first bilateral meeting in New York on Wednesday when both are there for the U.N. General Assembly.

The queen died at age 96 after serving as head of state for 70 years, a record tenure for a British monarch that spanned 14 U.S. presidencies. Buckingham Palace announced on Sept. 8 that she "died peacefully" at Balmoral Castle, her Scottish estate.