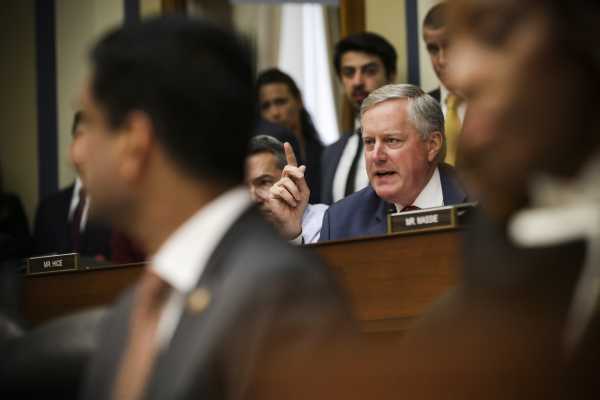 Michael Cohen’s congressional testimony before the House Oversight Committee on Wednesday generally did not reflect well on the character of President Donald Trump. He accused Trump of committing crimes while in office; lying to the public about his business dealings in Russia and tacitly encouraging Cohen to do the same; and ordering Cohen to bully Trump’s alma maters out of releasing his school records.

But the most contentious moments between Democrats and Republicans on the committee were about racism — or rather, whether it was appropriate to use the word “racist” to describe first Trump himself, and then Rep. Mark Meadows (R-NC).

The exchanges — a morning back-and-forth between Cohen and Meadows, followed by a very heated argument between Meadows and Rep. Rashida Tlaib (D-MI) at the end of the day — exhibited a lot of the worst problems with the way people talk about racism in the early 21st century, and Trump’s racism in particular.

Cohen accused Trump of being “a racist” as a way to establish that Trump was a bad person. Meadows countered it by pointing out an individual black person close to Trump: former Trump Organization employee and current Housing and Urban Development official Lynne Patton.

This is not is a helpful way to talk about racism. But when Tlaib and Rep. Ayanna Pressley (D-MA) pointed this out during their questioning, they were accused of violating congressional decorum.

Tlaib said Meadows’s use of Patton as a “prop” was a “racist act” — an accusation Meadows took as an allegation that he himself was a racist. Meadows’s ensuing effort to defend himself against the accusation Tlaib wasn’t making culminated with an awkward profession that he counts Committee Chair Elijah Cummings, who is black, as a friend.

Nothing new was learned as a result of any of this. But it illustrated why treating “racist” as an insult that is leveled against an individual person based on character leads to overheated rhetoric and insufficient self-examination.

Here’s what Cohen said in his prepared testimony:

These comments aren’t relevant to Cohen’s testimony about Trump’s criminal involvement, but Cohen brought them up to show that Trump’s “true” character is repulsive: that as Cohen put it in his prepared statement, “I know what Mr. Trump is. He is a racist. He is a conman. He is a cheat.”

This is already an overly narrow way of thinking about racism — and one that encourages politicians, in particular, to shallow he-said-she-said conversations about race. As my colleague Jane Coaston has written (and you should really read her piece for a fuller treatment of this):

That’s exactly what Meadows went after Cohen for: calling Trump “a racist” as an insult.

In response, Meadows cited Lynne Patton — a longtime Trump business associate who (among other things) planned Eric Trump’s wedding, who currently oversees the New York and New Jersey region for the US Department of Housing and Urban Development, and who is a black woman — to champion Trump’s anti-racist bona fides:

Meadows didn’t quite pull the full “I have a black friend” maneuver, in which an individual defends against claims of racism by saying they respect individual black people — instead, he paraphrased Patton’s own assessment that Trump isn’t a racist. But he is saying that because a black woman who has known Trump for years says that Trump is not a racist, he cannot actually be a racist. (Cohen’s response — “Neither should I, as the son of a Holocaust survivor” — relied on exactly the same premise, that individuals of particular heritages can individually pass judgment in whether someone is or is not a racist.)

That’s not a helpful way to talk about racism. It’s not a surprise, for example, that someone might be willing to say things to a fellow white person they wouldn’t say in the presence of a person of color. But it’s a foreseeable consequence of treating “racist” as nothing more than an epithet.

Meadows then challenged Cohen to produce tapes of the racist comments he had mentioned in prepared testimony — implying that since Cohen had taped some of his conversations with Trump, he would have captured anything newsworthy on tape. After all, Meadows said, “I’ve talked to the president over 300 times. I’ve not heard one time a racist comment out of his mouth in private.”

The idea that there is some smoking-gun racist comment that Trump has made and that might be caught on tape somewhere isn’t a new one; last year, former Trump aide Omarosa Manigault wrote about the Trump campaign’s reaction to a rumored tape of Trump saying the n-word while on the set of The Apprentice.

But as my colleague P.R. Lockhart wrote at the time, the obsession with private racist comments deliberately ignores everything Trump has said and done in public — stretching all the way back to the beginning of his real estate career, when he was sued by the federal government for violating anti-discrimination laws — that could be characterized as reflecting and perpetuating racism.

If the point of talking about racism is to address the ways that racial inequities are perpetuated in America today, maybe it would be better to discuss the Trump administration’s insistent support for restrictive voting laws.

If it’s to talk about how some people are treated as less full citizens than others because of ethnicity or nationality, it might be worth examining the difference between Trump’s response to hurricanes on the mainland United States and his obsessive interest in cutting disaster aid to Puerto Rico after Hurricane Maria.

If it’s to talk about how some people are seen as less human than others, it might be worth thinking about that famous “shithole countries” comment after all. According to the sources who’ve leaked details about it, the context of that comment was that Trump didn’t want to extend permanent legal status to immigrants from Central America with Temporary Protected Status.

None of this is to say that these policies are ipso facto racist. It’s to say that what Trump has done as president of the United States matters more to the racial state of affairs in America than what he says in private.

“That Trump allegedly saying the n-word is positioned as eye-opening proof of his racism is part of a larger issue that continues to paint racism as solely being about bad words and deeds rather than policy and white supremacy,” Lockhart wrote.

When Democrats tried to point out racist actions, Republicans demanded reassurances that they weren’t bad people

Several hours after the exchange with Meadows, two first-term representatives on the committee — Pressley and Tlaib — used their allotted questioning time to push back on Meadows’s argument.

Pressley argued that Trump’s record as president was sufficient evidence of racism:

Tlaib, for her part, criticized Meadows for bringing in Patton (who reportedly left the Cohen hearing shortly after Meadows talked about her in his questioning) as a prop:

That’s when things got tense.

Meadows asked that her statement be struck from the record, on the basis that it was “referring to an individual member of this body” — in other words, that it was a personal attack on Meadows. Tlaib read the comment again, making it clear that “I am not calling the gentleman, Mr. Meadows, a racist, I’m saying it is a racist act.”

Chair Elijah Cummings (D-MD) asked her to clarify that “you were not intending to call Mr. Meadows a racist, is that right?” and Tlaib confirmed she was not.

That didn’t stop Meadows from launching into a soliloquy about how offensive it was for Tlaib to accuse him of racism — mentioning both his own black nieces and nephews and his friendship with Cummings, who is black.

Cummings took pains to reassure him that “I could see and feel your pain. I feel it. And so — and I don’t think Ms. Tlaib intended to cause you that, that kind of pain and that kind of frustration.”

Tlaib made an effort to refer to racist acts rather than people, and it wasn’t enough to stop Meadows from taking it as a personal attack — and one that he could rebut by talking about his own personal relationships with individual black people. And Cummings responded by making sure his friend Meadows knew he wasn’t a bad person and wasn’t being called one. Meadows’s feelings, in other words, became the focus — not the propriety of what he had done in citing Patton, and not anything that Michael Cohen, the sole witness of the hearing, actually said.