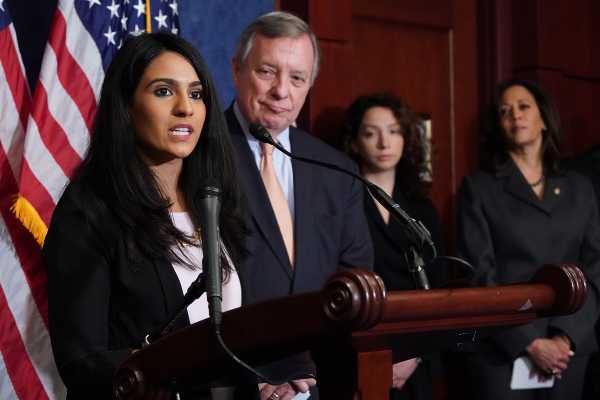 The White House’s proposed framework for an immigration bill, released Thursday (with an official unveiling expected Monday), isn’t uncompromisingly restrictionist. In allowing 1.8 million unauthorized immigrants who came to the US as children (including the 690,000 immigrants affected by the end of the Deferred Action for Childhood Arrivals, or DACA, program) to eventually become US citizens, it’s even relatively (as Sen. Tom Cotton (R-AR) put it) “generous.”

But that endorsement from Cotton — himself one of the most hardline members of Congress on immigration — is telling.

The White House’s framework is more moderate than its previous demands when it comes to the treatment of unauthorized immigrants currently living in the US.

But it doesn’t moderate the White House’s previously stated position that substantial cuts are needed to legal immigration, specifically family-based immigration. Legal immigration hawkishness has rapidly gone from an outlier position within the GOP to the core conservative ask.

That shift could, in theory, put political pressure on Democrats. For years, the Democratic agenda on immigration has been shaped by the desire to protect current unauthorized immigrants. The White House’s framework forces Democrats to choose: Are they willing to win citizenship for 1.8 million unauthorized immigrants by abandoning future immigrants?

The Democratic Party’s transformation over the past decade into the party of immigrant rights has been easy to track: A visible and vocal group of immigration advocates, led by DREAMers (the generation of unauthorized immigrants who came to the US with their parents as children), has pushed the Democratic base to accept immigration as a key progressive issue.

Democratic politicians have abandoned attempts at “tough but fair” immigration centrism (which weren’t winning them support from immigration skeptics anyway) and have instead started speaking out against the immigration enforcement regime that’s been built up in the US since the creation of Immigration and Customs Enforcement under George W. Bush.

The focus of the progressive immigrant rights movement has been squarely on immigrants who are currently in the US without status: calling for them to have access to legal status and citizenship and decrying their detention and deportation.

They’ve gone from being “illegal immigrants” to “undocumented immigrants” to, among many progressives, “aspiring Americans” or “Americans in all but paperwork.” They may not be able to vote, but they’re recognized as an activist constituency within the Democratic Party.

That agenda is directly in conflict with the one immigration hawks have pushed for the past decade. Hawks have been primarily concerned that not enough is being done to enforce the law against unauthorized immigrants; they’ve pushed to make it mandatory for employers to use the E-Verify system to check the legal status of workers (thus, in theory, making it impossible for the 8 million unauthorized immigrants in the workforce to stay employed), and for ever-tighter connections between local law enforcement and federal immigration officials.

The framework — at least as it was released on Thursday — doesn’t include most of the changes to interior enforcement proposed in the bill written by Rep. Bob Goodlatte (R-VA), a hardline proposal that the White House had previously held up as a model.

There’s one provision in the White House framework that could make life much harder for unauthorized immigrants: a proposal to allow immigrants who’ve overstayed their visas to be deported without an immigration court hearing (though it’s not clear yet whether this would apply to immigrants who have overstayed visas already).

While the framework is nearly as hardline on restricting future legal immigration as previous White House proposals have been — including eliminations of several family-based immigration categories and the diversity visa lottery — it would allow people who are currently waiting to enter the US on family-based visas to stay in line. (How exactly this would work is the biggest outstanding question — it could mean the difference between an immediate cut of hundreds of thousands of immigrants per year, and a reduction that takes several years to fully take effect.) So it removes one key objection that could be made by current immigrants who are trying to bring over family members.

Future immigrants would be huge losers under this proposal. Not only would family members who weren’t spouses or minor children have no way to settle in the US, but the framework appears to propose serious restrictions in asylum law for people (especially children and families) trying to come to the US for humanitarian reasons.

Future immigrants don’t have a political constituency in the Democratic Party — certainly not in the way current ones do. So in theory, the White House framework is setting up a choice: By yielding on immigrants already here, it’s daring the Democratic Party to reject a deal that would help the loudest progressive advocates for reform.

The response from Democrats and immigrants has been loud and unanimous

It’s much easier for Democrats to make that choice, though, if the very people who would benefit from a deal are speaking out against it in solidarity with those who’d be hurt. And that’s exactly what immigrant rights groups have done.

United We Dream, the largest DREAMer advocacy group, called the framework a “white supremacist ransom note.” “Our fear, our pain, and our lives must not be used to shackle our parents and ban those seeking refuge; we must not be used to tear apart the moral fabric of this country,” wrote the organization’s advocacy director Greisa Martinez Rojas in a statement.

DREAMer activists spoke of themselves as “hostages” under the White House proposal. “They can’t do this on the back of Dreamers,” activist Erika Andiola tweeted.

The immediate and vociferous response from immigrants themselves was followed by Democrats in Congress; first, Rep. Luis Gutiérrez (D-IL), the member most closely associated with the immigrant rights movement; then progressives less closely associated with immigration, like Sen. Elizabeth Warren (D-MA); then members of Democratic leadership like Senate Minority Whip Sen. Dick Durbin (D-IL), the foremost champion for DREAMers in the Senate.

It was every bit as immediate a condemnation as the White House’s previous efforts to articulate its immigration agenda had been — even though the agenda itself was different. The immigrant rights movement has made the calculation that it is not simply a constituency group to protect the immigrants currently in the US; it is defending, and pushing Democrats to defend, the idea of immigration itself.