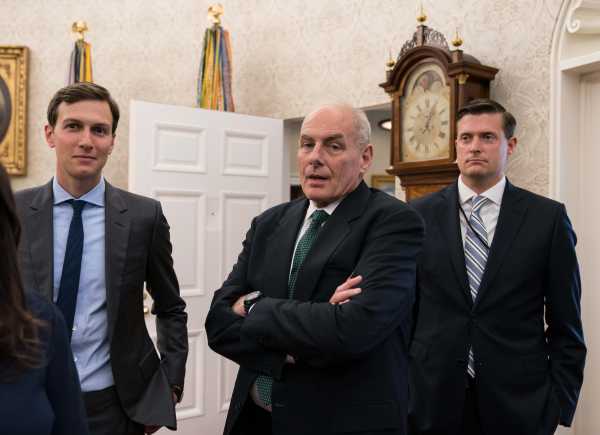 The White House is standing by Chief of Staff John Kelly as questions persist about his handling of the Rob Porter domestic abuse allegations and amid talk that the retired general might soon be out the door.

Multiple Trump administration officials came to Kelly’s defense on Sunday, arguing that he has President Donald Trump’s full backing and brushing aside questions about how he dealt with Porter, the White House staff secretary who resigned on Wednesday after two of his ex-wives and a former girlfriend accused him of physical and emotional abuse. Kelly, White House counsel Don McGahn, and others knew about the allegations well before they were surfaced by the media because of an FBI background check as part of Porter’s hiring process; Kelly was informed a few weeks ago that the FBI recommended Porter be denied full security clearance. And yet, even when the abuse allegations were first reported to the public this week, Kelly came to Porter’s defense. He has since backed away, but the storm brewing around him is far from over.

Office of Management and Budget Director Mick Mulvaney, whose name has been floated as a potential replacement for Kelly should the general exit, told CBS’s Major Garrett on Face the Nation on Sunday that questions about Kelly are simply media speculation. “To watch the media cover the West Wing and then go to work there is like night and day. And to believe the media that there’s complete disarray, there’s a bunch of infighting. And it’s simply not the case that the West Wing continues to function. It functions well,” he said. He said Kelly is doing “a really great job,” and “most importantly, I think the president thinks he’s doing a great job, as well.”

White House Legislative Affairs Director Marc Short told Chuck Todd on NBC’s Meet the Press that Kelly is doing an “outstanding job” and isn’t going anywhere. “John Kelly knows that he serves at the pleasure of the president and he will step aside as soon as — anytime the president doesn’t want him to be there,” he said. “But John Kelly has not offered his resignation.” The New York Times reported on Friday that Kelly told White House officials he was willing to step down over his handling of the Porter matter.

Kellyanne Conway, counselor to the president, told George Stephanopoulos on ABC’s This Week that Trump has “full confidence” in both Kelly and White House Communications Director Hope Hicks, who is reportedly dating Porter and helped draft a statement initially defending him. “I spoke with the president last night about this very issue, and he wanted me to reemphasize to everyone, including this morning, that he has full confidence in his current Chief of Staff General John Kelly, and that he is not actively searching for replacements,” Conway said. She said the same thing on CNN’s State of the Union with Jake Tapper. (In February 2017, Conway also said the president had “full confidence” in then-National Security Adviser Michael Flynn — just hours before his resignation.)

It isn’t just Trump officials who have come to Kelly’s defense, however. Former Homeland Security Secretary Jeh Johnson, who served under the Obama administration, told CNN’s Tapper on Sunday he believes Kelly should stay on, though seemingly for reasons more practical than moral. “I think as long as Donald Trump is president our government is best served if John Kelly is in the job of chief of staff,” he said.

The Porter story, and Kelly’s handling of it, isn’t going away

On Sunday, Axios reported that Porter is telling associates a different story about the allegations against him and their fallout — with a different timeline. In this version, Porter says he told Kelly that the Daily Mail story that first surfaced the allegations would be bad and never misrepresented anything to him. (Axios reported Kelly says Porter downplayed what the story would be about.) Porter also says that some senior White House officials urged him to “stay and fight.”

President Trump has only added fuel to the fire surrounding Porter and, by extension, Kelly. On Friday he told reporters he hopes Porter has a “wonderful career” ahead of him and pointed out that Porter says he is innocent. On Saturday, he sent out a tweet lamenting “lives shattered” by a “mere allegation” and asked what’s happening to due process. (For what it’s worth, Mulvaney on Sunday said he thought the tweet might actually have been a reference to Las Vegas mogul and former Republican National Committee finance chair Steve Wynn.)

As Vox’s Dylan Matthews pointed out this week, Kelly’s tenure as chief of staff has been rocky far beyond Porter, but this might be the event that causes his departure. “It became extremely, abundantly clear that Kelly had to go when he went to bat for White House staff secretary Rob Porter,” Matthews wrote.

Even so, Kelly appears to be sticking around. At least for the time being.