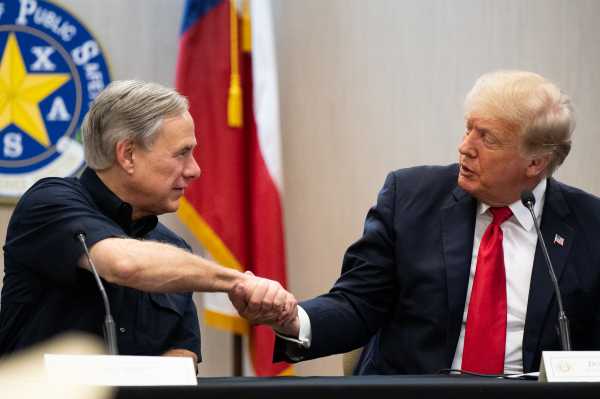 Purporting to pick up where former President Donald Trump left off, Abbott has announced a plan for Texas to build its own border wall and arrest migrants who attempt to scale it.

But given the litany of practical and legal concerns that could hold up the project — from fundraising to seizing private property to the limited powers of state government over immigration — it’s unclear if he’ll actually be able to do it.

Yet in some ways that may be beside the point: His rhetoric alone may have already served its purpose of appealing to his right-wing base ahead of his reelection campaign and the midterm elections in 2022.

The Trump administration built about 450 miles of barrier on the US-Mexico border, but most of it was in Arizona. To finish the wall along the Texas border, Abbott has put forth a $250 million “down payment” drawn from state disaster relief funds and crowdfunded almost another $500,000 as of June 23. That’s still a drop in the bucket of what he might need to finish the project, which the federal government estimated could cost as much as $46 million per mile in some sectors of the border.

Though surveys have shown that Republican voters in Texas overwhelmingly support the project and rate border security as one of the top issues facing the state, Abbott is likely to run into various roadblocks in the courts. The League of United Latin American Citizens (LULAC) has already threatened to sue, suggesting that he is overstepping his executive powers. Property owners on the border historically haven’t been willing to surrender their land to facilitate construction of the wall, leading to drawn-out legal battles there as well. And while Abbott has suggested that state law enforcement could arrest migrants who attempt to breach the wall on criminal trespassing charges, legal precedent suggests that won’t hold up.

The governor is undeterred by these potential challenges, though, and says he is committed to seeing the project through.

But even if he doesn’t succeed in constructing a single mile of wall, he has already weaponized the project against the Biden administration as it grapples with a spike in the number of arrivals of children and families at the southern border.

“The Biden administration has abandoned its responsibility to apply federal law to secure the border and to enforce the immigration laws and Texans are suffering as a consequence of that neglect by the Biden administration,” Abbott said. “In the federal government’s absence, Texas is stepping up to get the job done.”

It’s not clear whether Abbott can legally build the wall

There are a lot of questions about whether Abbott’s project is even legal.

First of all, immigration policy is the purview of the federal government, not state governments. The US Congress has the power to pass immigration laws, the executive branch has broad discretion to enforce those laws, and federal courts have historically refrained from interfering.

While Abbott has argued that he is stepping in to fill a gap in immigration enforcement that the Biden administration has left open, he could be overstepping his powers as governor.

“I can appreciate Governor Abbott’s frustration with regard to the federal government’s lack of addressing immigration reform as a whole,” said Democrat Eddie Treviño Jr., county judge for Texas’s Cameron County, which is located along the border with Mexico. “But that’s a federal issue. And the way to get it solved would be to work collaboratively and cooperatively at the local, state, and federal level.”

LULAC has indicated it is considering asking a court to block Abbott from continuing with the project, characterizing it as a “huge waste of taxpayer money, and very likely illegal.” “I don’t see that he has the authority to do what he’s trying to do without the consent of the federal government,” said Rodolfo Rosales, LULAC’s Texas state director.

It’s also not clear whether Abbott can use disaster funds to pay for the wall under Texas state law. He declared a disaster for 34 counties in the state last month due to a recent increase in unauthorized immigration at the border, freeing up resources to deal with the problem and allowing him to suspend state laws and regulations that would impede any solutions.

But the limits of his authority to do so have been questioned in the recent past, including in the context of the coronavirus pandemic, when he invoked the same powers to shut down businesses last year.

And the current levels of unauthorized immigration might not truly constitute a “disaster.” While officials reported that the number of migrant apprehensions at the border in May was nearly eight times the total in the same month last year, that doesn’t necessarily mean the actual number of migrants trying to cross the border is higher.

Those numbers don’t account for the fact that there has been a surge in adults who have been caught trying to cross the border multiple times due to policies enacted during the pandemic. In 2020, 26 percent of migrants apprehended by Border Patrol had been caught more than once, compared to 7 percent the previous year.

Critics argue Abbott is merely using the disaster declaration to make an end-run around the state legislature to build the wall. “A governor should not be able to circumvent the legislative process by declaring such matters to be emergencies and then implementing whatever measures he wishes,” state Rep. John Turner (D-Dallas), told the Texas Tribune. “If a governor can commence such a long-term, multi-hundred-million-dollar public works project under the cover of emergency powers, it is difficult to know what the limits of those powers are.”

Abbott will also almost certainly face opposition from private landowners on the border, who have already fought both the Trump and Biden administrations in the courts to prevent the federal government from seizing their land in order to construct the wall. There are more than 130 ongoing cases brought by property owners, according to the Texas Civil Rights Project, a legal aid organization that is representing them.

“The resistance to property takings in the state is a big part of the conservative culture here,” said James Henson, director of the Texas Politics Project at the University of Texas Austin. “It’s been an obstruction to a lot of different things, including infrastructure and rail construction.”

Abbott, however, seems to think those landowners will have a change of heart and volunteer to give up their land. ​“My belief based upon conversations that I’ve already had is that the combination of state land as well as volunteer land will yield hundreds of miles to build a border wall in Texas,” he said.

Abbott’s plans to arrest migrants at the border on various criminal charges, including trespassing and vandalism, would also likely face legal challenges if implemented.

Abbott has threatened to put such migrants “in jail for a long time,” but legal precedent isn’t on his side: The Supreme Court prevented Arizona Republicans in 2012 from similarly arresting migrants on trespassing charges, on the basis that states cannot enforce immigration law. It’s possible, however, that the 2012 ruling could be overturned with several new Trump-appointed justices on the Court.

Abbott and the Texas GOP’s embrace of a border wall seems to be part of their strategy for the 2022 midterm elections. Abbott is also up for reelection in 2022, but some have also suggested he could be setting up a run for president in 2024.

The Texas Republicans appear to be trying to appeal to their right-wing base in order to fend off potential primary challengers. There isn’t much concern about Democrats launching a serious offense in the general given that the party’s promises of Texas turning blue didn’t come to fruition in 2020.

Republicans in the state have also recently passed legislation aiming to fire up their base that removed the requirement of a permit to carry a handgun and established an effective ban on abortion. And Abbott’s agenda for an upcoming special session of the state legislature involves more items related to border security, restrictions on voting, and preventing the teaching of critical race theory in schools.

“It’s hard not to conclude that Republicans are very focused in the short and medium term on primary elections coming up in 2022,” the Texas Politics Project’s Henson said. “I don’t sense a lot of Republican concern right now about the general election. And that’s reflected in a public agenda and communication strategy among Republicans that is moving ever rightward. The wall is the epitome of that.”

Texas Democrats have also said Abbott’s wall project is a distraction from his failures to address Texas’s power grid problems in the wake of a catastrophic winter storm that left millions of people in the cold and without power for days — a subject that went notably unaddressed in his agenda for an upcoming special session of the state legislature.

But while there has been pushback from border counties and Democratic officials, the majority of Republican voters in Texas do support building the wall: about 74 percent, according to a recent survey by the Dallas Morning News and UT Tyler.

“Nothing dominates the public opinion landscape of Texas Republicans like immigration and border security,” Henson said.

But the Texas GOP’s decision to embrace anti-immigrant rhetoric as an apparent midterm strategy could potentially be a risky one — and one that has backfired on Republicans nationally before.

In 2016, immigration was seen as an issue that helped mobilize white grievance voters, as well as some swing voters in places like Michigan, Wisconsin, and Pennsylvania, in favor of Republicans. It was a top motivating issue, with 70 percent of voters saying immigration was “very important,” more so than Supreme Court appointments, race relations, the environment, and abortion. Views of immigration also represented one of the biggest divides among people who voted for Trump and those who voted for Hillary Clinton.

The strategy, though, had limits, which became evident during the midterms in 2018, when Trump stoked fear about an “invasion” of migrant caravans and foreign “criminals” and “smugglers” while stumping for Republican candidates nationally. The Republican pollster David Winston later concluded that the party’s focus on immigration, rather than the then-strong economy, is what ultimately cost Republicans the House majority that year, eroding their support among independents. Democrats, who largely focused on health care instead, took back 41 House seats.

Still, that’s not to say that the strategy can’t work for Republicans in Texas, who have time and time again pursued anti-immigrant policies and rhetoric designed to cultivate fear about disorder at the border.

“It hasn’t hurt them in the same way,” Henson said.

Biden is turning back Haitian migrants at sea, echoing a shameful chapter in US history