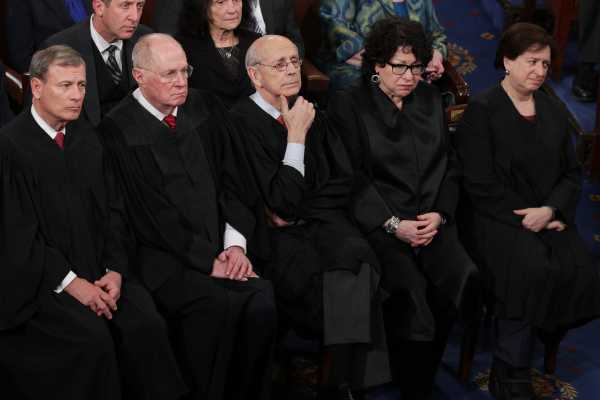 Immigration and Customs Enforcement agents have the power to arrest people who aren’t US citizens and detain them for months or years, based on past convictions, with no chance of release on bond. They can do this even to green card holders, and even if the convictions were fairly minor and the immigrant completed the sentences (or paid the fines) years ago.

That’s what the Supreme Court ruled Tuesday in the case Preap v. Nielsen. In a 5-4 ruling along ideological lines, the Court’s conservative majority overruled a Ninth Circuit ruling that tried to limit which immigrants would be subject to mandatory detention without bond — something that a 1996 immigration law requires for immigrants with certain criminal histories or suspected terrorist ties.

The court’s decision doesn’t create any new powers for ICE. In most of the country, immigrants were already ineligible for bond hearings if they were picked up for long-ago crimes, and often they were consigned to months of detention as they languished in a historically large court backlog. It just ends a brief period in which the West Coast, home of the Ninth Circuit, was the exception to that rule.

Instead, the ruling is noteworthy mostly because of the court fight it sets up down the road.

The court’s liberals appear increasingly worried that the mandatory-detention law itself is unconstitutional. “I fear,” wrote Justice Stephen Breyer in a dissent for the Court’s four liberals, that Tuesday’s ruling “will work serious harm to the principles for which American law has long stood” — principles that say that, as a rule, the government can’t detain anyone indefinitely without showing cause and that people who have served criminal sentences can’t be summarily reimprisoned for the same crime.

Those principles don’t hold in quite the same way when it comes to the immigration system — even though detention and deportation may seem as harsh as criminal punishments, they’re technically part of a civil system that doesn’t give the same protections to defendants. But as immigration enforcement has swelled in the 21st century, that’s started to seem to some like cognitive dissonance.

Even the conservative majority didn’t argue that mandatory detention as it exists is constitutional. Instead, it all but invited a challenge to the constitutionality of the law — even while using that law’s grammar to justify a policy that could result in detention of thousands more immigrants in the meantime.

Mandatory detention without bond is legal. The question is whether it applies years after the crime.

The 1996 Illegal Immigration Reform and Immigrant Responsibility Act (IIRIRA) lays out certain categories of immigrants who are supposed to be picked up by federal immigration agents “when they are released” from criminal custody. (The categories are theoretically based on committing particularly serious or offensive crimes or having terrorist ties, but in practice, some of the grounds are so elastic that an immigrant won’t even know whether he qualifies just based on his criminal conviction.) Those immigrants then have to be detained.

In a decision last year, the Supreme Court held that those immigrants were not allowed to demand bond hearings — they had to be detained until their cases were resolved, no matter how long that took. The decision Tuesday examined whether that was also true of immigrants who were detained by immigration agents long after they were released from criminal custody, The lead plaintiff in the case, Mony Preap, was a green-card holder who was picked up by ICE seven years after serving sentences for two minor drug convictions, then detained for months as ICE sought to strip him of his green card and deport him.

Legally, the Court’s decision was a question of grammar: If the government was supposed to pick up mandatory detainees “when they are released,” but did not, would they still count as mandatory detainees? The conservative majority said yes, they would.

Just as they did in the 2018 mandatory-detention ruling, the conservatives made a point of saying they weren’t considering whether or not the statute was constitutional because that wasn’t directly being challenged in this case.

The implication is that at least some of the Court’s conservatives might believe that Congress gave the federal government unconstitutional amounts of power in 1996, but they’re not going to cross that bridge until they get to it.

Unsurprisingly, Justice Breyer’s dissent for the liberals pointed out the real-world consequences of the grammar dispute: thousands of people with roots in the US might be whisked away by ICE for months or years with no court hearing.

As immigration enforcement has ramped up generally, immigrants with old criminal convictions — including legal immigrants, even green card holders — have become especially appealing targets. Under Obama, immigrants with criminal records were targeted for deportation. Even though ICE isn’t as limited in who it can arrest now, it’s still constrained by how quickly it can track down and arrest people — and unlike immigrants who have stayed under the radar, ICE can use government databases to pick out people with criminal records who are potential deportees.

Nor is there any incentive for ICE not to arrest someone because they couldn’t afford to detain the person. Under Trump, ICE is detaining more people than it ever has before — and more than Congress has funded them for — and simply finding money in other places (either congressional supplements or other agency’s budgets) to pay for it.

Meanwhile, the backlog in immigration courts means that waits for a hearing, even for detained immigrants, can take a much longer time than they did in 1996. The current backlog is more than 800,000 cases; it’s jumped by 300,000 cases since the start of the Trump administration.

The irony is that about 40 percent of the immigrants subject to mandatory detention end up winning their cases and being allowed to stay in the country. But after years or months in detention, it’s possible that some immigrants who would be allowed to stay end up giving up the fight and accepting deportation, rather than continuing to go without income or freedom.

To the Supreme Court’s liberals, the real world impacts are impossible to ignore — they add up to a situation that the Court cannot allow to stand, as Breyer wrote:

In general, Breyer points out, the Court errs on the side of interpreting a law in a way that would make the law constitutional.

The Supreme Court’s liberals think that Tuesday’s ruling did the opposite: It said that the law required a policy that seems obviously unconstitutional to them. The Court’s conservatives aren’t rebutting that possibility — they’re just saying that they need a case that is explicitly about constitutionality to determine whether mandatory detention without bond is constitutional or not.

That case, if it comes, will take years to get to the Supreme Court. In the meantime, a lot of immigrants could be detained without bond under a provision that almost half the Court thinks is unconstitutional and that a majority of it very well might.