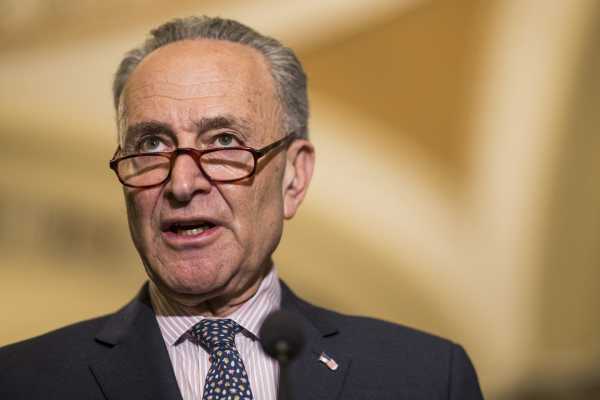 On the eve of 4/20, the Senate’s top Democrat came out for ending the federal prohibition of marijuana.

Senate Minority Leader Chuck Schumer (D-NY) is introducing a bill that would deschedule marijuana, Shawna Thomas reported for Vice. Descheduling would remove cannabis from the strict regulatory standards set by the Controlled Substances Act, the blueprint for US drug policy. That would not fully legalize marijuana across the US, but it could allow states to carry out marijuana reform — from decriminalization to medical legalization to outright legalization — without the threat of federal interference.

“Ultimately, it’s the right thing to do,” Schumer said. “Freedom. If smoking marijuana doesn’t hurt anybody else, why shouldn’t we allow people to do it and not make it criminal?”

Schumer previously supported medical marijuana and letting states experiment with legal pot. His shift effectively makes him more proactive, legislatively, on the issue — and would, if it eventually gets through Congress, upend decades of federal drug policy.

But the bill very likely does not have the votes to get through. Republicans, which control both houses of Congress, remain in firm opposition to legalization. (Although some have flipped, such as former Speaker John Boehner.)

Democratic lawmakers are increasingly on the other side of the issue. Sen. Bernie Sanders (I-VT) came out for descheduling marijuana when he ran for the Democratic presidential nomination in 2016. Sen. Cory Booker (D-NJ) in 2017 put forward a sweeping bill that would not only deschedule marijuana but encourages states to legalize weed with federal money. Sens. Ron Wyden (D-OR) and Kirsten Gillibrand (D-NY), along with Sanders, are co-sponsors on Booker’s bill.

There’s a good reason why top Democrats are coming out in favor of legalizing pot: Their base wants them to. Marijuana legalization has been incredibly popular among Democrats for years — and it seems that Democratic lawmakers are waking up to that reality. 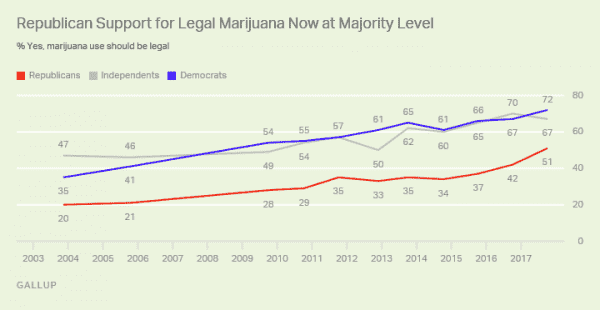 One of the reasons for the growing support may be these experiments with legalization at the state level: Since Colorado became the first state to allow recreational marijuana sales in 2014, the policy has proven to not be the complete disaster opponents of legalization warned it would be. (Although experts caution it’s still too early to judge the full effects.) That has likely driven more Americans to reevaluate their opinions on the issue — so now nearly two-thirds of voters support legalization.

And now, legalizers have the Senate’s top Democrat behind them.