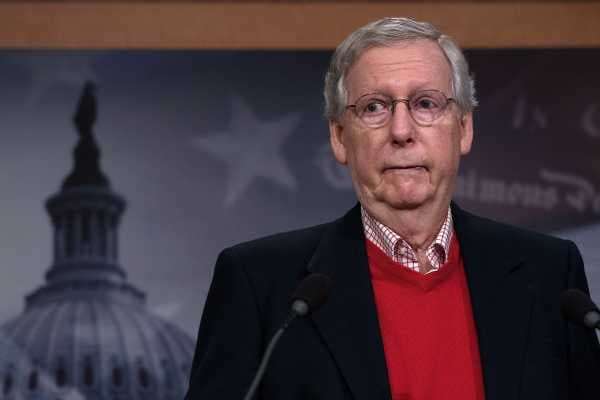 Mitch McConnell has just turned the immigration debate in the Senate, already mysterious and complicated, into something everyone in Washington is struggling to wrap their heads around.

He’s giving the Senate a week of floor debate to address any immigration issue that members wish: addressing the fate of the 690,000 unauthorized immigrants facing the loss of their protections from deportation and work permits under the Deferred Action for Childhood Arrivals (DACA) program, as well as the fate of the other “DREAMers” who came to the US as children and didn’t or couldn’t apply for DACA; Trump’s border “wall”; policy toward asylum seekers and unaccompanied children at the border; the future of legal immigration to the US; and anything else that senators think is particularly important.

Instead of focusing the debate by introducing a bill and using amendments to push it to the right or left, McConnell is starting the debate with nothing. One of two things will happen from there: Either he’ll have each side introduce amendments to build an immigration bill from scratch or he’ll reveal an amendment of his own that represents a compromise as Mitch McConnell defines it.

That raises the question of what represents a compromise on immigration to Mitch McConnell. He’s not tipping his hand in the slightest. And in the meantime, he’s essentially saying, “Immigration: talk amongst yourselves.”

McConnell is starting the debate a week before the Senate’s February recess — meaning that he’s either asking senators to solve America’s most contentious policy issue in five days or telling them to pause in the middle of a floor debate, spend a week being yelled at by constituents, and come back to take some very difficult votes.

The Senate can’t agree on a starting point, so McConnell is opening the debate up even wider

Because immigration is such a broad and complicated issue, and it’s not clear what McConnell’s priorities are in narrowing it, it’s hard to predict what amendments will be offered. But various divides have already erupted among senators — and it’s not clear whether, in any of these debates, one side or the other has the 60 votes necessary to pass.

It’s possible that several of these issues will get rolled into a single amendment in the hopes that that amendment can get 60 votes. But then whichever party is willing to propose such an amendment has to hope that 20 of those senators don’t vote for any other amendment the other 40 senators consider a poison pill.

Various groups of legislators have already introduced bills that include some form of legal status for DACA recipients (or DREAMers more broadly) alongside whatever immigration enforcement provisions or cuts to future legal immigration they think are appropriate trade-offs.

The authors of each of those bills hoped that their bill would be selected as the starting point for the floor debate. But there wasn’t anywhere near a consensus on which bill to pick — or even what issues the bill should address (whether it should include cuts to future legal immigration and/or increased immigration enforcement in the interior; the extent of money it gave for border security; and how many DREAMers it would legalize, and how).

McConnell’s solution to this problem is to choose none of those bills as a starting point.

This actually gives the Senate an even wider menu of options than they already had. Almost all the bills that have been introduced were intended to be, to some extent, compromises — and they were almost all intended to address multiple issues at once.

And this whole floor debate could be a sideshow while real negotiations are happening in private.

Several groups of legislators are theoretically working on new immigration compromises, and none of them have figured one out yet — probably because the biggest splits among legislators aren’t even on policy, but on the question of how important it actually is to pass a bill in the coming weeks. But if they do make a breakthrough, or if McConnell works something out himself, that compromise would be introduced as the new starting point.

But envisioning a compromise bill requires knowing which immigration proposals can get 60 votes in the Senate, which is exactly the problem.

It would be very easy for the open debate next week to result in a bill whose ultimate support is less than the sum of its parts. It could be just as easy for every amendment to fail. The Senate has to thread a very narrow needle — in very little time.