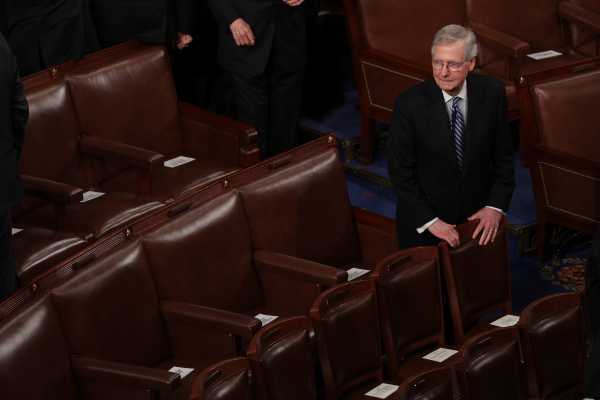 The Senate’s immigration debate is now open. It’s going to be messy from here.

This week is the first real movement in Congress to address the plight of those covered by the Deferred Action for Childhood Arrivals program, which was started by President Obama and which President Trump has promised to end.

About 700,000 people who were brought to the United States illegally as children have been protected from deportation under DACA, but Trump has said that he would rescind those protections in early March, putting the onus on Congress to come up with a permanent solution.

Thanks to a promise made to get out of last month’s government shutdown, the Senate is going first. The chamber cleared its first procedural vote, 97 to 1, Monday evening on an empty shell of a bill. Majority Leader Mitch McConnell has promised an open and fair floor debate, with every proposal getting its chance to earn the 60 votes that would allow it to pass the Senate.

This is dramatically different from the Obamacare repeal and tax reform debates of last year, when Senate leadership more or less crafted its own package — with some back-and-forth from its rank-and-file — and put it on the floor for senators to take it or leave it. This time around, any proposal can get a vote, according to McConnell, and it’ll be up to the senators who are putting it forward to find 60 votes to approve it.

“It gives everybody a shot,” Sen. John Cornyn (R-TX), the majority whip, told me last week. “It ought to be fascinating.”

There is going to be a lot happening on the Senate floor this week. Even if a proposal doesn’t get 60 votes, each vote will send an important signal about where lawmakers actually stand on immigration and all the contentious issues that come with it: DACA, a path to citizenship, Trump’s wall, family-based migration, the works.

Then at the end of it, some kind of plan might actually pass the Senate, putting pressure on the House and the White House to come onboard. We’ll try to keep things straight for you throughout the coming days.

The Senate has opened its immigration debate. That’s it so far.

Under the Senate rules, 60 senators need to agree to a procedural motion known as “cloture” to advance a bill and prevent a filibuster. McConnell called up a random House bill, which is serving merely as a vehicle to set up the action on immigration. (Fun trivia: That random House bill would have allowed federal tax credits to pay for COBRA health coverage when people move out of a job — but only if the House’s Obamacare repeal bill had passed last year.)

He easily got those 60 votes on Monday evening. So the immigration debate is rolling.

In the next day or so, the Senate will take its next procedural step, called the motion to proceed. That will require a majority of the senators (51, if every senator is present). After that, finally, the real action gets underway. Any senator will have an opportunity to bring up a proposal for a vote.

Under the ground rules McConnell has set, a proposal would need to get 60 votes to be approved and replace the House “shell” bill. This isn’t the usual way of doing things: Usually, a bill needs 60 votes to break a filibuster and then 51 votes to pass. But the thinking is that this streamlines the action, by simply having a single 60-vote threshold for amendments rather than going through that two-step process.

McConnell has promised that any proposal can get a vote, and it can pass if it gets the support of 60 senators. Now the question is: Which proposals will be put forward and can any of them get the necessary backing?

There are a lot of immigration proposals out there

After months of negotiations, Congress has no shortage of immigration plans. As Vox has explained, the problem isn’t a lack of ideas; it’s a lack of the right kind of support:

There’s a White House proposal that calls for a path to citizenship for 1.8 million undocumented immigrants who came to the country as children, plus $25 billion to fund a southern border wall, while substantially curtailing family immigration and eliminating the diversity visa lottery program in such a way that would gut the legal immigration system. It’s gained the support of conservatives like Sen. Tom Cotton (R-AR) and has been panned by Democrats and moderate Republicans.

Republican Sens. Chuck Grassley (IA), Thom Tillis (NC), David Perdue (GA), James Lankford (OK), Cotton (AR) and Joni Ernst (IA) and Cornyn (TX) have released a legislative proposal that mirrors the White House’s outline. It has gained McConnell’s support, but it’s not clear whether the majority leader will bring up the proposal as a substitute.

Also in the Senate, a bipartisan agreement between Sens. Lindsey Graham (R-SC) and Dick Durbin (D-IL) would offer legal status, and eventual citizenship, to young unauthorized immigrants, give about a year’s worth of funding for the border wall, and eliminate the diversity visa lottery. But it was panned by the White House and conservatives for being too liberal.

There are a handful of other bipartisan proposals that follow a similar framework in both the Senate and the House, and still more working groups that have yet to come out with proposals, including Sen. Susan Collins’s (R-ME) “Common Sense Caucus,” which developed during January’s three-day government shutdown.

Most recently, a proposal from McCain and Coons would grant eventual citizenship to undocumented immigrants who came to the US as children and have been in the country since 2013, and some border security measures — but not the border wall. The senators put forward the idea as a proposal that could serve as the foundation for the floor debate on immigration this week.

A number of these proposals are expected to see a vote on the Senate floor this week. Something needs to get 60 votes if Congress is going to any affirmative steps toward fixing the DACA issue.