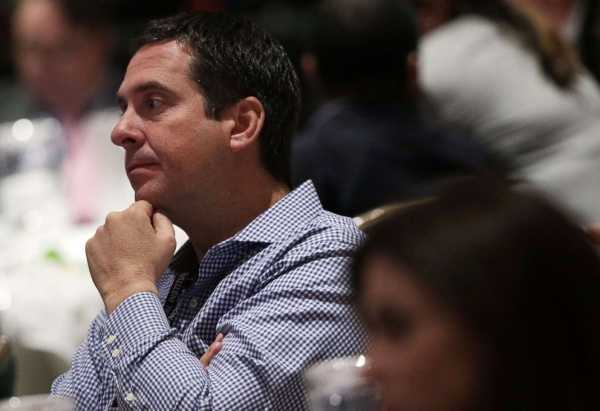 Another week punctuated by both soaring words and petty squabbles made clear that if there are two sides of President Donald Trump, the Republican Party is on board for both of them.

The president on display at the State of the Union address offered a political and electoral roadmap for the party. It’s a story of GOP winning and a growing economy that had Republicans remembering the promise of Trump from the start.

The president on display in seeking to discredit the Mueller investigations – the one now warring with his own FBI and Justice Department, and poised to release the Nunes memo – offers a harsher side of Trump than when he is calling for national unity. But his ability to find allies in Congress and beyond for those fights remains striking.

The memo push is the latest, though surely not the last, example of the GOP rallying to Trump’s defense. The implications are substantial – but the president has plenty of company.

Members of the Republican National Committee ended the week feeling the wind was at their backs.

Meeting in the nation’s capital, most boasted about the president’s State of the Union address and said politically they felt they were on much sturdier ground than they were even just a few months ago.

“Sure there is an anxiety,” Shirlene Ostrov, the Hawaii Republican Party State chairwoman, told ABC News when asked about the coming midterm elections and energy on the left. “But there’s a great message coming around again: national security, tax reform.”

The president told Republican lawmakers that they were unified and these state party leaders conveyed that, too. After all, even establishment folks like what they have seen in terms of policy, including deregulation, drilling and taxes.

They think their team played the government shutdown better and that Democrats sitting down during almost every line of the State of the Union was bad optics, too. As tricky as the midterms may be for this bunch, there are a few Senate seats these RNC strategists think they can pick up.

A basic message about small government still plays well, party spokespeople argued, in races from the northeast to Alaska.

The TIP with Emily Goodin

Republican state chairmen and women and their staff who came in from the states – where the 2018 midterms will take place – are hopeful about their odds in November.

The mood at the Republican National Committee winter meeting at the Hilton Hotel in Washington, D.C., was upbeat and cheerful on Thursday.

Even though polling shows voters favor the Democratic candidate on the generic congressional ballot versus the GOP alternative, these Republicans feel the odds may so ever be in their favor.

The Senate races in particular have these leaders hopeful, particularly those red states who have Democratic incumbents. They mentioned that the government shutdown and voting against tax reform are two things that could hurt these incumbents in the months ahead.

President Donald Trump reflected that mood in his remarks at the GOP retreat in West Virginia on Thursday, where he rallied his party and mentioned the midterms.

“We have to get help from the other side or we have to elect more Republicans,” he said of the GOP trying to accomplish its agenda. “We have a good chance of doing that. ‘18 is going to be very interesting.”

“American history shows that, in the long run, weasels and liars never hold the field, so long as good people stand up.” – Former FBI director James Comey in a tweet about the FBI raising concerns about the GOP memo.

Trump’s communications director under increased scrutiny. President Donald Trump’s communications director Hope Hicks is now under increased scrutiny amid reports that – after concerns were raised about a misleading statement she helped craft about Donald Trump Jr.’s emails—she said they would “never get out.” (Pierre Thomas) https://abcn.ws/2BLpyaV

President Trump has reviewed classified GOP memo and is expected to formally consent to its release, sources say. “Right now, I think it will be that we tell the Congress, probably tomorrow, that the president is okay with it,” a senior White House official who spoke on condition of anonymity told reporters on Air Force One. (Jon Karl, Cecilia Vega, Katherine Faulders, Benjamin Siegel and John Santucci) https://abcn.ws/2E3BnP9

What do we know about the secret GOP memo? The contents of the controversial Republican memo alleging abuses by the Justice Department and FBI have been hotly debated and contested, and soon the American public will likely be able to read them in detail. (Justin Fishel and Benjamin Siegel) https://abcn.ws/2nsrwsI

Ahead of midterms,Trump rallies Republicans, criticizes Democrats. President Donald Trump joined Republican congressional leaders at their retreat in White Sulphur Springs, W.Va., to present a united front for the party as they head into the 2018 midterm election. (Emily Goodin) https://abcn.ws/2GFjggX

Michelle Obama to scared Americans: ‘Forget what they are saying in Washington.’ Michelle Obama made her first television appearance since leaving the White House on the Ellen DeGeneres show, which was filmed earlier this week and aired this afternoon. (Meghan Keneally) https://abcn.ws/2FCE6fs

In a series of three “epic” interviews with Vanity Fair, Anthony Scaramucci details his rise and quick exit from the White House, his experience with Reince Priebus, Steve Bannon, that interview with Ryan Lizza, and why he still thinks Donald Trump is a winner. https://bit.ly/2BOEg0P

The Daily Beast reports that Fox News primetime host Sean Hannity has been talking to President Trump often in recent weeks and urging him to release the GOP memo. https://thebea.st/2nv9whn