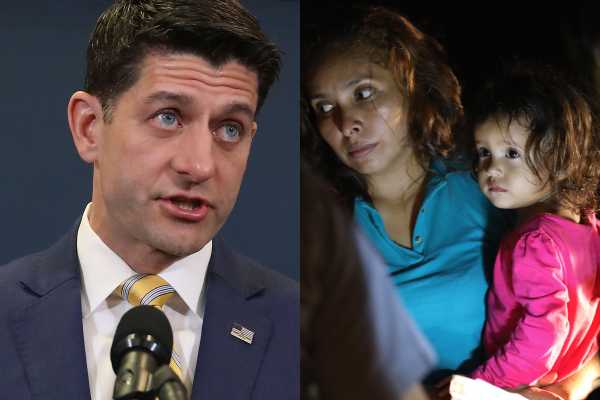 The “compromise” immigration bill released Thursday night by Republicans in the House of Representatives is set to come to the House floor next week, alongside a more conservative alternative. It’s a sweeping plan that covers everything from border security (including a promise of $25 billion for Trump’s border wall); to a way for immigrants who are facing the loss of their protections under the Deferred Action for Childhood Arrivals (DACA) program to apply for legal status and ultimately (possibly) green cards and citizenship; to cuts to legal family-based immigration that are partially offset by expanding permanent employer-based immigration.

But House Speaker Paul Ryan and others are emphasizing a different aspect of the bill. They claim it would prevent the Trump administration from separating children from their parents at the US-Mexico border — a practice the administration made widespread in early May and that has resulted in the separation of hundreds of families a week.

The Republican bill doesn’t outlaw family separation. It doesn’t stop the Trump administration from choosing to prosecute asylum-seekers who enter the US between ports of entry (official border crossings) for illegal entry, which results in parents being sent into criminal custody without their children. And it doesn’t even force the government not to separate parents who do present themselves legally for asylum from their children — something that has also been happening, though isn’t as widespread.

What the House bill does is get rid of the extra legal protections that children and families have in immigration detention: a requirement that children be kept in the “least restrictive” conditions possible, and that they not be detained any longer than necessary. This means that, if the family is kept together, their parents must be released with them. The Trump administration calls those protections “loopholes,” and blames them for “forcing” the administration to keep asylum-seekers in custody by separating families.

If the House bill passed, the Trump administration probably would stop separating families. Instead, it would be able to keep children and parents in ICE detention until their cases were resolved — that is, they could be in held in detention indefinitely.

The Republican summary of the new bill (as reported by Leigh Ann Caldwell of NBC) claims that it ends family separation: “Accompanied alien minors apprehended at the border must not be separated from their parent or legal guardian while in DHS custody.”

There is no language like that in the bill.

What exists, however, in a section called “Clarification of Standards for Family Detention,” is a provision allowing ICE to detain immigrant children who come to the US with their parents or guardians in the same way it would detain adults:

That sentence would overrule a court agreement that’s been in place for the past 20 years, called the Flores agreement, that puts strict limitations on when the government can keep children in immigration detention. The Flores agreement requires that kids be released “without unnecessary delay,” and that they are kept in the meantime in the “least restrictive” conditions possible.

Courts have interpreted that agreement to mean that ICE can’t detain families for more than 20 days in most cases.

The Flores agreement doesn’t require the government to separate families. It just requires the government not to indefinitely detain children. But the Trump administration has decided to maximize the detention of asylum-seekers, including parents, to prevent people from disappearing into the US as unauthorized immigrants after they’re released. (This is the so-called “catch-and-release” policyTrump has railed against.)

Rather than release parents with their children, therefore, the administration is separating families so the parents can be detained while the children (sent to the custody of HHS as “unaccompanied alien children”) are ultimately placed with sponsors.

Nothing in the bill requires ICE to keep parents and children together in detention. In fact, the mechanism that the Trump administration has generally been using to separate families — referring parents into the custody of the Department of Justice for prosecution — isn’t even addressed in the bill.

The only reason the House bill could possibly end the separation of families would be if the Trump administration decided that, because they now didn’t have to release children from detention, they would stop prosecuting parents, and they would make an effort to keep families together in ICE detention.

But even then, that just means that children would be held in facilities that are essentially jails with their parents for months, or even years, until they ultimately received legal status — or, more likely, until they were finally deported.