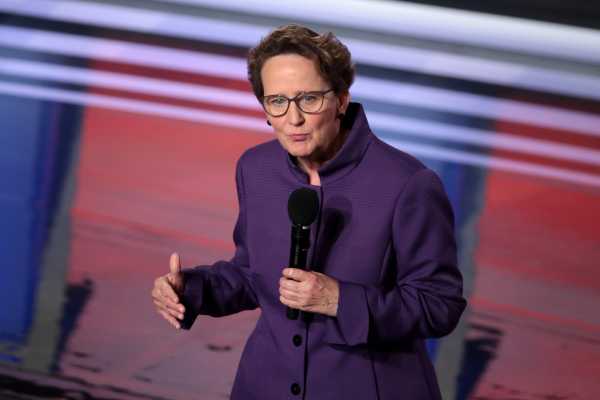 Mary Kay Henry, the head of the 2 million-member Service Employees International Union (SEIU) and one of the most powerful and influential labor leaders in the United States, called on Wednesday for the union movement, and 2020 Democratic presidential contenders, to abandon their reliance on the model of labor organizing that’s persisted in the US for more than 80 years.

She called for a new approach to save unions from extinction: sectoral bargaining.

“Bargaining by industry, where workers from multiple companies sit across a table from the largest employers in their industry to negotiate for wages and benefits, is standard practice in almost every developed country in the world,” Henry declared in a speech in Milwaukee. “It should happen here too.”

Henry specifically called on Democrats running for president in 2020 to think beyond some longtime priorities of the union movement: “Many of the 2020 presidential candidates talk about banning right to work laws, or tweaking the rules to make it a little bit easier for workers to join unions,” she said. “But to truly improve the lives of working people, we need all of them to think even bigger.”

This means asking for more than just card check, a measure that would allow workers to organize a union simply by obtaining cards calling for a union from a majority of workers, without need for an election. That was the major legislative demand of the US union movement during the Obama years, one that Congress never got around to passing (if it even had the votes), and one that Henry now considers insufficient.

“Banning right to work laws” means repealing the major provisions of Taft-Hartley, the 1947 law that allowed states to prohibit unions from charging fees to non-union members who benefit from union-negotiated contracts. Sen. Bernie Sanders (I-VT) and Rep. Bobby Scott (D-VA) have introduced legislation to do just that, often in conjunction with card check.

But Henry is declaring that those two goals, which have occupied considerable union political energy for decades, are not enough. Instead, she’s demanding that 2020 candidates embrace a bigger slate of reforms, including, most strikingly, embracing industry-wide bargaining and amending the National Labor Relations Act to allow states to enact tougher pro-union laws.

So far, Sanders and and fellow presidential candidate Pete Buttigieg have embraced sectoral bargaining. In her speech, the president of America’s second-largest union fundamentally reframed the labor movement’s agenda for the next Democratic president.

The case for sectoral bargaining

Labor unions in America today are in crisis. In the mid-1950s, a third of Americans belonged to a labor union. Now, only 10.5 percent do, including a minuscule 6.4 percent of private sector workers. The decline of union membership explains as much as a third of the increase in inequality in the US, has caused voter turnout among low-income workers to crater, and has weakened labor’s ability to check corporate influence in DC and state capitals.

Most European countries still have far greater levels of union coverage than the US. As of 2013, more than two-thirds of workers in Denmark, Sweden, and Finland were union members. In France and Austria, a minority of workers are in unions, but 98 percent are covered by collective bargaining contracts.

Not coincidentally, none of those countries relies as heavily on workplace-by-workplace organizing as the US does.

The model of unionizing that dominates American labor, familiar from movies like Norma Rae, has been in place since the 1935 National Labor Relations Act. For a union to be formed, at least 30 percent of workers in a workplace petition for a union election. The National Labor Relations Board sets a time and place for the election to be held. If a majority of workers vote to be represented, then they’re all unionized. Sometimes, as happened at Vox Media, companies will voluntarily recognize a union for which a majority of employees have expressed support.

Because unionization happens in individual companies and workplaces, the system is known as “enterprise-level” bargaining. And if you’re covered by an enterprise-level union contract, the system works pretty well. Unionized workers in the US enjoy significantly higher wages and better benefits than nonunion workers, and have greater recourse if they’re being mistreated by their employer.

The problem is that as unions shrink, fewer and fewer people get those benefits — and that’s partly due to the structure of the enterprise-level bargaining system itself. Unions get higher pay for their members by demanding money that would otherwise go to shareholders and executives, and so the latter have every reason to fight union drives.

But according to Princeton economist Henry Farber and Harvard sociologist Bruce Western, an even bigger reason for the decline of unions than corporate resistance to organizing drives is that unionized companies in the US have added fewer jobs over time than their nonunion counterparts.

The slower growth has a few causes: Unions were most successful in now-stagnating or shrinking industries like manufacturing and transportation; investors are less willing to put money into firms where unions capture some of their profits; and unions increase labor costs for employers, who respond by hiring fewer workers. Western and Farber found that unionized firms’ slower growth accounted for most of the decline in union membership between the 1970s and ’90s.

But workers in most European countries, and some other rich countries outside the US, have figured out an ingenious way around this. Unions there bargain not at the company level but at the sector level, negotiating for all workers in an entire industry rather than just one company or workplace.

In Sweden, for example, bargaining takes place at three levels: nationally for all industries, between the national union confederations and an association representing all employers; nationally, for specific industries, between the relevant unions and employers; and locally among individual companies. For the vast majority of workers, wages are set at a combination of the three levels, with only very few having deals set primarily at the company level.

What sectoral bargaining would look like in the US

As Henry noted in her speech, we have a model for sectoral bargaining in the US, one pioneered by SEIU itself: the Fight for 15.

Organizers in New York achieved a $15 minimum wage for fast-food workers by convening a wage board. Wage boards have the authority to mandate pay scales and benefits for whole industries, after consultation with businesses and unions. That’s an awful lot like how European countries implement sectoral bargaining.

In an influential article in the Yale Law Journal, Kate Andrias, a law professor at the University of Michigan and an Obama administration veteran, argued that the “Fight for $15” campaign is, effectively, a sectoral bargaining effort meant to raise standards for a whole segment of low-wage workers regardless of their specific employer.

In three states — New Jersey, Colorado, and California — wage boards could be called again, right now, by the executive branch. But labor researchers like the Center for American Progress’s David Madland have also been developing nationwide proposals for wage boards.

States would also be allowed to maintain their own boards, provided the standards they set are higher than federal standards. This is similar to how the federal and state minimum wages work currently.

Henry mirrored this impulse in her call for federal labor law reform to allow states to go beyond what is allowed in the NLRA, which currently preempts a lot of state labor law. She argues that the NLRA should be reframed as a “floor” that state laws have to live up to, not a ceiling beyond which they cannot pass any more pro-union legislation.

Like any left-leaning proposals floated during the 2020 primaries, these ideas will face a hard road in Congress should a Democrat win the presidency. Especially if the Senate filibuster remains, these are ambitious enough ideas, and huge enough shifts from the current model of wage-setting in the US, that expecting passage is probably optimistic.

But Henry’s speech was important all the same. It suggests that politically connected labor leaders are totally rethinking what they want out of labor law reform. They don’t just want to make it easier to organize specific workplaces. They want to get out of the business of organizing workplace by workplace altogether.

Wisconsin is voting, despite coronavirus. Here’s when results might come in.

Consumers were slammed in the Great Recession. The CFPB’s former director warns worse could be on the way.