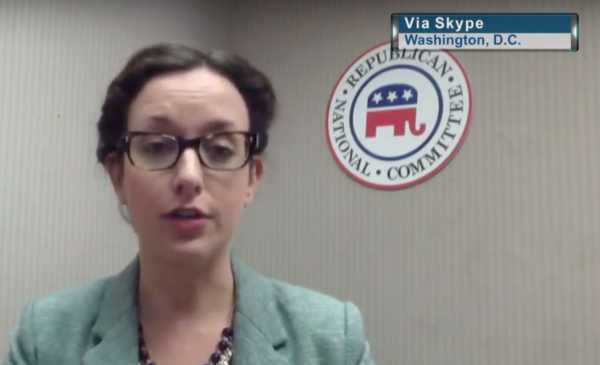 Top editors at CNN say they are “thrilled” that Sarah Isgur, a former Trump administration spokesperson and longtime Republican operative with no journalism experience, will join their staff ahead of the 2020 presidential campaign season as a political editor, despite a ferocious public backlash to the announcement on Tuesday.

Hours after news of Isgur’s hiring broke, CNN sent Vox an email trying to downplay the extent to which she’ll shape the network’s political coverage.

Isgur — who once referred to CNN as the “Clinton News Network” on Twitter — will help to “coordinate coverage across TV and Digital,” a spokesperson wrote. She will be “making sure that stories are featured on the right shows and articles get posted online at the right time,” but will merely be one of many editors doing that.

The Daily Beast reported that on Wednesday, CNN brass wrote to politics reporters saying that Isgur “brings a wealth of government, political, communications, and legal experience to our team.”

But as CNN’s note to staff tacitly acknowledges, the fact remains that Isgur has zero experience in journalism. Her résumé would normally make it very difficult for her to land a newsroom position at CNN or any major media outlet.

She’s worked for a variety of right-wing organizations and campaigns, including Carly Fiorina’s and Mitt Romney’s presidential bids, the Republican National Committee, and a Ted Cruz US Senate campaign. Most recently, she worked as a Department of Justice spokesperson for former Attorney General Jeff Sessions, a job which reportedly required her to take a loyalty oath to the president she will soon be tasked with covering.

Isgur’s partisan Twitter feed alone would normally be a problem working for a network. In her tweets, she repeated conservative talking points and false claims (including that Donald Trump didn’t question Barack Obama’s place of birth) and conspiracy theories (about Planned Parenthood and the Clintons, in particular).

Critics emerged on Twitter soon after CNN’s announcement Tuesday, including media academics, left-leaning writers, and average users, who all questioned whether Isgur could do the job fairly.

Behind the scenes, CNN reporters were also livid. In his Tuesday night newsletter, CNN’s Brian Stelter reported that one unnamed editor told him “we hired a former Trump administration official to help ‘guide’ our coverage of his re-election. Reporters are up in arms about this.” An unnamed reporter told Stelter that “this just feels like a disaster.”

“I’m really, really worried about this, and concerned about the ethical implications of taking direction on stories from someone I covered when she was an operative in 2016 and who pledged loyalty to one of the candidates in the 2020 race,” the reporter added, according to Stelter. “This seems different and much more problematic to me than your typical political-media revolving door hire.”

Since the 2016 election, CNN has emerged as one of Trump’s favorite targets of abuse. Some see the move to hire a conservative in a prominent news role as a way to blunt criticism from the right that the network is reflexively anti-Trump.

But it’s also undeniable that in some ways, Trump is beneficial for CNN. My colleague Matthew Yglesias wrote recently about the volleying between CNN and Trump over White House reporter Jim Acosta. It’s true that that flap is, in part, about First Amendment rights, and Trump’s disrespect for them. But more practically, the episode is a reminder that the tension benefits both parties.

During an interview with Vanity Fair late last year, CNN president Jeff Zucker characterized the last three years — a period of time commensurate with Trump’s political rise — as “among the most successful in CNN history.”

“People say all the time, ‘Oh, I don’t want to talk about Trump. I’ve had too much Trump,’” Zucker said. “And yet at the end of the day, all they want to do is talk about Trump. … We’ve seen that, anytime you break away from the Trump story and cover other events in this era, the audience goes away. So we know that, right now, Donald Trump dominates.”

Before he decided to run for president, Trump indicated that he was a big fan of Zucker, with whom he worked at NBC during The Apprentice days.

The big question is whether CNN’s 2020 coverage will be a redux of 2016, when the network found that airing footage of Trump’s rallies uninterrupted and repeating his false claims uncritically drew huge ratings. CNN hired pro-Trump talking heads who regularly misinformed their audience.

On the other hand, CNN covered little of Hillary Clinton’s policy proposals, instead focusing on her emails. To cite one metric, a Harvard study found that the email scandal “accounted for a full sixth of Clinton’s coverage on CNN’s The Situation Room.”

Zucker has repeatedly apologized for the amount of coverage his network devoted to Trump’s rallies in 2016. But the fact is that Trump is good for business. Bringing on on pro-Trump Republican raises fair questions about what if anything network higher-ups learned from the last time around.

“A kind of false fairness”

In addition to the backlash from staffers, news of Isgur’s hire was criticized by prominent media watchdogs and journalism academics.

In a column headlined “CNN’s hiring of a GOP operative as political editor is even worse than it looks,” Washington Post media columnist Margaret Sullivan described Isgur’s hire as reflecting CNN’s desire for “a kind of false fairness”:

After all, if CNN’s top concern was about ensuring the quality of the network’s political coverage during the 2020 cycle, they’d hire actual journalists as editors. Instead, network brass is prioritizing the optics of pandering to “both sides.”

A Columbia University journalism professor Sullivan spoke with, Bill Grueskin, said Isgur’s lack of journalism experience left him wondering “if Jeff Zucker would ever have brain surgery performed by a dentist.” Another respected journalism professor, Jay Rosen of New York University, responded to Isgur’s hiring by saying to the Daily Beast: “There weren’t any journalists available?”

But while Isgur’s hiring was widely pilloried, CNN brass stood strong behind the move.

“The more viewpoints represented in newsrooms, the better”

As the network came under fire for hiring Isgur, CNN’s Stelter straddled a fine line between reporting on the news and defending his employer.

On Tuesday evening, Stelter, alluding to Isgur, tweeted, “The more viewpoints represented in newsrooms, the better.”

Stelter’s assertion, however, is false. Misinformation is not entitled to a platform, and Isgur’s background raises questions about whether she’s capable of fairly covering Democratic candidates, not to mention her boss’s former boss.

Later Tuesday, Stelter’s media newsletter contained a section called “Here’s the argument in favor of Isgur’s hiring” that conveyed the case made to Stelter by unnamed CNN executives. Here’s what Stelter wrote:

But being an “exceptional person” is not generally a qualification to be a news editor. Second, as Stelter points out, there are important differences between the Stephanopoulos and Isgur situations. Stephanopoulos, who worked as White House communications director before joining ABC, was never reported to have pledged loyalty to Bill Clinton, for instance. Stephanopoulos also started at ABC as a commentator, not a news editor.

While all of the quotes in Stelter’s newsletter was anonymous, the Daily Beast reported that the note CNN brass sent to staff on Wednesday endorsing Isgur’s hire was signed by Washington bureau chief Sam Feist, newsgathering vice president Virginia Moseley, and political director David Chalian.

All three of them joined CNN ahead of the 2016 election cycle. Did they learn from the mistakes that were made then? While it’s too soon to answer that question definitively, the early returns aren’t promising.