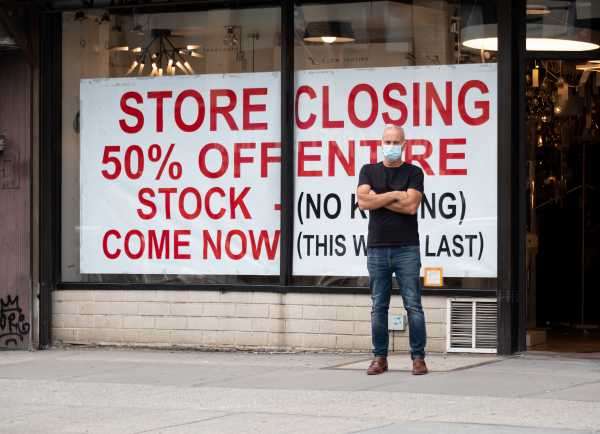 Roughly six months after the coronavirus began to wreak havoc on the US economy, about half of those who lost their job say they are still without one.

That’s one of the most notable findings of a new Pew Research Center survey, which paints a picture of a nation still reeling economically even as it recovers from the labor market free fall earlier this year that intensified as Covid-19 cases increased, and state lockdowns froze businesses across the country.

The study, which surveyed 13,200 US adults in the first two weeks of August, found some limited recovery with respect to employment: Of all those who said they had lost a job, a third have returned to their old job, and 15 percent say they have a new job.

But that limited recovery has not been one shared equally by workers at different income levels. According to Pew, while 58 percent of upper- and middle-income adults who lost a job due to the coronavirus have returned to their old job or gotten a new one, only 43 percent of lower-income adults have been able to do the same.

The study’s findings also include a number of other indicators of ongoing economic hardship.

“One-in-four adults have had trouble paying their bills since the coronavirus outbreak started, a third have dipped into savings or retirement accounts to make ends meet, and about one-in-six have borrowed money from friends or family or gotten food from a food bank,” the report reads.

Pew’s findings track roughly with government data and other economic analyses of the labor market. Less than half of the 22 million jobs lost during the early stages of the pandemic have been recovered, according to the New York Times.

And overall, the department’s findings suggested reason for concern. The jobs report signaled a slowdown from earlier in the summer: the economy added 4.8 million jobs in June, and 1.7 million in July.

With job growth slowing down and economic assistance from Congress stalled, economists and forecasters have cast doubt on the prospects of a rapid, or V-shaped, economic recovery.

“I continue to view the glass as half-empty. We’re still a long ways from where we were pre-Covid,” Gregory Daco, chief US economist at Oxford Economics, told MarketWatch recently.

Pew’s findings — as well as the Labor Department’s report — show Americans are in great need of aid. However, attempts to unveil a new federal economic stimulus package have repeatedly failed, even as programs created earlier in the year — like an extra $600 per week in federal funds for the unemployed — have ended.

On Thursday, however, Treasury Secretary Steven Mnuchin said he and House Speaker Nancy Pelosi have agreed to restart negotiations over another coronavirus relief bill after talks collapsed in August.

The two parties have struggled to find a compromise on the size and scope of relief legislation, with Republicans preferring to offer a far smaller amount of aid than Democrats.

The Democratic-controlled House of Representatives passed the $3 trillion HEROES Act in May, but Republicans struggled for months to answer it with legislation of their own. In September, Senate Republicans announced their plan, a much narrower relief package that would provide $650 billion in new funding. Democrats argued the bill did not provide enough aid, and the legislation failed to pass the Senate.

How much aid is necessary has been a sticking point for negotiations between the parties, with Democrats standing firm on the need for trillions of dollars in stimulus. However, Pelosi has now reportedly directed Democratic committee chairs in the House to design a more modest coronavirus relief package to bring to the next set of negotiations with the White House.

Moderate Democrats who face tough reelection odds have reportedly been applying pressure to Pelosi to put out a new bill they can vote on before the House’s next recess, currently set to begin on October 5.

Outside of Congress, the timeline is even more urgent. With September ending, rent and other bills are coming due. But millions of Americans who could benefit from more robust unemployment aid, stimulus checks, more state-run services, and aid for their businesses, continue to wait for help.