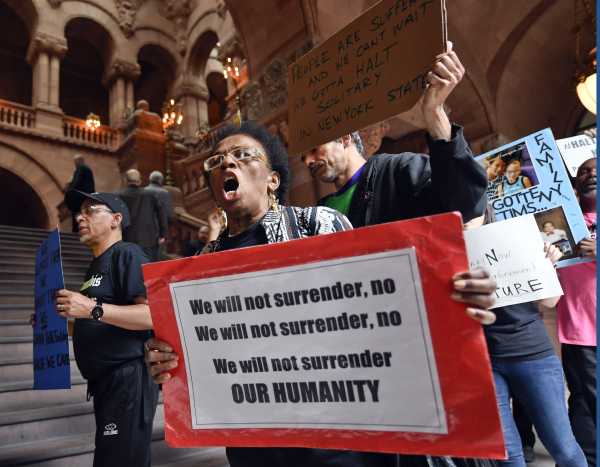 New Jersey lawmakers have passed a bill that is among the most progressive legislative reform to the practice of solitary confinement in the US.

The bill would drastically restrict solitary confinement to a maximum of 20 consecutive days or 30 days total over the course of 60 days — a huge reduction of the indefinite sentences prisoners were given in the past. Democratic Gov. Phil Murphy has 45 days to sign the bill, which was passed by lawmakers on June 20.

The bill also restricts the isolation of “vulnerable populations,” including: young adults under 21, seniors over 65, mentally or physically disabled individuals, seriously ill prisoners, pregnant women, and members of the LGBTQ community. And because the bill seeks to increase oversight, the Department of Corrections is obligated to provide thorough documentation and data of their use of solitary confinement.

This isn’t the first time New Jersey has pushed for a restriction on solitary confinement: a similar measure was introduced and passed by lawmakers in 2016. It, however, was vetoed by Republican former Gov. Chris Christie, who belittled the bill’s sponsors in a scorching letter sent to the state’s Senate.

“This is not a bill,” he wrote. “It is an ill-informed, politically motivated press release by a prime sponsor [Sen. Ray Lesniak] who proves once again, that he has no idea about law enforcement or what is being done by the very department he proposes to further regulate.”

He went on to state that New Jersey does not practice solitary confinement and only keeps inmates in “specialized, segregated housing units” for medical or safety reasons. However, reports from Students for Prison Education and Reform, a Princeton University student group, show that these units, which closely resemble solitary confinement, were primarily used a disciplinary measure — contrary to what Christie had claimed. They also revealed that in December 2015, 92 percent of the 1,015 prisoners who were isolated were kept in these segregated units for 30 days or longer.

This is why legislators reintroduced the same bill after Murphy, a Democrat who heavily campaigned on criminal justice reform, took office in 2018. Even with a progressive governor and a Democratic majority in both the Senate and General Assembly, passing the bill over the objections of the Department of Corrections hasn’t been an easy fight. Lawmakers and activists have had to compromise: Initially, the bill had called for restricting solitary confinement to a maximum of only 15 days — a limit chosen because anything beyond that could cause irreversible psychological damage, according to former United Nations Special Rapporteur on Torture Juan Méndez.

“Many [incarcerated people], they don’t believe in any of this. They don’t think nothing’s going to change,” he said. “So we’ll give hope to people that don’t have hope.”

The psychological damage of solitary confinement is already well documented

While it may seem obvious that loneliness often leads to depression and mood disorders, chronic social isolation actually changes the brain. The hippocampus, which controls learning, memory and spatial awareness, decreases in size, according to neuroscientist Elena Blanco-Suarez. Meanwhile, the amygdala — the mediator of emotions including fear and anxiety — shows more activity. An extended period of social isolation can eventually lead to a decrease in neurons.

Such an extended period of isolation can ultimately push prisoners to make extreme choices. As Stephanie Wykstra wrote for Vox:

The memory of solitary confinement still lives on with Lydia Thornton, a former felon in New Jersey who spent nine and a half months in isolation. She said the hardest part of solitary confinement was the helplessness. This was especially evident when she was confined in her cell while inmates in a nearby cell would threaten to self-harm — something that happened more often than one would think, she said.

“You scream for a guard,” she said. “You try to convince them to come check. You do everything you can do. And then you pray. Whatever higher power God or deity you believe in, you pray. Because there is absolutely nothing else you can do.”

Thornton, who is now a criminal justice activist, said solitary confinement has changed her: Large crowds are uncomfortable and the sounds of honking cars make her jump. She deems herself luckier than others though: Some can barely talk about their time in solitary confinement.

“Part of that is fear of reliving it, fear of realizing that you haven’t healed at all,” she said. “You’re just surviving.”

New Jersey isn’t the only state that has been working toward restricting solitary confinement, although it is the most successful case in the current legislative sessions.

Democratic Minnesota Gov. Tim Walz signed a bill on June 14 that mandated a psychological screening before admitting prisoners into solitary confinement and a daily wellness checks during their isolation. The law also mandates that prisoners not be released back into society directly from solitary confinement — which in the past has proven to make their transition more difficult. While there is not a restriction on the length of solitary confinement, the commissioner of corrections must review any case in which the segregation is longer than four months and be notified after a prisoner’s isolation has surpassed 30 days.

This was a significant move for Minnesota; before the passage of this bill, it was one of the few states that had no laws addressing solitary confinement. A 2016 Star Tribune investigation revealed that more than 1,600 prisoners in the state were held in solitary confinement for at least six months over the span of 10 years — often for trivial reasons. 437 of them had been segregated for a year or even longer.

New York attempted to pass its own reform bill in June. The state’s HALT bill in June, would have banned solitary confinement for 15 consecutive days or a total of 20 days in a 60-day period. Activists pressured lawmakers to pass the bill by staging a hunger strike from June 12 to June 19. Ultimately, Democratic Gov. Andrew Cuomo and legislative leaders announced June 21 that they had reached an agreement to drop the bill.

Rather than legislatively restrict solitary confinement, they’ve agreed to implement administrative changes for now. According to AM New York, some of the bill’s reforms will still be implemented, such as a 30-day cap on solitary confinement and specialized transition units for those being released from isolation. Prisons will also no longer be allowed to put minors, pregnant people, and prisoners with disabilities in solitary confinement.

Gov. Cuomo said the main obstacle to passing the bill was that the state did not have the funds to install the alternative rehabilitation units the legislation specified had to be installed in local jails. The governor said he could not support an unfunded mandate.

The Correction Officers’ Benevolent Association, a union representing New York correction officers, had also issued a statement saying that the restriction of solitary confinement would increase conflicts against correction officers and between inmates. Officials in Colorado, however, might call these concerns misguided. The state’s solitary confinement reforms were led by the state’s very own Department of Corrections.

“There now is enough data to convince me that long-term isolation manufactures and aggravates mental illness,” Colorado Department of Corrections executive director Rick Raemisch wrote in an op-ed for the New York Times. “It has not solved any problems; at best it has maintained them.”