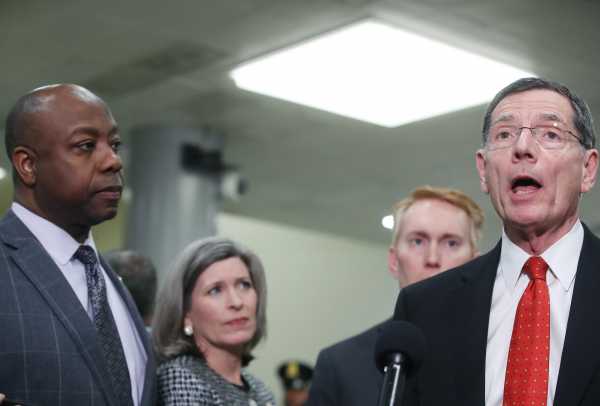 During his closing arguments at the Senate impeachment trial on Friday, impeachment manager Rep. Adam Schiff made a comment that set some Republicans off.

“CBS News reported last night that a Trump confidant said that key senators were warned, ‘Vote against the president and your head will be on a pike,’” he said. “I don’t know if that’s true.”

He added, “I hope it’s not true,” before arguing that it was the sort of statement a president who believes himself to be a king would make.

The outrage was swift, even inside the chamber, where the tone of the proceedings reportedly changed.

Sen. Susan Collins shook her head, according to Politico, and loudly said, “Not true.” Others appeared similarly dismayed.

After lawmakers left the trial, several continued to voice their concerns. “I thought he was doing fine with moral courage until he got to the head on a pike. That’s where he lost me,” said Sen. Lisa Murkowski. “Nothing like going through three days of frustration and then cap it off with an insult,” said Sen. James Lankford. “He has basically offended every Republican senator in there tonight,” added Sen. John Barrasso.

Though Republicans didn’t indicate how Schiff’s remarks would affect a potential vote on witnesses next week, they did latch on to them as a new means of criticizing the Democrats’ otherwise painstakingly thorough case for Trump’s removal. And in doing so, they obscured much of the context around the comments.

For one, Schiff was citing a news report, not making the assertion himself. Additionally, though the specific quote spurred strong reactions, the point it tried to make is one that’s an apparent political reality: If lawmakers break with Trump on impeachment, they will likely face backlash, whether from the administration or the Republican base.

The pushback on Schiff echoed some of the attacks Republicans had levied against Rep. Jerry Nadler earlier in the week for violating Senate decorum: It felt like Republicans were simply looking for a reason to discredit the Democratic arguments that had very little to do with their actual substance.

Republicans are under significant pressure to stick with the president

House Democrats’ reference to the CBS News report were in line with points the impeachment managers made on Friday about the need for Congress to check the president so that he doesn’t act like a “king” or “dictator.”

“I was struck by the irony of the idea, when we’re talking about a president who would make himself a monarch, that whoever that was would use the terminology of a penalty that was imposed by a monarch, a head on a pike,” Schiff said.

When lawmakers have opposed him in the past, Trump has, in fact, not taken kindly to it. Most recently, Rep. Matt Gaetz, a staunch Trump ally, voted in favor of checking presidential war powers when it comes to military action in Iran, a position that went against that of the White House. An unnamed senior White House official said the White House would not be returning Gaetz’s phone calls, text messages, “smoke signals or his kneelings in the snow,” the Washington Post reported after the vote.

Former South Carolina Rep. Mark Sanford also garnered severe blowback for his critiques of the president, who ultimately endorsed his primary challenger in 2018.

Trump’s tendency to quash such opposition is well-known in Washington, Sen. Dick Durbin emphasized to reporters. “Well, that’s one of the worst-kept secrets in Washington, is what this White House and this president will do to someone who crosses him, and he’s made that clear from day one.”

Members of the Republican base, with whom Trump has an 88 percent approval rating, according to Gallup, have often rejected breaks with the president as well.

North Carolina Sen. Thom Tillis, a vulnerable Republican who initially refused to support Trump’s declaration of a national emergency to help fund the border wall, is another lawmaker who experienced the consequences of going against the president. Though Tillis ultimately reversed his position, he dealt with the threat of a potential primary challenger after announcing his opposition.

Sen. Rand Paul has said that any Republican who does not vote in favor of calling Hunter Biden as a witness, if that question emerges, would be in electoral danger. “If you vote against Hunter Biden, you’re voting to lose your election, basically. Seriously. That’s what it is,” he previously told Politico.

So while Schiff’s specific reference to the CBS report might be in dispute, even Republicans would seem to agree with the premise of its central metaphor — which makes the outrage over his decision to include it in his arguments seem less about the report’s veracity and more about finding something to distract voters from the charges Trump faces.

Biden is now the presumptive Democratic nominee. Here’s how he stacks up against Trump in the polls.

When will the economy be good again?