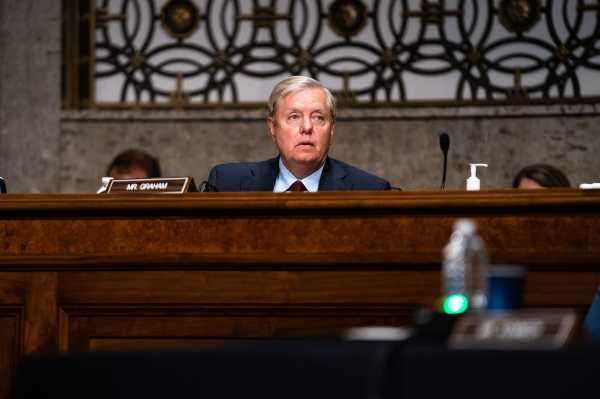 Senate Judiciary Committee Chair Lindsey Graham laid out a swift timeline on Sunday for confirming President Donald Trump’s Supreme Court nominee, Judge Amy Coney Barrett, telling Fox News his committee will approve Barrett by October 22. That could tee up her nomination for a full Senate vote before the end of the month.

Graham’s schedule is putting the Senate on track for what could be one of the fastest Supreme Court justice confirmations in modern American history, and there’s not much that Democrats can do about it.

“We’ll report her nomination out of the committee on October 22,” Graham said. “Then it will be up to [Senate Majority Leader Mitch] McConnell as to what to do with the nomination.”

If Graham is able to stay on that schedule, McConnell will have the option to hold Barrett’s confirmation vote before Election Day — or during the lame-duck session after the elections.

As Vox’s Andrew Prokop has explained, this would be an expedited process, but it would be fully within the rules:

The speed of the process Graham outlined has rankled Democrats and defenders of deliberative propriety in the Senate because it implies the outcome of the committee process is preordained — and has led to Democratic concern that Barrett will not be vetted properly in the rush to confirm her.

The proximity of the vote to Election Day is also unusual. No Supreme Court nominee has been confirmed after July during a presidential election year before. Democratic lawmakers have criticized McConnell for choosing to hold a confirmation so close to an election, particularly after he blocked former President Barack Obama’s Supreme Court nominee in March 2016, arguing that a president should not nominate a new justice within several hundred days of a presidential election.

Senate Minority Whip Dick Durbin (D-IL) said Sunday on ABC’s This Week that Democrats have some procedural weapons with which they can slow down the process, but that their arsenal isn’t powerful enough to derail the nomination process altogether.

“We can slow it down perhaps a matter of hours, maybe days at the most, but we can’t stop the outcome,” the senator said.

Durbin added he did not see the procedural protest ideas presented by a former Senate aide in the New York Times as strong enough to significantly postpone the nomination date.

One of the ideas presented in the op-ed is that Democrats could boycott hearings. But as Prokop has pointed out, “Democrats have tried similar tactics with Graham’s committee in the past, and he has simply ignored the rules when they are inconvenient.”

It’s unclear whether McConnell will pursue a full confirmation vote before Election Day, or after it, during the lame-duck session.

Some pundits have argued that holding the vote before Election Day could energize Democratic voters. Graham noted during his Fox interview that Ginsburg’s death has resulted in a fundraising bonanza for Democrats — including his rival in South Carolina, Jaime Harrison. The windfall has been so great that Graham even twice asked viewers to donate money to his reelection campaign.

“Their base is going nuts, they’ve raised $300 million, ActBlue has, since the passing of Justice Ginsburg,” he said. “I’m being outraised two to one. Every Republican running in the Senate is being hit hard with all of this money.”

The fear for Republicans is that an enraged Democratic base could deliver key races — including South Carolina’s Senate race — for Democrats come Election Day.

But there are downsides to waiting until after Election Day as well. If Democrats win back control of the Senate, then Republicans confirming a Supreme Court nominee during a lame-duck session would be perceived as flagrantly dismissing of the will of the electorate. That could increase the likelihood of aggressive reprisals by Democratic lawmakers, in the form of moves like abolishing the filibuster or expanding the Supreme Court. (Of course, a Democratic-controlled Senate could pursue those policies regardless of whether McConnell moves before or after Election Day.)

Ultimately for the GOP, the upshot of Graham’s schedule — and top Democrats’ signals that they don’t think they can stop the confirmation — is that the Republicans have many options as they contemplate how to best complete a move that could reshape the Supreme Court for a generation.