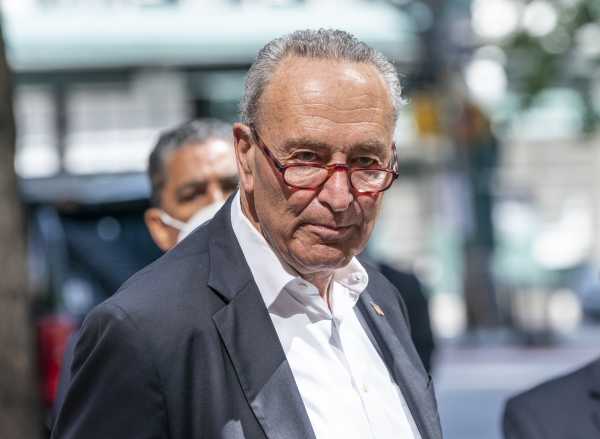 In the wake of Supreme Court Justice Ruth Bader Ginsburg’s death on Friday, President Donald Trump and Senate Majority Leader Mitch McConnell have announced their intention to fill her seat on the Court as swiftly as possible.

Democrats have not yet settled on one particular strategy to counter the Republican agenda, but they’re signaling that they’re not ruling out aggressive responses like rebalancing the Court through court-packing or seeking unconventional ways to delay the nomination.

Senate Minority Leader Chuck Schumer said during a Democratic caucus call on Saturday that “everything Americans value is at stake” and that he is willing to consider all options should Republicans begin the process of filling Ginsburg’s seat this week, as is planned.

Democrats are furious that McConnell plans to proceed with the nomination process despite having led the Republican effort to block President Barack Obama’s Supreme Court nominee to replace Justice Antonin Scalia, who died in February 2016. At that time, McConnell said the “vacancy should not be filled until we have a new president” given that it was an election year.

“Mitch McConnell set the precedent. No Supreme Court vacancies filled in an election year,” Sen. Ed Markey (D-MA) tweeted Friday. “If he violates it, when Democrats control the Senate in the next Congress, we must abolish the filibuster and expand the Supreme Court.”

Enacting either of those policies would transform American political life. Ending the filibuster would allow legislation to pass the Senate with a simple majority of more than 50 votes. If Democrats won control of the Senate in November and scrapped the filibuster, they’d be able to pass ambitious legislation with far greater ease than they could during the Obama administration.

And court-packing is a bold strategy that Democrats could use to gain ideological influence over the Court if they win back the Senate in the 2020 elections.

“If Democrats control the White House and the Congress, in other words, they can pass a law adding seats to the Supreme Court. If Biden is president, he could then quickly fill them (with the consent of the Senate),” Vox’s Ian Millhiser recently wrote. “And four new seats could give Court a Democratic-controlled majority, despite another Trump pick.”

The most radical Democratic plan to fix the Supreme Court yet

Leaders of the anti-Trump group Indivisible, the abortion rights organization NARAL, and the court advocacy nonprofit Demand Justice reportedly discussed the maneuver on a call on Friday.

So far, it’s unclear which, if any, of the potentially sweeping policies like packing the Court or ending the filibuster are being taken seriously by Democratic leadership or could emerge as tangible threats against the GOP. Sunday on NBC’s Meet the Press, Sen. Amy Klobuchar (D-MN) was asked to explain what Schumer meant by “nothing off the table“ and declined to offer specifics.

“I think he’s talking about the fact that there’s reforms that we’ve all looked at that you could consider … but, again, I’m not going to concede this,” she said.

She continued by arguing that Republicans need to be consistent in their statements, pointing out that a number of Republicans previously publicly said they would follow 2016’s precedent if faced with a Supreme Court vacancy ahead of November’s election. Some of these Republicans, such as Sen. Lindsey Graham (SC), have since said they’ve changed their minds; others, like Sens. Susan Collins (ME) and Lisa Murkowski (AK), have argued following Ginsburg’s death for waiting until after the election to seat a new justice.

Nancy Pelosi signals potential receptivity to a number of options

During an appearance on ABC’s This Week on Sunday, House Speaker Nancy Pelosi also signaled an openness to aggressive strategies.

ABC’s George Stephanopoulos asked Pelosi about the idea floated by some activists that Democrats could use impeachment hearings against Trump or Attorney General Bill Barr to tie up the Senate if Republicans try to push through a nomination during a lame-duck session (after a potential win for Democrats in Congress and the White House).

“Well, we have our options,” Pelosi replied. “We have arrows in our quiver that I’m not about to discuss right now, but the fact is we have a big challenge in our country. This president has threatened to not even accept the results of the election with statements that he and his henchmen have made.”

Stephanopoulos pressed Pelosi further on the issue, and tried to get her to confirm that she wasn’t “ruling anything out” as an option, and she again said her party feels it has a number of options at its disposal.

During the interview, Pelosi did rule out using a looming government shutdown as leverage over Republicans but refuses to issue a statement on adding justices to the Supreme Court.

What is clear is that Democrats do not yet have the votes to block a Trump nominee in the Senate. They will need four Republican senators to either abstain or vote no on that nominee; as of Sunday, only two — Collins and Murkowski — have said they believe the Senate shouldn’t vote on the president’s nominee before November’s election. Trump is expected to announce his nominee this week, meaning Democrats will need to unveil a firm strategy soon.