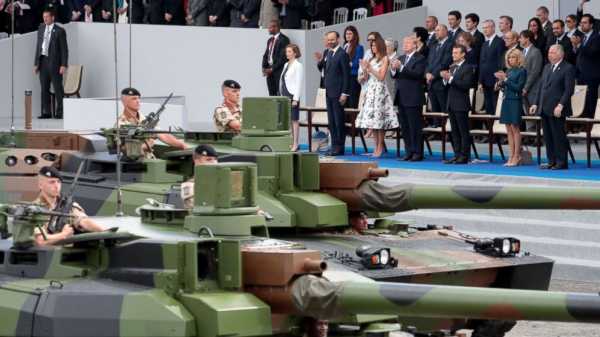 “I have no desire to go to a Soviet hardware display. To me that’s cheesy and weak, ” Graham said. “What would be appropriate is to have the men and women on display for the nation to say thank you and their families and to have a parade of honor and of thank you.”

The Pentagon confirmed Tuesday that Trump had told military officials to plan a large-scale military parade similar to the one he witnessed in France on Bastille Day. Trump visibly enjoyed himself watching as armored vehicles rolled and soldiers marched down the Avenue des Champs-Elysees and past a reviewing stand where they saluted him and French President Emmanuel Macron.

Sen. John Kennedy, a Louisiana Republican, said the world already knows that the U.S. has the strongest military in the world, and that there’s no need to broadcast it.

“I don’t think it’s a particularly good idea,” he said of the parade. “Confidence is silent. Insecurities are loud.”

Sen. James Lankford, an Oklahoma Republican, said he was not outright opposed to the idea but said the government should always be mindful of spending.

“I think we should continue to celebrate our military at every opportunity we have. There’s no issue with that,” he said, but added, “We should always be careful always on cost. Because the primary function of the military is not to be able to show them, it’s really to be able to be in the service.”

Libertarian-minded Rep. Justin Amash, R-Mich., said he would support a display of military might if it were to commemorate the withdrawal of American troops from conflicts around the world.

On Wednesday, Defense Secretary James Mattis said the parade request was a reflection of Trump’s love of the military.

“I think we’re all aware in this country of the president’s affection and respect for the military. We’ve been putting together some options. We’ll send them up to the White House for a decision,” Mattis said.

A few Senate Republicans suggested Trump should time his parade to the celebrations which already occur on Veterans Day, officially observed on November 11. The Pentagon said Tuesday it was looking at possible dates.

“I think that’s probably good for the country, always, if we praise our soldiers, whether it’s in Washington, D.C. or Birmingham, Alabama or New York City; we’ve had that in the past. Good timing would be Veterans Day,” said Sen. Richard Shelby, R-Ala.

Sen. Ben Cardin, a Maryland Democrat and the ranking member on the Senate Foreign Relations Committee, said that nations with smaller militaries feel the need to show off what they do have.

“We understand when there are countries that are not major military powers that like to display their military. I just don’t think it’s necessary in the United States and it’s a wrong use of our resources.”

He added that the government can better celebrate its military through its actions than through costly shows of strength. Just Wednesday the Senate approved a deal to lift caps on military spending as part of a longer-term budget deal.

“We do it by our actions. I don’t think we need to do it by a parade,” Cardin said of showing appreciation to troops.