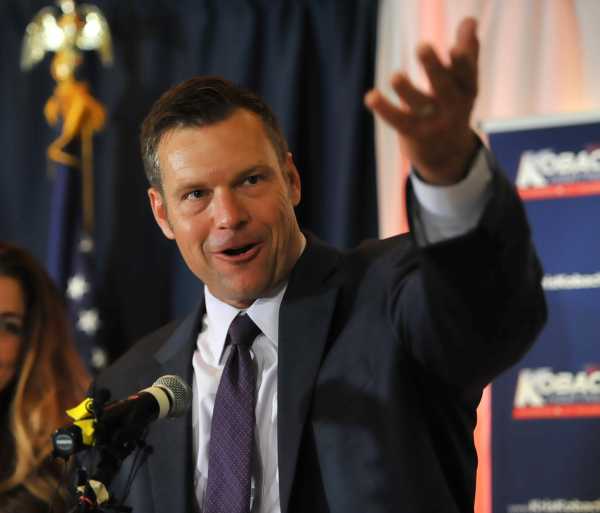 Kris Kobach, who is currently holding on to a lead of fewer than 200 votes in Kansas’s Republican primary for governor, is one of America’s most effective advocates of racist policy. And that was clear even before he hired open white nationalists as part of his gubernatorial campaign.

In 2002, he helped the Bush Justice Department set up a registry for immigrants from 25 countries, 24 of which were majority-Muslim. Later, as a private attorney, Kobach crisscrossed the nation like the Monorail guy on The Simpsons, encouraging towns to adopt flagrantly unconstitutional laws targeting immigrants (earning millions in legal fees in the process). He helped craft Arizona’s SB 1070, a bill that was essentially an open invitation for racial profiling by instructing police to stop anyone they have a “reasonable suspicion” is an illegal immigrant.

As Kansas’s secretary of state, Kobach pushed through a voter ID law that lowered turnout by 122,000 votes, and adopted the Interstate Crosscheck System to purge voter rolls, moves that disproportionately affected nonwhite voters.

I don’t know what’s in Kobach’s soul. But I do know that one of the few constants in his career is an enthusiasm for policies that hurt racial minorities.

We have an unfortunate tendency in America to treat racism and racial resentment as a pathology of the white underclass. Takes about the need for Democrats to abandon woke “identity politics” typically cite a desire to win back the “white working class,” not white members of the Harvard Club.

But while there’s some survey data backing the idea that working-class whites are likelier to harbor racial resentment (see table 3 here), the racism that kept Jews and black people out of country clubs (and out of Harvard) for generations is still around. And Kobach is a great example of how it can continue to have real political consequences.

The incredible effectiveness of racist elites

Institutions like Harvard occupy a weird place in our public culture, derided on both left and right for their complicity in various social ills (and of course no one loves to bash Harvard more than people who went there), but nonetheless associated with a kind of cosmopolitan sophistication. They may propagate, say, laissez-faire economic ideas, or reinforce class privilege, but surely they’re the enemy of base forms of ethnonationalism.

Kobach, however, is a friend to white ethnonationalism. And Harvard not only didn’t stop him but helped give him the social prestige and power to carry out his mission.

Indeed, if anything Harvard seems to have helped Kobach find and develop his brand of racism. Kobach’s main mentor at Harvard was Samuel Huntington. Huntington is a complicated figure, a pioneer in political science whose The Soldier and the State (1957), Political Order in Changing Societies (1968), and The Third Wave (1991) are justifiably considered classics.

But by the 1980s and ’90s, when Kobach was under his tutelage, Huntington was becoming more and more skeptical of democratic procedures, with a special skepticism reserved for equal suffrage in racially divided societies. In 1981, he gave a speech in South Africa in which he warned that the apartheid government should absolutely not give black people full suffrage, arguing instead for a “consociational” arrangement that purports to give white, black, mixed-race, and Indian South Africans autonomy over their own affairs, while preserving racial separation. Repression of revolutionary groups like the African National Congress should continue, he advised.

Two decades later, he authored Who Are We?, a book arguing that America’s Protestant culture was being eroded by Latino immigrants; the white nationalist Richard Spencer has cited the book as a key influence.

Obviously, Kobach studied with Huntington before his mentor took that last, dramatic turn. But he did study with him during the struggle over apartheid, and the side Kobach took is revealing. “Under Huntington’s guidance, Kobach wrote his senior thesis on how the movement to divest from South Africa was misguided because international businesses were already leading the way against apartheid,” Ari Berman notes in a New York Times profile of Kobach.

To be clear, many people went through Harvard, read and took classes with Huntington, and did not wind up being anything remotely like Kris Kobach. (The Atlantic’s James Fallows was one.) Huntington was not a sort of racist Midas touch, where you take a class and come away wanting to deport Muslims.

But Kobach’s experience at Harvard, Oxford, and Yale enabled his career. It gave him markers of respectability (up to and including a tenured faculty post) that enabled him go from town to town, asking officials to pass anti-immigrant or anti-suffrage bills, and to get “yes” for an answer. It’s hard to imagine someone from, say, Cooley Law School being received so openly and rising so quickly. (That seemingly only happens in the Trump Organization.)

Kobach isn’t alone. White House adviser Stephen Miller didn’t have a Huntington figure during his time at Duke; in all the profiles written about Miller, I’ve yet to find one that mentions a professor who mentored him or even liked him. But it was Miller’s role as a conservative voice on campus during the Duke lacrosse scandal (a scandal that became a national affair only because of Duke’s elite status) that catapulted him into a career as a policy aide on Capitol Hill, and now in the White House. He, like Kobach, leveraged elite credentials to implement racist policies.

Further on the fringes of American life, Richard Spencer’s time as a Duke grad student, and Jared Taylor’s Yale pedigree, have helped lift them from obscurity into being commonly cited voices from the “race realist” movement. They got a patina of respectability, a sense that they’re a different, higher class of racist.

Working-class white racists can inflict a lot of harm; hate crimes in this country are a real thing, committed by people with all kinds of income and education levels. But economically unprivileged whites typically don’t cause damage on the scale of Miller or Kobach — or even Spencer or Taylor. That escalation requires elite credentials and connections.

Maybe this problem is inevitable. It’s probably impossible, and definitely inadvisable, for elite schools to aim to admit no students who are susceptible to racist demagoguery, or who stand a good chance of becoming racist demagogues themselves. That would likely result in ideological discrimination, which in turn would worsen institutions’ ideological self-segregation in ways that even liberals and leftists should agree are harmful.

But if nothing else, I hope Kobach can help change our mental image of an American racist, from lazy stereotypes of manual laborers to a Yale-trained lawyer with a PhD, whose racial views come in part from a celebrated Harvard professor. That’s the bigger danger.