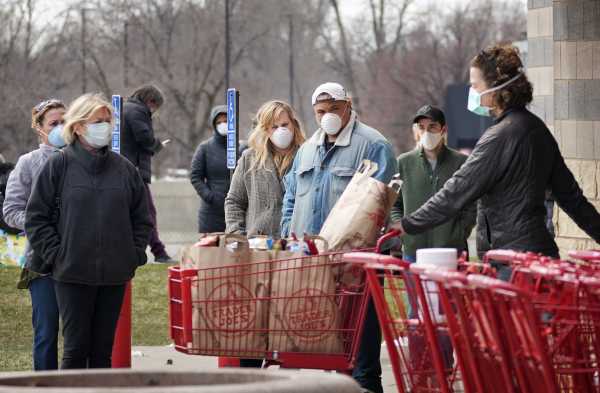 About half of US households have lost income due to the coronavirus pandemic, according to a new poll, but the same survey found that a majority of Americans nevertheless want to keep most social-distancing practices in place.

To be sure, the new NPR/PBS Newshour/Marist poll (conducted April 21 through April 26) found that the economic devastation is only increasing as the pandemic continues. The number of adults who said that they or another member of their household had either lost their job or seen their hours reduced because of the pandemic (50 percent) more than doubled from 18 percent in last month’s poll.

The polling data of 1,008 US adults backs up the hard statistics showing the the sudden collapse of the economy due to the virus. Over the last five weeks, over 26 million Americans have filed initial claims for unemployment, throwing family budgets all over the country into chaos.

In response to the job losses, many conservative politicians, governors, and President Donald Trump have either begun calling for states to reopen, or actually lifting shelter-at-home orders, effectively reopening individual state economies, albeit with restrictions. Georgia, South Carolina, and Tennessee were among the first states to begin the reopening process, and several more, like Colorado, were close behind.

In Iowa, Republican Gov. Kim Reynolds has moved to partially reopen 77 of the state’s 99 counties on May 1, and the state government has said that any employee not returning to work because of the pandemic will be cut off from state unemployment benefits.

According to the NPR poll, and another new survey from Morning Consult, most Americans seem to be weighing their lives versus their livelihoods a little differently.

Americans do not want to go back to work yet

Protests against individual state shelter-at-home orders have drawn widespread media coverage throughout the country, however it seems those pushing for lifting such order represent a small minority of Americans.

Polls have consistently shown that the majority of people in the US do not want to relax social distancing guidelines or lift shelter-at-home orders until more is done to combat the effects of Covid-19, the disease caused by the novel coronavirus.

A Politico/Morning Consult poll of 1,991 registered voters conducted April 24-26 showed that nearly three in four (73 percent) voters said the US should continue social distancing measures even if it further damages the economy. Just 15 percent of voters said social distancing measures should be lifted even if it means further spreading the virus.

Beyond the immediate policy concerns. however, most voters expect the pandemic to continue. Seventy-nine percent said a second wave of the virus is likely or somewhat likely, and only 9 percent said it is unlikely.

Despite the fact that Trump and the White House have released a plan for states to ease restrictions and many states are beginning to reopen, just 19 percent of voters expect social distancing guidelines to end within the next two months.

And that’s probably a correct prediction — and a safer path — based on what countless experts have said about the continued lockdowns. In places like Germany, where a second wave may have hit shortly after it began reopening, caution has been prioritized. Dr. Deborah Birx, one of the White House coronavirus task force’s top public health officials, said Sunday that Americans should expect to practice social distancing through the summer.