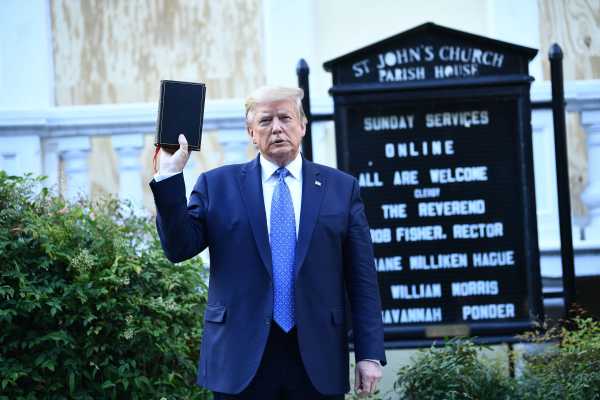 The poll consisted of more than 10,000 voters nationwide and was conducted between September 30 and October 5. White Catholic voters turned away from the president most sharply: Trump still leads Biden by 8 percentage points among that group (52 to 44 percent), but as recently as late July and early August, that margin was 19 points (59 to 40 percent). White non-evangelical Protestants have followed a similar trend, with support for Trump declining from 59 to 53 percent since the summer.

Even among the president’s strongest group, white evangelical Protestants, his support has diminished slightly. White evangelicals favored Trump over Biden by a 78 to 17 percent margin in the recent poll, but over the summer, their support for the president was even stronger, at 83 percent. Trump’s slight decline with all three groups, however, did not correspond with a significant increase in support for Biden.

Pew surveyed voters shortly after the first presidential debate, and Trump announced he had tested positive for the coronavirus about halfway through the survey window.

The proportion of white Christians among total voters has also declined recently, but they still represent 44 percent of the electorate and are especially crucial to Republicans. Nearly every other religious group, including Black Protestants, Hispanic Catholics, and Jews, favored Biden in the summer and fall Pew surveys, as did religiously unaffiliated voters.

Biden’s support is strong among all of those groups, the poll revealed. Ninety percent of Black Protestant voters polled said they favor the former vice president, along with 70 percent of Jews, 60 percent of Hispanic Catholics, 83 percent of atheists and agnostics, and 62 percent of those who said they had no religion in particular. Trump polled no higher than 31 percent with any of those groups.

Trump has made some progress among Black Protestants and particularly Hispanic Catholics since 2016. Hillary Clinton won by 93 percentage points with Black Protestants in 2016, and by a 59 percentage point margin with Hispanic Catholics, per Pew’s review of validated voters. But as the Washington Post’s Philip Bump explained, those modest gains aren’t enough to offset Trump’s eroding support among white voters — religious or otherwise.

Even with the slight declines, Trump remains dominant among one group of white Christian voters: those who identify as evangelicals.

Most white evangelical Protestants have long voted for Republicans. Although Trump’s style differs from previous Republican presidents, he has maintained — if not increased — his support with that group throughout most of his first term. During the 2016 campaign, the Access Hollywood tapes were released, which showed Trump talking in lewd terms about sexually assaulting women. Trump’s support among white evangelicals was unharmed.

That wasn’t as counterintuitive as it may seem, Kristin Kobes Du Mez, a historian at Calvin University who has studied evangelicals for 15 years, told Vox’s Sean Illing in July. Du Mez said that many evangelicals consider Trump their “great protector,” and he plays right into the evangelical idea of “militant masculinity.”

“It’s important to understand that the appeal of Trump to evangelicals isn’t surprising at all, because their own faith tradition has long embraced this idea of a ruthless masculine protector,” Du Mez said. “This is just the way that God works and the way that God has designed men. He filled them with testosterone so that they can fight. So there’s just much less of a conflict there.”

Moreover, many white evangelical voters’ policy views align with the president’s — even on some of his most hard-line stances, like immigration, Vox’s Nicole Narea explained last year: