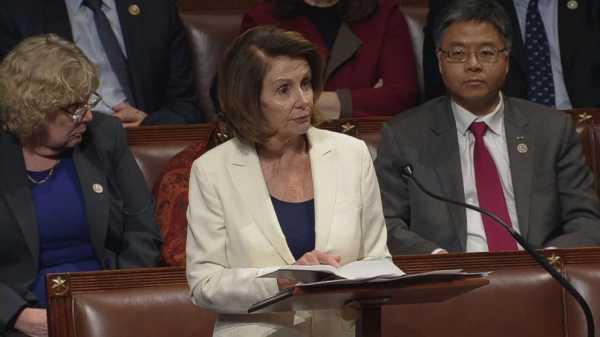 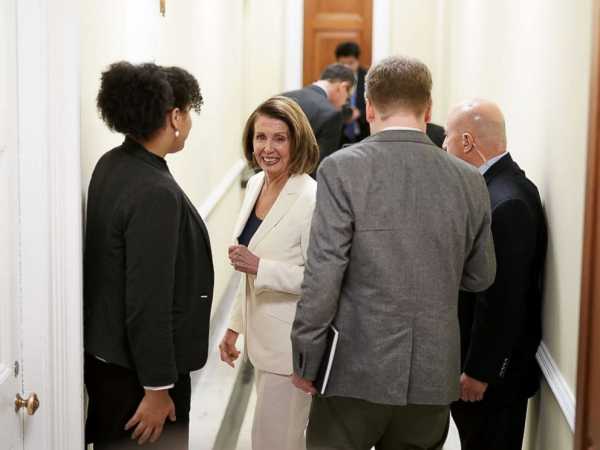 Alex Wong/Getty ImagesHouse Minority Leader Rep. Nancy Pelosi (D-CA) (C) on her way returns to her office after a long speech on immigration at the Capitol, Feb. 7, 2018.

She yielded the floor at 6:11 p.m., precisely eight hours and seven minutes after she began.

Pelosi announced she and a “large number” of House Democrats will oppose any deal unless Speaker Paul Ryan commits to a future open immigration debate, complaining House Democrats are second-class members of Congress without a commitment from Ryan.

After speaking for more than five hours, Pelosi was handed a note, saying it read “a vote will occur soon after I yield back.”

“I have no intention of yielding back, Mr. Speaker,” Pelosi said, referring to the presiding officer – apparently not House Speaker Paul Ryan – and then put down the note to continue reading.

Throughout the speech Pelosi took sips of water and an aide told ABC News she had nothing to eat. An aide also said she was wearing four-inch stilettos during the entire day-long speech. She did not stop speaking to use the bathroom or take any other breaks. House Democrats cycled in and out to sit behind her in the chamber with dozens of members seated around her at one point.

One Republican, Rep. Mark Walker, tweeted that he was less inclined to support the House deal the longer Pelosi spoke.

As minority leader, Pelosi can speak uninterrupted on the House floor. She read letters from Dreamers to members of Congress describing how the DACA policy helped them pursue their education or apply for jobs. Pelosi said she wanted their stories to be part of the Congressional Record.

“We want to be sure that the public record of the Congress of the United States forever more will reflect the stories of their great contribution to America in the hopes that those stories will move the Speaker of the House to give us a vote,” Pelosi said.

When asked if the president would like to see immigration added to the budget deal White House press secretary Sarah Sanders said immigration is a separate issue and Pelosi should support a budget deal.

“I think we’ve made clear that the budget deal should be a budget deal, and that members of Congress, like Nancy Pelosi, should not hold our military hostage over a separate issue. We’ve laid out what we would like to see in immigration legislation, and I think it’s something that Nancy Pelosi should support,” Sanders said in the briefing. 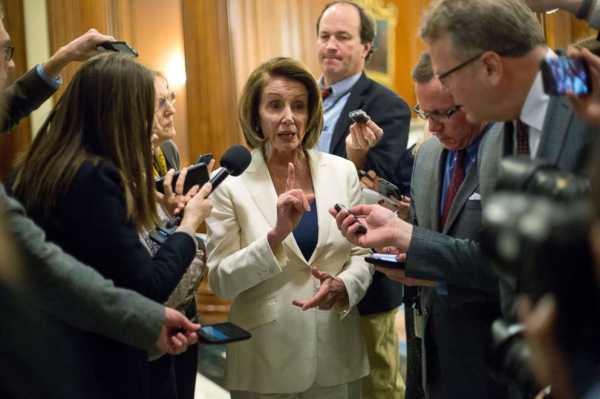 One of the letters Pelosi read was from Gladys Klamka from Phillipsburg, N.J. Klamka said her parents brought her to the United States from Mexico when she was two years old and that they would have put her up for adoption if they stayed in Mexico. When she was four years old, she wrote, she was sexually molested by a 16-year-old boy but her parents didn’t report it because they were afraid of being deported. She applied for DACA status in 2012 and said she now works in health care.

“After election day I wondered if this dream would soon end, it’s been a hard reality check that privileges could be taken away,” Pelosi read from Klamka’s letter.

Pelosi read another letter from Jirayut New Latthivongskorn who said his parents brought him to the U.S. from Thailand when he was nine years old. Pelosi said he worked 30 hours a week at his family’s restaurant while he was in high school and still graduated with a 4.3 grade point average. He went to the University of California – Berkeley but had to deny a scholarship that would have covered most of his tuition because of his immigration status.

The DACA program was established in 2012 just a month after Latthivongskorn graduated from college with degrees in molecular and cellular biology, Pelosi said. In 2014 he began medical school at the University of California San Francisco where he volunteers at a homeless clinic and started a network for Dreamers pursuing jobs in health care. He was the school’s first undocumented student and was included in Forbes magazine’s 2017 “30 Under 30” list, according to the UCSF website.

“Will America be a stronger country if we deport him and others like him? Will we be a better country if we tear apart American families? Of course not we all agree on that,” Pelosi said.

Referring to the sweeping Senate budget deal unveiled Wednesday, Pelosi boasted Democrats secured “hundreds of billions” of dollars for their legislative priorities by extracting a dollar-for-dollar deal on defense and non-defense spending.

But she demanded Ryan match Senate Minority Leader Mitch McConnell’s commitment to the Senate to open the upper chamber for free and clear debate on immigration.

“So why can’t we have some sort of commitment on this side?” Pelosi asked Wednesday.

“Speaker Ryan has already repeatedly stated we intend to do a DACA and immigration reform bill – one that the president supports,” Strong said in a statement.

Pelosi pointed to a bipartisan bill by Reps. Will Hurd, R-Texas, and Pete Aguilar, D-Calif., and said Ryan should start with that bill, “and any other bills he believes should be considered” through the Queen of the Hill process, where the measure with most votes becomes the prevailing bill to reconcile with what whatever immigration solution the Senate settles upon.

“Why should we be treated in such a humiliating way when the Republican Senate leader has given that opportunity in a bipartisan way to his membership?” Pelosi said. “Without that commitment from Speaker Ryan… this package does not have my support nor does it have the support of a large number of members of our caucus.”

“What are you afraid of?” Pelosi said of Ryan. “Give us a vote. Let the House work its will.” 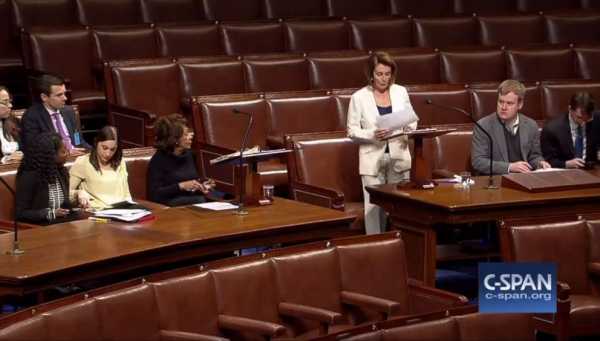 CSPAN/TwitterLeader Nancy Pelosi spoke on the House Floor this morning, Feb. 7, 2018, to address the emerging bipartisan caps deal in the Senate, pointing to several “Democrat priorities” but drawing the line over Dreamers.

House Democrats changed plans for their scheduled retreat in Cambridge, Md. this week to stay in D.C. and be on hand for the debate.