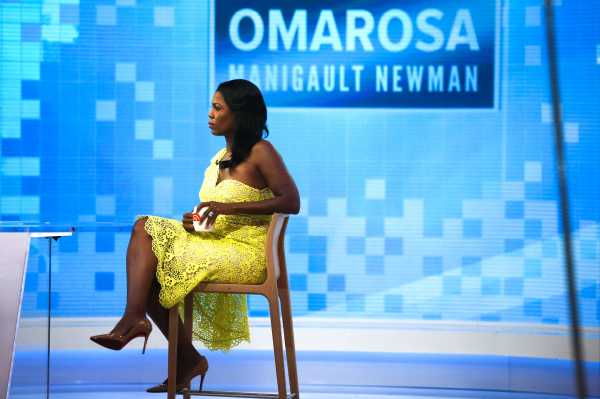 President Donald Trump’s decision to hire — and then fire — Omarosa Manigault-Newman is one he’s surely come to regret. The Apprentice contestant turned White House aide has turned on her former boss, including releasing secret recordings from the White House and accusing the president of using racist language.

Manigault-Newman, 44, is making the media rounds to promote her upcoming book, Unhinged, which is set for release on Tuesday. In the book, she reportedly makes a number of accusations, including that there’s a tape of Trump repeatedly using the n-word, that the president is in a state of mental deterioration, and that Trump used racial epithets when talking about Kellyanne Conway’s husband, George Conway, who has Filipino ancestry. (George Conway has called the allegations “ridiculous.”)

Given the rancorous nature of Manigault-Newman’s exit from the White House and her hints that she had a story to tell while appearing on CBS’s Celebrity Big Brother, it was anticipated that her book and media tour would bring some drama. And they have.

Here’s what’s happened: Last week, reports began to percolate that Manigault-Newman, who made appearances on The Apprentice starting in 2004 and served in the Trump administration until December 2017, had secret recordings of Trump and was playing the audio for others. Excerpts of her book began to come out as well, which included some of the allegations mentioned above.

Over the weekend, Manigault-Newman appeared on NBC’s Meet the Press, during which she played a recording of Chief of Staff John Kelly firing her, which she made in the White House situation room, and accused the Trump campaign of trying to buy her silence. And on Monday, Manigault-Newman played another tape, this time of a phone call with Trump, who seemed dismayed after she was fired.

The White House has put out statements trying to discredit Manigault-Newman. Trump called her a “lowlife” when responding to a question about her on Saturday, and on Monday, he attacked her on Twitter.

This was almost bound to happen. Manigault-Newman — who worked as an assistant to the president and director of communications for the Office of Public Liaison — is a former reality TV star (and villain) who knows how to get attention. With the furor that’s greeted other purported tell-alls about the Trump White House, especially Michael Wolff’s Fire and Fury, Omarosa’s book was always likely to become a perfect storm.

Omarosa says there’s a tape of Trump saying the n-word, though her story has changed on whether or not she’s heard it

The Guardian, which obtained an early copy of Unhinged, on Friday reported that the former Apprentice contestant claimed Trump was a “racist” who had used the n-word repeatedly. Manigault-Newman says in her book that three unnamed sources have told her there’s a tape to prove it, echoing accusations made by actor Tom Arnold, who has also said Trump used racist epithets while the show was filming.

In her book, Manigault-Newman claimed she hadn’t personally heard Trump use the n-word or listened to the alleged tape, according to NBC News.

But over the weekend, she gave a slightly different story: She said in an appearance on Meet the Press with Chuck Todd on Sunday that she had, indeed, heard the tape since the book was finished.

“I have heard for two years that it existed. And once I heard it for myself, it was confirmed what I feared the most, that Donald Trump is a con and has been masquerading as someone who is actually open to engaging with diverse communities. But when he talks that way, the way he did on this tape, it confirmed that he is truly a racist,” she said.

The White House has shot down Manigault-Newman’s accusations and sought to cast her as an angry former employee looking for revenge.

Press secretary Sarah Sanders said in a statement on Friday that Manigault-Newman’s book is “riddled with lies and false accusations” and doesn’t tell the truth about “all the good” the administration is doing. “It’s sad that a disgruntled former White House employee is trying to profit off these false attacks,” she said.

On Saturday, Trump responded to a shouted question from the press pool about his thoughts on Manigault-Newman and her book. “Lowlife,” Trump said. “She’s a lowlife.”

Omarosa has started playing the tapes

The Daily Beast reported last Wednesday that Manigault-Newman had secretly recorded conversations with the president and was playing them for others while shopping her book. Other outlets followed.

On Sunday, the first of the “Omarosa tapes” was made public on national television, when Manigault-Newman revealed in her Meet the Press interview that she had taped Kelly in the Situation Room talking to her when she was fired. NBC played the tape.

Manigault-Newman was abruptly fired from the White House in December, and according to some reports, her departure was acrimonious.

Manigault-Newman told Todd she was releasing the recording to prove that the circumstances of her ouster weren’t so turbulent. “If I did not have this recording, people would still believe the false, incredible story that I was running around the White House,” she said. She said she had “no regret” about making the recording.

The network then played part of the recording of Kelly speaking to Omarosa:

In later excerpts of the recording, Manigault-Newman pushes back on the decision, asking whether the president was “aware of what’s going on” and noting this was apparently the first time she’d spoken with Kelly.

Kelly told her it was a “nonnegotiable discussion” and said her firing was tied to “pretty serious integrity violations.”

Sanders, the White House press secretary, reacted to Manigault-Newman’s recording in a statement later on Sunday. “The very idea a staff member would sneak a recording device into the White House Situation Room, shows a blatant disregard for our national security — and then to brag about it on national television further proves the lack of character and integrity of this disgruntled former White House employee,” she said.

National security experts and former White House officials expressed alarm at the idea of someone making a secret recording in the Situation Room, which is supposed to be one of the most secure conference rooms in the world. Lawfare executive editor Susan Hennessey tweeted that Manigault-Newman’s recording was a breach of trust, a grave security risk, and likely a violation of the law. Ned Price, who served as a spokesperson for the National Security Council under Obama, told the Washington Post he had “never heard of a more serious breach of protocol.”

During her Meet the Press interview, Manigualt-Newman said she was “complicit with the White House in deceiving this nation” and claimed the Trump administration was hiding the president’s mental decline. She said it was hard for him to process conflict information and claimed he was not engaged “in some of the most important decisions that impact our country.” She said that Trump was “truly a racist,” citing the tapes she said she had now heard.

She did not, presumably, take the job, and it is unclear if she signed any agreement. On Monday, Trump tweeted that Manigault-Newman did have a non

Omarosa played a tape of Trump, too

Manigault-Newman appeared on NBC’s Today for an interview with Savannah Guthrie on Monday and played another tape — one of a conversation with Trump. Here’s the exchange, in which Trump sounds genuinely exasperated at her dismissal from the White House:

Manigault-Newman told Guthrie she wasn’t sure if Trump was lying when he said he didn’t know she would be fired but said if that was the case, “that should be alarming” to the American people. “Is Gen. Kelly running this country or is the president running this country?” she asked.

She wouldn’t say how she obtained the recording of the conversation with Kelly in the Situation Room and confirmed her allegations that there was a tape of Trump saying the n-word, which she said is “about three minutes” of audio.

Beyond the “lowlife” comment on Saturday, President Trump largely avoided weighing in on Manigault-Newman — until Monday. He fired off tweets about her on Monday morning, calling her “vicious, but not smart.” He said that Kelly had encouraged him to fire her but he tried to give her a chance “because she only said GREAT things about me — until she got fired!”

He also called her a “lowlife” again.

With Manigault-Newman’s book set for release on Tuesday and more stops on her press tour, the Omarosa drama is likely to continue, and more rumors are already swirling. Unnamed former colleagues of the reality television star spoke to Axios about her supposed “reign of terror” in the White House, presumably to cast doubt on her credibility and character. Yashar Ali, a writer for New York magazine and HuffPost, tweeted on Monday that some in Trump’s orbit were worried Manigault-Newman was recording with a pen.

Nothing especially damning or revealing has come from Manigault-Newman’s recordings thus far, but their existence has gotten a lot of attention for her book. That’s likely to continue, at least during the book’s release.