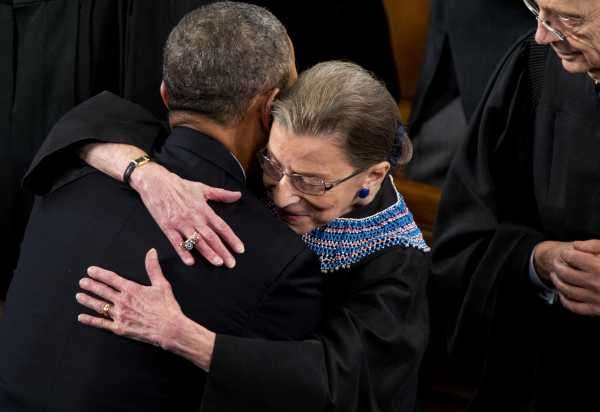 Former President Barack Obama called Ruth Bader Ginsburg a “a relentless litigator and an incisive jurist” in a statement Friday night, shortly after the 87-year-old Supreme Court justice’s death due to complications with cancer.

Obama’s statement was brief, praising Ginsburg for inspiring the generations that followed her, “from the tiniest trick-or-treaters to law students burning the midnight oil to the most powerful leaders in the land.” He noted that both he and his wife, Michelle Obama, admired her and the work of her long career.

While Ginsburg’s legal legacy runs deep, Obama highlighted in particular the groundbreaking work she put into establishing gender equality under the law. “Justice Ginsburg helped us see that discrimination on the basis of sex isn’t about an abstract ideal of equality; that it doesn’t only harm women; that it has real consequences for all of us. It’s about who we are — and who we can be,” Obama wrote.

Obama’s words were joined by the voices of thousands praising Ginsburg’s life and legacy. Several hundred people gathered late Friday night on the steps of the Supreme Court to praise the justice known for her sometimes fiery and defiant dissents.

President Donald Trump honored the late justice’s memory Friday night as well, after apparently first learning of Ginsburg’s death from reporters Friday evening following a rally in Minnesota, a moment that was caught on camera. “She was an amazing woman,” the president said after an initial look of surprise.

The president later released a statement praising Ginsburg, saying: “Justice Ginsburg demonstrated that one can disagree without being disagreeable towards one’s colleagues or different points of view.”

Trump’s salute could be seen as ironic given what appears to be an upcoming Senate battle over replacing Ginsburg on the court. Within hours of her death, Senate Majority Leader Mitch McConnell promised that whoever Trump nominates to replace Ginsburg will see a floor vote in the Senate, regardless of Republicans arguing during Obama’s final year in office that incoming presidents ought to be allowed to nominate justices.

Democratic presidential nominee Joe Biden has also called for Republicans to follow this precedent that they created. Obama’s own election year nominee, Merrick Garland, was infamously held up by McConnell.

Ginsburg’s final statement was on the topic of her legacy. Shortly before her death, she reportedly told her granddaughter Clara Spera, “My most fervent wish is that I will not be replaced until a new president is installed.”

And Obama argued that this wish be honored.

“A basic principle of the law — and of everyday fairness — is that we apply rules with consistency, and not based on what’s convenient or advantageous in the moment,” Obama wrote. “The rule of law, the legitimacy of our courts, the fundamental workings of our democracy all depend on that basic principle.”

Trump did not mention a replacement for Ginsburg in any of his statements, but did retweet a statement from Sen. John Thune (R-SD) that said, “As Leader McConnell has said, President Trump’s Supreme Court nominee will receive a vote on the floor of the U.S. Senate.”

Debate about the vote is intensifying, with congressional Democrats echoing Obama and Biden’s calls, and many Republicans arguing that Trump cannot allow an opportunity for a majority conservative court to pass by.

The stakes are high, and Obama argued that is exactly why the winner of the next election must be allowed to choose the next Supreme Court justice: “The questions before the Court now and in the coming years — with decisions that will determine whether or not our economy is fair, our society is just, women are treated equally, our planet survives, and our democracy endures — are too consequential to future generations for courts to be filled through anything less than an unimpeachable process.”