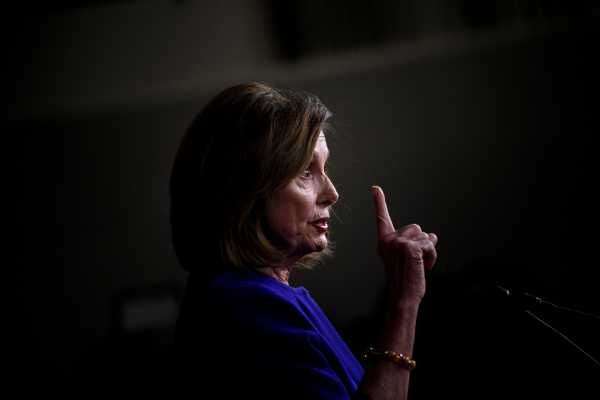 Much has been made of House Speaker Nancy Pelosi’s decision not to send Trump’s articles of impeachment to the Senate following the House’s impeachment vote in December.

President Donald Trump and his GOP allies have claimed the delay shows his impeachment was a partisan effort to stain his legacy rather than an attempt to check his conduct, pointing out that Pelosi said Trump asking Ukraine to investigate his political rival constituted an “urgent concern” to national security. They argue that if it was an urgent concern, she would have sent the articles immediately.

Democrats meanwhile, were reportedly kept in the dark about the delay, with CNN reporter Manu Raju reporting that even Senate Minority Leader Chuck Schumer was not informed about the hold — or when Pelosi planned to send the articles over.

On Friday, Pelosi announced the articles would finally be sent, allowing the Senate’s impeachment trial to begin, and Sunday she appeared on ABC’s This Week, explaining why she chose to hold on to the articles for so long.

There were three primary reasons for the delay, according to the speaker.

First, she hoped to pressure Senate Republicans into accepting Democrats’ requests that witnesses be called in the trial.

“We wanted the public to see the need for witnesses, witnesses with firsthand knowledge of what happened,” Pelosi told This Week’s George Stephanopoulos.

Senate Majority Leader Mitch McConnell was initially resistant to Democratic calls for witnesses — in fact, he reportedly privately spoke of the need to have a trial without witnesses — and was criticized by Democrats for saying he’d work “in total coordination with the White House counsel’s office” throughout the trial.

Pelosi wasn’t entirely successful in changing his mind on the issue of witnesses, but McConnell did shift slightly — the Republican position evolved: now GOP senators say the trial should reflect the impeachment trial of President Bill Clinton, meaning that the issue of witnesses could be taken up after opening statements.

Key GOP senators who have been critical of the president with respect to his pressure campaign on Ukraine — and who voiced concern over how McConnell originally framed the Senate process — have signaled some willingness to entertain the idea of witnesses down the line.

Whether this means the trial actually will have witnesses — particularly the four desired by Democrats — remains to be seen, but Pelosi called this shift a win Sunday, and did the same when speaking about former National Security Adviser John Bolton’s surprise announcement that he would cooperate with a Senate subpoena and testify if told to do so.

“Over 70 percent of the American people think that the president should have those witnesses testify. So, again, it’s about a fair trial,” Pelosi said. “And we think that would be with witnesses and documentation. So, that dynamic has — now the ball is in their court to either do that, or pay a price for not doing it.”

The speaker added, “[Bolton] has said in this two weeks’ period, there was another piece of progress that we made, that he would respond to a subpoena from the United States Senate.”

Pelosi also said the delay was to allow the public time to see further “documentation which the president has prevented from coming to the Congress” — that is, more evidence of wrongdoing.

As Vox’s Li Zhou has explained, more evidence has indeed come to light:

Finally, Pelosi suggested that the delay helped create contrast between Democrats in the House and Republicans in the Senate.

McConnell and Senate Republicans, she argued, are not taking impeachment seriously, but rather looking for ways to protect the president. The process has shown Democrats on the other hand, as lawmakers who put the Constitution first, she said.

“But the fact is, is one of the things that I think is really important, what I think people should be very aware of, very unusually, the leader of the Senate, Mitch McConnell, has signed on to a resolution to dismiss the case,” Pelosi said. “Dismissing is a cover-up. If they want to go that route, again, the senators who are thinking now about voting for witnesses or not, they will have to be accountable for not having a fair trial.”

She went on to say, “We’ve done our job. We’ve defended the Constitution of the United States. We would hope that the Senate would do that as well.”

Both parties will have another chance to advance their arguments during the trial. Pelosi said she’ll hold a vote on transmitting the articles to the Senate Tuesday, and a trial could start soon after those articles are received.

Exclusive: State cable shows plan to restrict pregnant people from visiting the US