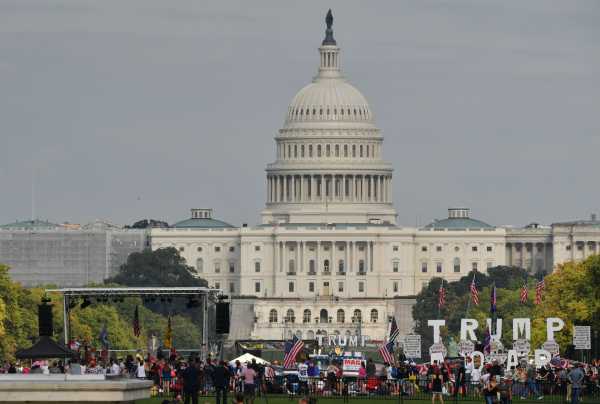 More and more Republicans are looking at how the 2018 elections are shaping up — and deciding they want no part of them.

This makes 21 House Republicans and three GOP senators who are calling it quits, not counting several more who are stepping down to run for another political office (or who have already resigned).

Viewed in historical context, that number of Republican retirements is clearly on the high side. And reports have suggested that this is just the start, and that several more GOP House members — perhaps many more — will also soon announce they’ll head for the exits.

Revealingly, only eight House Democrats and zero Democratic senators have so far made the same choice. (Sen. Al Franken of Minnesota resigned due to scandal, but his seat has already been filled by Tina Smith, who will run this fall.) That’s a dramatic discrepancy.

Though the explanations offered for these decisions differ, and though many of these GOP-held seats are in no real danger of flipping to Democrats, these retirements are revealing how members of Congress currently view the national political environment. That is: they think there’s a real possibility of a Democratic wave.

But the trend is more meaningful even than that. These very retirements could help make such a wave even bigger, because it’s generally easier for the opposition party to flip open seats than it is to knock off incumbents.

More Republicans than Democrats are choosing to head for the exits

In trying to read tea leaves from US House retirements, it’s useful to separate out the members who are exiting politics altogether for the time being from those who are just leaving the House to run for another political office.

There are also a few others who have quit or plan to quit in the middle of their term, but their seats will be already be filled by replacements from special elections by the time November 2018 rolls around. These are former Reps. Trent Franks (R-AZ) and Tim Murphy (R-PA), each of whom resigned due to scandal, and Rep. Pat Tiberi (R-OH), who stepped down this month to take another job. (Rep. Jason Chaffetz of Utah also stepped down last year, but his seat has already been filled by another Republican who is running again.)

Viewed in historical context, that number is quite high, as you can see over at FiveThirtyEight. It’s still below the 27 GOP incumbents who retired toward the end of George W. Bush’s presidency in 2008, but it’s above the 21 who retired in the midst of the Watergate scandal in 1974. And of course, it’s only January 2018, meaning there’s still more time for this cycle’s number to rise.

Furthermore, what’s very clearly not normal is the discrepancy between the parties. So far, all of the Democratic senators up in 2018 are running for reelection. And only seven Democratic House members — Rep. Niki Tsongas (D-MA), Rep. Carol Shea-Porter (D-NH), Rep. Gene Green (D-TX), Rep. Luis Gutierrez (D-IL), Rep. Sander Levin (D-MI), Rep. Ruben Kihuen (D-NV), and Rep. Bob Brady (D-PA) — are retiring and not running for another office. Another, Rep. John Conyers, (D-MI), resigned due to scandal.

According to FiveThirtyEight’s numbers, the only time in the past 40 years there’s been a bigger partisan discrepancy in this stat was 2008, which turned out to be a Democratic wave year.

Why Republicans are retiring

The discrepancy in retirements between the two parties suggests that many Republicans fear a backlash against their party due to President Donald Trump’s poor approval rating. And that fear will only be exacerbated by sweeping Democratic victories in Virginia’s elections, and overall strong Democratic performance in 2017 special elections.

Now, it’s not the case that every Republican retiring personally fears losing reelection, or that all of these retirements open up promising pickup opportunities for Democrats.

Several retirees are in safe red districts and face little danger. A few have explained their choices by citing term limits for committee or subcommittee chairmanships they currently hold. Others may just be getting old and ready to pack it in.

But the national political environment can still be one important factor among many weighing on their decisions. For instance, even some GOP incumbents in no danger of losing may not feel like sticking around if they think their party may be soon fall into the minority.

Others — like Frelinghuysen and LoBiondo, longtime New Jersey Congress members first elected in the 1990s, or Reichert, a Washington Congress member who’s managed to win several times in his Democrat-leaning district — would be the favorites to win if they ran again. But they haven’t faced tough reelection challenges in years, and may simply be reluctant to face a difficult, grueling race with an uncertain outcome.

These retirements aren’t only a sign that the GOP thinks a Democratic wave is coming — they may well help bring it about.

That’s because of something political scientists have dubbed the “incumbency advantage.” A wealth of US historical evidence shows that incumbent politicians do better in elections than nonincumbents do. They’re more likely to win, and open seats are more likely to flip to the other party than are seats where an incumbent is running again are.

Obviously, this doesn’t hold true for all incumbents — sometimes they’ll have unique vulnerabilities, whether that be scandal or a controversial political record. But when you think about it, the incumbent advantage is pretty intuitive. These politicians have won elections in their particular districts and states before. They’ve built up name recognition, become skillful fundraisers, hired experienced staffers, and presumably amassed some knowledge about how best to win.

From that perspective, these GOP retirements are obviously good news for Democrats. It’s likely to help Democratic recruiting too, as potentially strong candidates are often more willing to run in an open-seat contest than to take on an incumbent. (For instance, New Jersey Democrats have been trying to get state Sen. Jeff Van Drew to challenge LoBiondo for years. They’ve never succeeded, but now that LoBiondo’s retiring, Van Drew finally jumped in.)

However, it’s worth noting that the exact size of the incumbency advantage tends to vary by office and by year — and it seems to be much smaller in House elections during wave years. You can see in this chart from FairVote, which estimates how incumbents perform compared to the underlying partisanship of their respective districts.

In more-or-less neutral congressional years without a big wave for one party or the other, FairVote finds the incumbency advantage has recently been somewhere between 3 percent and 7 percent.

But in wave years, the parties’ incumbents’ fortunes sharply diverge. In 2010 and 2014, for instance, Democratic incumbents barely had any advantage at all (0.9 percent and 0.46 percent). And in 2006 and 2008 — two anti-GOP wave years — the Republican incumbent advantage shrank to 2 percent, while Democrats’ rose quite high.

So it’s not necessarily the case that a flood of GOP retirements will make an enormous difference in how House elections turn out — a wave takes down many incumbents too. Still, as Democrats struggle to overcome gerrymandering and other disadvantages, they’re thankful for any edge they can get — and GOP retirements will be tipping the scales more in their favor.