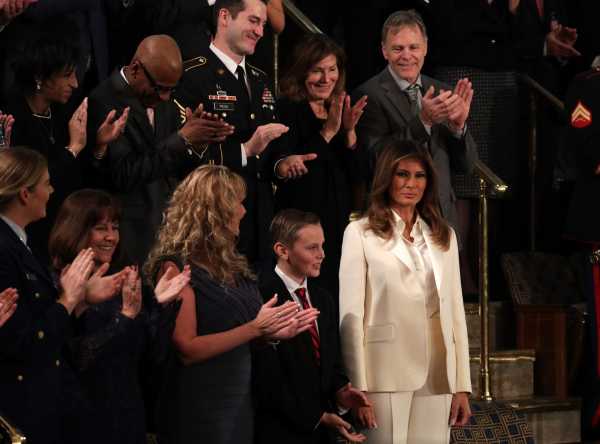 An unexpected side drama played out during President Donald Trump’s first State of the Union address Tuesday night.

First lady Melania Trump traveled without her husband to the Capitol for the event, a break with tradition, CNN reported. Melania chose to commute with the guests she and the president had invited to the speech. She and Karen Pence hosted “a more intimate meet-and-greet” with those guests ahead of the State of the Union, the first lady’s communications director Stephanie Grisham told CNN.

Yet Melania’s decision to travel separately is getting an unusual amount of attention because the first lady has avoided public appearances since a January 12 Wall Street Journal report. The Journal reported that during the 2016 campaign, Trump’s attorney, Michael Cohen, had paid $130,00 to adult film star Stormy Daniels to keep her quiet about an alleged sexual encounter between her and Trump in 2006.

Daniels has said the affair took place less than four months after Melania gave birth to the couple’s son Barron. (She has since denied the encounter with Trump.)

Melania hasn’t just stayed out of the public eye in recent weeks — she also dropped her plans to accompany the president to the World Economic Forum in Davos, Switzerland. Instead, she made an impromptu trip to the US Holocaust Memorial Museum in Washington, DC, ahead of Holocaust Remembrance Day, and then headed to Mar-a-Lago for the weekend.

After the Daniels story broke, Melania traveled to Mar-a-Lago with the president over Martin Luther King Jr. weekend, but she reportedly wasn’t seen at two dinners. Two people close to the Trumps told the Times that the reported “payoff blindsided the first lady, who was furious with her husband.”

Melania has been something of an independent first lady, only moving to the White House in June. She had chosen to stay in New York with their son Barron until he finished school. She has also defended her husband’s indiscretions in the past, most notoriously after the Access Hollywood tape leaked during the campaign, which she called “boy talk.”

White House press secretary Sarah Huckabee Sanders downplayed the Trumps’ travel arrangements, saying Melania traveled separately for “no reason other than she can greet the guests and he can go straight in.”

Melania did enter her box alone, walking in to a standing ovation. Her outfit also got some attention. She chose a Christian Dior pant suit — which some saw as white, others as cream. Female Democratic lawmakers dressed in white — which suffragettes wore as they fought for the right to vote — in protest of Trump’s first speech to Congress last year. (Also, another pretty notable female politician wore a white pantsuit to Trump’s inauguration one year ago.)

The first family were reportedly heading back to the White House together after Trump’s address. But it will probably do little to quash the latest cries of “Free Melania.”