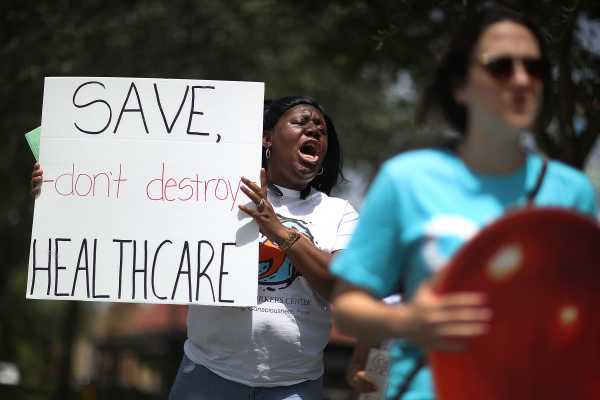 The latest conservative challenge to the Affordable Care Act surged back into the news Thursday when the Trump administration argued in a legal brief that it believes the health care law’s protections for preexisting conditions are unconstitutional.

The administration’s position is notable no matter what — Trump lawyers are arguing that Obamacare’s most popular provisions should be totally eliminated — but the case behind them has not received much attention until now. There’s a good reason for that: Legal experts on the left and the right believe the arguments being made by Republican-led states are, on their face, absurd.

There is a history of lawsuits that most legal experts thought were unpersuasive nonetheless putting ACA in mortal danger — namely, the lawsuit that sought to invalidate Obamacare’s tax subsidies in states that relied on a federally run marketplace. And regardless, the Trump administration’s position represents yet another line of attack on Obamacare’s core insurance reforms.

But the lawsuit very well might not go anywhere. Legal scholars of all ideological stripes think it shouldn’t. Here’s why.

The case brought by several conservative states, led by Texas, argues that because Republicans in Congress repealed Obamacare’s individual mandate penalty in their 2017 tax bill, the mandate is now unconstitutional — and so is the rest of the law.

The lawsuit contends that without an actual monetary fine for not having health insurance, the mandate should be considered illegal under the rationale used by Chief Justice John Roberts to uphold the law in the famous 2012 lawsuit.

Roberts had said that Congress could not order people to buy insurance, but that it could impose a tax penalty on them for not having insurance, which allowed the mandate and the rest of the law to stand and take effect. Without the financial penalty, repealed in the tax bill, the Republican-led states argued the requirement to buy insurance cannot legally stand. Because the mandate is so crucial to Obamacare, they continued, the whole law should be found unconstitutional too.

Usually, a presidential administration defends the current law, but the Trump administration took a different tack, agreeing with the conservative states that the mandate and, with it, the law’s rules that prohibit insurers from denying people health insurance or charging them higher rates should now be found unconstitutional. This argument does lean in part on the Obama administration’s own position at the time of the 2012 lawsuit, when federal attorneys said that if the Supreme Court found the mandate unconstitutional, then those insurance rules could be invalidated but the rest of the law should remain.

Like the Obama administration before it, Trump’s Justice Department lawyers told the court that the rest of the law could stand, including the law’s massive expansion of Medicaid to millions of the nation’s poorest citizens, even if the mandate and the insurance reforms fell.

If the Trump administration’s argument were to prevail, insurers could once again be able to flat-out deny Americans insurance based on their health status. No amount of federal subsidies would protect them. Medicaid expansion would remain, but the private insurance market would no longer guarantee coverage to every American.

There is a certain superficial logic to Texas’s case: Roberts upheld the mandate as a tax in 2012; the mandate “tax” no longer exists after the Republican tax bill was passed; ergo, the mandate can no longer be considered constitutional as a tax.

But I spoke with both a liberal and a libertarian legal scholar on Friday who said that as a matter of law, that argument is “absurd” and “ludicrous.”

The whole case turns on the complicated legal concept of “severability”: If one provision in a law is invalidated by a court, can the rest of it stand without it? Texas is arguing that the individual mandate is so central to Obamacare that if it is unconstitutional, then the rest of the law is too.

Courts usually decide that question by looking at Congress’s intent — and that’s where the conservative case falls apart.

It is actually quite simple, legal scholars say: Congress passed a law, the tax legislation, repealing the individual mandate and leaving the insurance protections in place. So, clearly, Congress intended in the tax bill to eliminate the mandate penalty while keeping the ACA’s insurance reforms. That is exactly what the tax law they just passed does.

She isn’t the only one who thinks so. Jonathan Adler, a libertarian legal scholar who has supported prior legal challenges to Obamacare, shared the same view.

He described it like a math problem. Yes, Congress A passed the mandate and the insurance reforms together, to work together. But Congress B just repealed the mandate and kept the insurance rules. Congress revises its laws all the time, and the most recent revision is the proper way to understand how Congress intends the law to work. And with that understanding, the new conservative argument doesn’t hold up.

“Because Congress A claimed this provision (as originally enacted) was an essential component to the broader scheme, plaintiffs claim this still applies to the subsequent revision (even though Congress B didn’t say so), and thereby want the whole statute to go down. That’s just absurd,” he said by email.

(It should be noted, too, that several career federal attorneys withdrew from the case shortly before the Trump administration filed its brief, suggesting they were extraordinarily uncomfortable with the legal argument being presented.)

Texas has filed the lawsuit in a very conservative federal district court and, as we’ve seen before, lawsuits challenging Obamacare that appear weak on their face have found purchase with conservative jurists before.

But for the reasons outlined above, it doesn’t appear this case should go anywhere. We’ll have to wait to see whether that holds up.