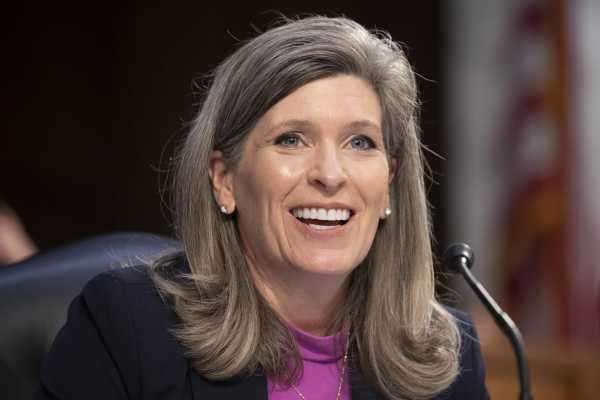 In the middle of an unexpectedly close reelection fight, Iowa Sen. Joni Ernst could have used a strong night at a virtual debate Thursday against Democratic challenger Theresa Greenfield. Instead, she bungled a question that her opponent said an Iowa senator should know the answer to.

It started when Greenfield correctly answered a question about the “break-even” price of corn — it’s going for about $3.68 per bushel, she said, and at that price, there might be some farmers who are meeting their production costs. Then the moderator asked Ernst a similar question about the break-even price of soybeans. Ernst answered $5.50, well below the actual price of $10.05. She then complained to the moderator that Greenfield had not been posed the same question.

Greenfield immediately seized on the moment, tweeting that Ernst “should know the price of soybeans.”

The clip quickly blew up on social media, even with most of the political sphere talking about the presidential candidates’ dueling town halls.

The question may have seemed gimmicky to some, but as NBC News political correspondent Sahil Kapur noted, familiarity with local agricultural concerns has been important to Iowa voters in the past. And six years after winning an eight-point victory to secure her first term in the US Senate, Ernst — once viewed as a rising star in the Republican Party — needs those voters.

Both Ernst and Greenfield grew up on farms. Ernst spent 22 years in the Iowa Army National Guard and served in the Iowa State Senate from 2011 to 2014 before being elected to the US Senate, replacing retiring Sen. Tom Harkin.

Greenfield, meanwhile, has never held elected office. After putting herself through college, she has worked as an urban planner and real estate developer in Iowa. But she’s been polling neck-and-neck with the incumbent Ernst, sometimes even a few points ahead.

Democrats, however, appear to have some momentum there now. Before the 2018 midterm elections, Republicans held three of the four US House seats in Iowa, but two of those changed hands in the last cycle. Abby Finkenauer flipped the First District, which covers the northeastern part of the state and includes Cedar Rapids, and Cindy Axne did the same in the Third District, which covers the southwestern part of the state and the capital city of Des Moines.

As Vox’s Dylan Scott explained, Iowa, which is 91 percent white, appeared to be moving permanently to the right after Republican success there in 2014 and 2016. But the more urban and suburban parts of Iowa are growing, which could pose problems for both Ernst and Trump. And Thursday didn’t help. As one Democratic strategist had previously told Scott: