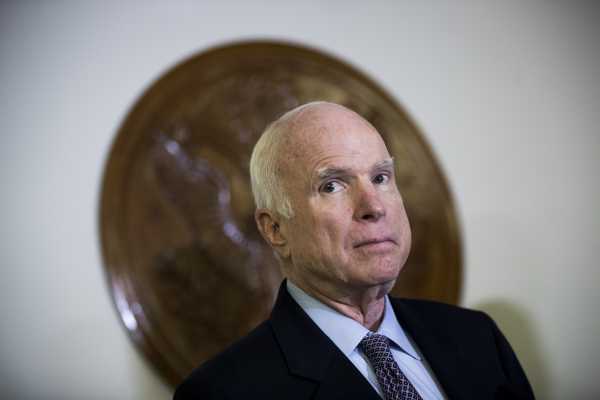 Trump blasted Canadian Prime Minister Justin Trudeau this weekend for being “meek and mild,” defending his administration’s recent decision to impose steel and aluminum tariffs against Canada and other US allies.

But McCain wanted to make it clear that American lawmakers do not stand with Trump’s trade policy.

He wasn’t the only lawmaker to tweet critical statements of Trump this weekend. Sen. Jeff Flake (R-AZ) said, “this is not who we are,” after Trump and his advisers made headlines for mucking up relationships with longtime US allies over trade policy.

Trump’s tweets came at the end of two days of very tense negotiations between the US and its closest allies at the annual G7 summit with Western allies in Quebec. As Vox’s Zeeshan Aleem explained, the G7 summit is usually “marked by near consensus on issues like free trade.”

Trump was always going to be a wild card at the G7 summit. His administration announced substantial tariff hikes on aluminum and steel imports from the European Union, Mexico, and Canada in the weeks leading to the meeting — a position that has increased the prospects of a trade war. Canada is already considering retaliatory tariffs.

Trade has proven particularly divisive within the GOP under Trump. Republicans are known for being the party of free trade, and it’s rankling those who typically try to steer clear of Trump scandals.

Sasse has long been critical of Trump’s protectionism. When Trump announced tariffs against China, the senator said in a statement, “hopefully the president is just blowing off steam again but, if he’s even half-serious this is nuts.” He also called the administration’s proposal the “dumbest possible way” to hold China accountable.

Meanwhile, Maine Republican Sen. Susan Collins made an effort to maintain her border state’s relationship with Canada, tweeting that the US “must preserve this friendship” with the country.

And last week, Sen. Bob Corker (R-TN) joined forces with Democrats to push for a bipartisan piece of legislation that would limit Trump’s abilities to impose tariffs without congressional approval. Still, most Republicans in Congress fear crossing the president and pushing forward with any actual legislation.

Whether this anger will result in any policy remains to be seen, but it’s clear Trump has fewer and fewer allies in Congress on this issue.