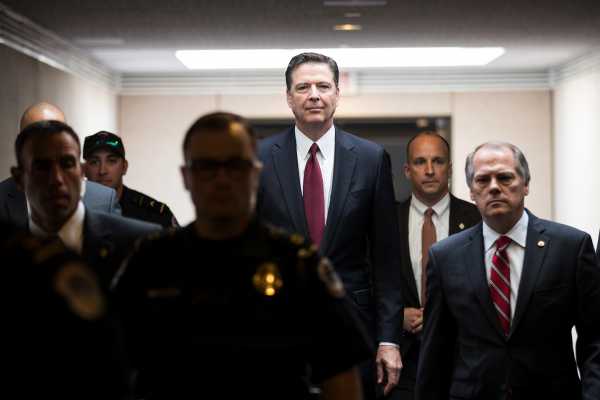 The Justice Department’s inspector general report on the FBI’s activities ahead of the 2016 election and then-FBI Director James Comey’s conduct contains some pretty tough criticism. It says Comey “clearly and dramatically” departed from FBI norms in the Hillary Clinton email investigation and made a “serious error of judgment” in sending a letter to Congress just days before the election letting them know he was reopening the probe.

He penned an op-ed in the New York Times published just after the document came out saying he doesn’t agree with all of the inspector general’s conclusions, but he respects them. And he thinks the report was good, even if it doesn’t cast him in the best light.

“All of our leaders need to understand that accountability and transparency are essential to the functioning of our democracy, even when it involves criticism,” Comey wrote. “This is how the process is supposed to work.”

What did Comey say about the IG report?

The former FBI director laid out two arguments for why the report, put together by Justice Department Inspector General Michael Horowitz, is important.

One, he notes that investigators found no evidence of bias or improper motivation that affected the investigation into Clinton’s emails. While Comey might have mishandled the probe, he didn’t do so because of politically motivated animus toward one side or another. (The report determined that texts between affair-having FBI officials Peter Strzok and Lisa Page did have political bias, but there’s no evidence that “improper considerations” affected their investigative actions.) Comey also says the report “resoundingly demonstrates that there was no prosecutable case” against Clinton.

Two, Comey says that the report is “vital in shedding light for future leaders on the nature and quality of our investigation and the decisions we made.” In other words, it will serve as a guidepost for what to do — and, perhaps, not do. From the op-ed:

Comey isn’t apologizing for his behavior

Comey has publicly admitted to having a big ego and said he may have played a role in his management of the investigation into President Trump and the Clinton probe. That comes off in his op-ed: While he says he accepts the inspector general’s findings, he’s careful to point out that he doesn’t agree with some of its points, and he’s not apologizing.

“The inspector general weighs it differently, and that’s OK, even though I respectfully disagree,” he wrote.

In his memoir, A Higher Loyalty, Comey wrote that he’s “sorry” Clinton felt anger toward him and that he “couldn’t do a better job explaining to her and her supporters why I made the decisions I made.” In an interview with ABC News’s George Stephanopoulos after the book’s release, he said he doesn’t regret the decisions he made. He is, however, sorry about his Ryan Seacrest-esque buildup announcement that he wasn’t recommending charges against Clinton in July 2016, causing “all kinds of confusion and pain,” and the fact that he “was involved at all.”

In the Times op-ed, Comey points out that he encouraged the review of the FBI’s actions when he was still the bureau’s director and “wanted a second set of eyes” on the “agonizing decisions” he and his team made in the 2016 campaign. Even if the inspector general disagreed, Comey wrote he was “confident” that the report “would find the FBI team made them without regard for political favor or partisanship.”

He says he hopes it will be a lesson for the future.