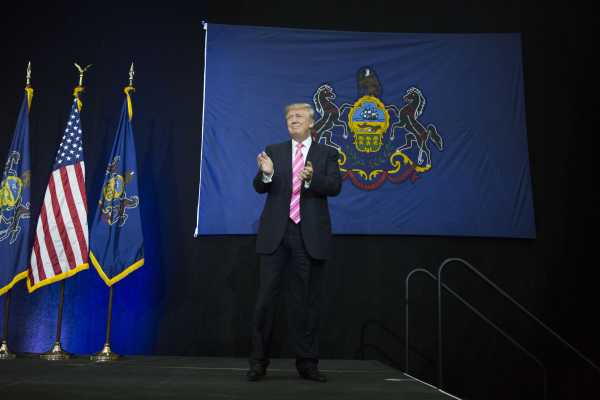 Of all the surprises on election night 2016, Pennsylvania might have outdone everybody else. The state, where Hillary Clinton had been leading by as much as 10 points late in the fall, voted for Donald Trump — by less than a percentage point. It was a fatal blow to Clinton’s candidacy and an upending of a long-held conventional wisdom.

One man had — sort of — seen it coming: Brandon Finnigan, who oversees election coverage for Decision Desk HQ and who even self-deprecatingly calls himself Brandon “Pennsylvania” Finnigan in his email signature. Finnigan, whom I spoke by phone with recently, was writing in 2015 and even years before that the political intelligentsia had it wrong: Pennsylvania was more winnable than anybody on the GOP side except for him seemed to realize.

He saw demographics that he thought, someday, with the right Republican and the right — or wrong — Democrat could turn the state red. “The largest bloc of voters in the state were whites without a college degree,” Finnigan says. “However people want to interpret it, Clinton’s campaign failed with those voters, absolutely bombed with those voters.”

Trump, of all people, proved him right. Now the Keystone State will play another major role in the 2018 elections: Sen. Bob Casey is one of 10 Senate Democrats running in a state Trump won. Meanwhile, Democratic Gov. Tom Wolf is trying to hold on to his seat in what could be pivotal for redistricting in 2020. A monumental elections lawsuit, in which the state’s high court invalidated its gerrymandered congressional districts, could blow the state’s House races wide open.

Democrats have reason to feel good about Pennsylvania in 2018, with Trump’s abysmal approval ratings, the natural momentum for minority parties in a midterm year, and that big court case that just swung in their favor. Finnigan is a bit more measured. “They’re looking at Trump’s approval ratings right now, they’re looking at generic ballots, they’re thinking, ‘Well, we’ve got this made. That state is going to fall right back in line.’ Well, it’s not guaranteed.”

I asked Finnigan how he looks back at the 2016 election now that he has some distance from it, and what he expects from America’s hottest new swing state going forward.

This transcript has been edited for clarity and length.

I was reading some of your old pieces and some interviews you’ve done in the last couple years. The one thing I could not quite figure out is the origin story for your interest in Pennsylvania. Where did this obsession come from?

As Republicans were losing ground in the suburbs around Philadelphia, a lot of people started using two phrases that drive me nuts. One was “the white whale”; this is a pursuit by people who are just wasting money from a party and it’s a lost cause that’s just going to drown them in the end. The other phrase that I hate is Charlie Brown and Lucy’s football. It looks tempting and then it’s yanked away.

Well, no. It’s never being yanked away. Either the candidates that ran weren’t a good fit or the party wasn’t doing what it needed to do to actually win the state. I am a Republican, so it kept frustrating me watching this happen over and over again.

What drove me into a serious interest in this was that was way too simplistic. There’s a far more nuanced approach to looking at Pennsylvania, which involves looking at it by township level or precinct level and realizing there really aren’t 100 percent suburban and 100 percent white blue-collar areas in the state, as much as people may think there is.

I divide the state roughly into the Acela corridor, which is the Philadelphia suburbs, and — I know it’s inaccurate — Appalachia. But even within those areas, there are dramatic differences per party, county by county, town by town.

So to force you to be as simplistic as possible, how would describe your grand unified theory of Pennsylvania that had the state on your radar for so long?

The largest bloc of voters in the state were whites without a college degree. There was an overestimation of how many voters with college degrees actually live in the state. It was a fatal miscalculation by Clinton, because she simply assumed all of those voters would show up and get her turnout through the roof.

You’re talking about those areas that are dotted like blue islands throughout the state combined with the Philadelphia metro area versus everything else, the vast landscape of area that is mostly populated by whites without a college degree.

Those particular voters were always a problem for Republicans. They weren’t solidly Republican in the North. South of the Mason-Dixon line, of course, they were, but north of the Mason-Dixon line, Barack Obama won election in 2008 and won reelection again, and he won a considerable share of those voters. He didn’t win 20 or 30 percent of them. He probably got into the 40s in some of these states with those voters. These are the Joe Biden Democrats. They might occasionally vote Republican because of social issues, but they have an allegiance to the Democratic Party. They’re prevalent also in Wisconsin, Michigan, and Minnesota.

Well, that cracked last year. However people want to interpret it, Clinton’s campaign failed with those voters, absolutely bombed with those voters. It’s simply a matter of math: There’s more of them in Pennsylvania than college-educated voters. Because of that, Trump was able to get insanely high margins in these areas.

With some distance from 2016, did Trump skip a few steps ahead in an evolution that had been underway for years, and we’ve established a new normal for Pennsylvania? Or is it more likely that he’s an aberration and other Republicans might struggle to reconstruct his coalition?

If you look at Pennsylvania as a state that was always on the cusp but people just didn’t realize it, it’s transforming into a state that’s just on the cusp of every election. Because if you look at Senate races there, governor races, congressional races, no party dominates the other. It’s not a state that is blue. Besides the presidency, it’s not a blue state. It was purple; it always was purple.

I think its presidential results more closely mirrored the nature of the state, [which] showed these bizarre divisions and reflected its real nature for the first time. You had a Republican candidate who committed a sustained campaign in the state. You did not have that with Mitt Romney; Romney jumped in toward the end. John McCain jumped in toward the end as a Hail Mary. It’s not a state you can treat as a Hail Mary — it’s a state you have to be in and visit constantly. He did that.

It’s a state where the red flags were there. For Clinton, the red flags were there if you looked at the primary results. There was a constant pattern among white non-college-dominated areas. She just collapsed from where she was against Obama. Hundreds of thousands of voters just didn’t show up this time. That should have been a gigantic red flag.

They spent almost all their energy in Philadelphia and Pittsburgh. It failed, because there isn’t enough people in those two communities.

Projecting forward, what are our fundamentals and what are the variables that will determine the outcome of the future?

A lot of that is going to come from how the parties recruit and how the parties conduct their campaigns. If you’re running a Trump-style campaign in Pennsylvania, you can definitely pull it off outside of Philadelphia and outside of Pittsburgh, but it won’t play very well there.

A pre-2016 Republican suburbanite congressional campaign works fine and didn’t break down. Sen. Pat Toomey (R-PA) did perfectly well. He won Chester County. He won Bucks County. His margins weren’t terrible Montgomery or Delaware County. But he trailed Trump in a lot of the rural parts of the state.

There’s plenty of voters who are up for grabs now. We don’t know yet. There’s one presidential election where the state went red. We don’t know how it’s going to go in 2020.

If anything’s changed, it’s just that Pennsylvania finally got the spot that it should have always had, now that you’ve actually had a Republican campaign there in Pennsylvania. That is the difference. The last time there was a sustained Republican campaign was in 2004, and George W. Bush lost it by 2 percentage points. That’s not a dark blue state.

You’ve talked about what Trump did right, what Clinton did wrong. If you were advising Democrats in Pennsylvania, what do they have to do there to win now?

They’re gonna have to take the approach they did when they were targeting the suburban voters, but they will have to divide their time away from the suburbs and into these areas that they have waned in. Places like Luzerne County. The shift in Luzerne County still amazes me, two years on. It’s incredible how far to the right that county swung.

They could learn lessons from their statewide candidates. They won a lot of the territory that Clinton lost. Just see how they did it there, how they were able to connect and resonate with those voters without abandoning your pursuit to run up the score in the suburbs and the cities.

You have to do both. There’s this bizarre idea that you can only pick one. No. You can’t just pick one. There are trade-offs, and a winning coalition for a party can change over time. But there’s still members of different segments that you’re going to grab. The efforts in Pennsylvania are going to have to be a lot more diffuse this time around if they’re going to have a shot of flipping the state back.

Now they’re looking at Trump’s approval ratings right now, they’re looking at generic ballots, they’re thinking, “Well, we’ve got this made. That state is going to fall right back in line.” Well, it’s not guaranteed. It’s not set in stone. We’re just getting into 2018. The presidential election is well over two years away.