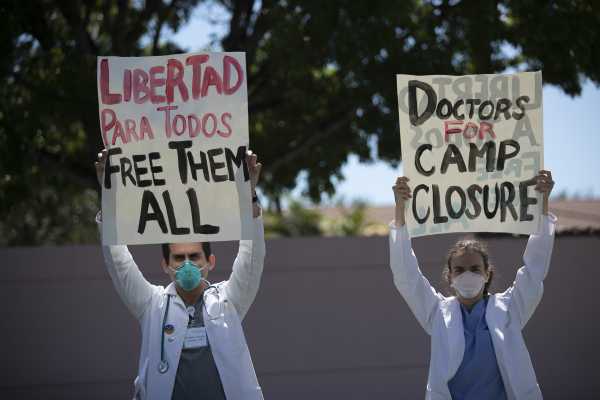 A nurse at a US Immigration and Customs Enforcement detention facility in Ocilla, Georgia, claimed in a whistleblower complaint published Monday that female detainees have been subjected to a troublingly high number of hysterectomies while in custody.

The complaint was filed by a nurse, Dawn Wooten, in cooperation with a coalition of immigrant rights groups led by Project South, a nonprofit activist group.

The complaint accuses the Irwin County Detention Center, operated by the private prison contractor LaSalle Corrections detention center, of a litany of health and safety violations. But its most explosive claim is that immigrant women held there are subjected to hysterectomies, which it says are performed unusually frequently.

The detainees, many of whom have limited English skills, were allegedly sent to a gynecologist outside the facility who performed the hysterectomies, often without them fully understanding why they were getting the procedure done. One woman was told it was because she had a “thick womb” or “heavy bleeding,” even though she had never experienced heavy bleeding or been told by a doctor previously that she had a thick womb, according to the complaint.

“Several immigrant women” have told Project South about the hysterectomies, the complaint says. One woman, who is not named in the complaint, told the nonprofit that she talked to five immigrants who had the procedure done between October and December 2019.

Wooten, who is named in the complaint, said the frequency of hysterectomies has raised concerns for her and other nurses: “We’ve questioned among ourselves, like, goodness he’s taking everybody’s stuff out. … That’s his specialty, he’s the uterus collector.”

The doctor is not named in the complaint. Project South says it has identified the gynecologist but has decided not to release his name publicly yet, Azadeh Shahshahani, the organization’s legal and advocacy director, told Vox.

ICE spokesperson Lindsay Williams said in a statement that the agency does not comment on complaints like Wooten’s that are filed with the Department of Homeland Security’s Office of the Inspector General (OIG), a government watchdog. “ICE takes all allegations seriously and defers to the OIG regarding any potential investigation and/or results,” Williams said.

“That said, in general, anonymous, unproven allegations, made without any fact-checkable specifics, should be treated with the appropriate skepticism they deserve,” Williams.

A spokesperson for LaSalle did not immediately respond to a request for comment Tuesday.

Shahshahani said that Project South’s next step is to issue a letter to Congress along with the Government Accountability Project. In the meantime, the organization and its partners are “demanding that people be freed immediately and that the facility be shut down,” she said.

It’s not the first time that Project South has raised concerns about human rights abuses at Irwin, which can hold around 1,200 detainees: A report released by the organization in 2017 found that the center wasn’t feeding detainees enough and serving them spoiled food, as well as paying them less than $1 a day to do voluntary work that helped them pay for more food and phone access, which was prohibitively expensive. Detention Watch Network has similarly raised concerns about the health and safety of detainees at Irwin.

While the complaint filed Monday concerns a single detention center, it reflects a broader pattern of abuses that occur in immigration detention, particularly in facilities operated by private prison contractors. The federal government received more than 1,200 sexual abuse complaints from adult detainees between 2010 and 2017 and more than 4,500 such complaints from unaccompanied children between 2014 and 2018. And amid the pandemic, immigrants across the US have been fighting for their release from ICE detention, alleging insufficient measures to protect them from the coronavirus.

The complaint questions whether the hysterectomies were medically necessary

Several members of Congress have already expressed horror at the complaint, including Rep. Veronica Escobar (D-TX) and Sen. Jacky Rosen (D-NV), who called for an immediate investigation:

On Tuesday morning, Rep. Bennie Thompson (D-MS), chair of the House Committee on Homeland Security, announced that the committee would examine the allegations in the complaint as part of an ongoing investigation concerning conditions at ICE detention facilities run by private contractors.

“The allegations put forth in this whistleblower complaint point to an alarming pattern of unsafe conditions and a lack of oversight at privately-run ICE facilities,” he said in a statement. “The complaint alleging hysterectomies have been performed on women held in detention without consent is incredibly disturbing.”

The complaint raises questions about whether the detainees who had hysterectomies could give informed consent, given that they did not speak English and the detention center did not always use translators to communicate. Wooten said that nurses would typically try to get another detainee to interpret for them in Spanish or communicate with the detainees by searching for terms online instead of using an official translator through the phone, as typically required.

One detained immigrant, who was not named in the complaint, told Project South that when she asked what treatment she was receiving before she was subjected to a hysterectomy, she was given different answers by three different people: a doctor, a corrections officer transporting her to the hospital, and a nurse at the detention center. (It’s not clear whether she had help from a translator in communicating with them or whether she was sufficiently English-proficient to understand them.)

Another unnamed detainee told Project South that, in speaking to the women who had hysterectomies, they were “confused when explaining why they had one done” and appeared to be “trying to tell themselves that it’s going to be OK.”

“When I met all these women who had had surgeries, I thought this was an experimental concentration camp. It was like they’re experimenting with our bodies,” she said.

It’s not clear whether the hysterectomies were medically necessary. A spokesperson for the American College of Obstetricians and Gynecologists referred Vox to its resources on hysterectomies, which say that they can be commonly used to treat noncancerous growths in the uterus that contribute to heavy periods and painful sex, as well as endometriosis (a disorder in which tissue that is supposed to line the uterus also grows outside the uterus), pelvic support issues, abnormal uterine bleedings, chronic pelvic pain, and gynecologic cancers.

However, the organization also advises that, depending on a patient’s condition and comfort level, they may “want to try other options first that do not involve surgery” or see if the condition improves on its own first, waiting to have a hysterectomy until after they no longer want to bear children.

Wooten, the nurse, said in the complaint that while the procedure might have been necessary for some women experiencing heavy menstrual bleeding or other severe issues, “everybody’s uterus cannot be that bad.”

One woman, Wooten said, was supposed to have a single ovary removed, but the gynecologist accidentally took out the wrong one and then gave her a total hysterectomy.

“She still wanted children — so she has to go back home now and tell her husband that she can’t bear kids … she said she was not all the way out under anesthesia and heard him tell the nurse that he took the wrong ovary,” Wooten said.