A press conference held this afternoon by Gov. David Ige, D-HI, and other Hawaii officials provided more answers, including the release of the investigation and personnel actions from the Hawaii emergency management agency (HI-EMA) internal investigation, which is now complete.

The employee who sent the alert was terminated on Friday, according to officials, and has a history of confusing drill with real-world events. Other employees said he was confused and froze during the ordeal. Another employee then took over.

The investigation found at least two previous incidents in 10 years with that employee during which he confused a drill with a real-world situation. Other co-workers said they didn’t feel comfortable working with him and did not think he could do his job.

Two more employees have resigned, including the administrator of HI-EMA; a third employee will be suspended without pay, an official said at the press conference.

Two midnight shift supervisors were off in the hallway when the alert went off. While one of the supervisors called in the message issuing the test message, the other should have been at the state warning point, and not the hallway, the official said.

It was confusing who was in charge of the alert due to the shift change, officials said. The midnight shift supervisor who called in the alert has not been disciplined.

The employees’ names will not be revealed until the appeal for the disciplinary action is complete.

One of the burning questions this report sought to answer was why it took almost 40 minutes for the alert to be corrected. One reason for the delay, according to the report, is that employees believed they had to contact FEMA before issuing another alert. According to the timeline in the state report they did not reach FEMA until 8:30 a.m., more than 20 minutes after the initial alert went out.

Ajit Pai, chairman of the Federal Communications Commission, said “many things went wrong in Hawaii” in a statement after the FCC report was released this morning. So far, the federal investigation has found that Hawaii’s Emergency Management Agency, HI-EMA, didn’t have “reasonable safeguards in place to prevent human error from resulting in the transmission of a false alert,” and if a false alert did go out, “didn’t have a plan for what to do,” Pai said.

HI-EMA has since put new policies in place including a new computer that can retract a false alert quickly and a new rule requiring two people to verify that a message is being completed.

The FCC has also reported that the employee who mistakenly sent out the mobile alert is refusing to cooperate in its investigation. At a hearing on Capitol Hill last week, Lisa Fowlkes, the head of the Public Safety and Homeland Security Bureau at the FCC, said the federal agency is pleased with the cooperation from leadership in Hawaii, but disappointed in the refusal from the key employee. While questions remain, the FCC and state reports detail the timeline of the chaotic 38 minutes after the alert, described as follows.

At 8:05 a.m. on Jan.13, HI-EMA began a “no-notice ballistic missile defense drill” during a shift change from overnight to dayside officers.

The recording “[did] not follow the script contained in HI-EMA’s standard operating procedure for this drill,” the report states.

Then, within two minutes, according to the report, a dayside officer on the receiving end of the drill selected a template for a live alert and sent it out — even approving a prompt of: “Are you sure that you want to send this Alert?”

According to the report, other officers knew and understood that it was a drill, but the officer who sent the alert “claimed to believe, in a written statement provided to HI-EMA, that this was a real emergency, not a drill.”

At 8:07 a.m. employees received alerts on their personal smartphones and called the state warning point to confirm the alert was false. 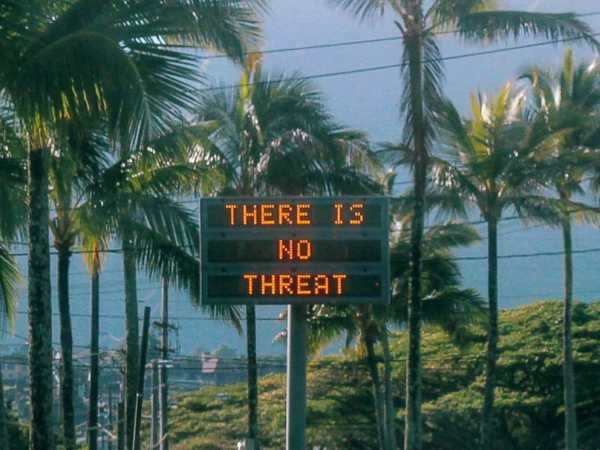 Instagram/@sighpoutshrug via ReutersAn electronic sign reads “There is no threat” in Oahu, Hawaii, after a false emergency alert that said a ballistic missile was headed for Hawaii, in this Jan. 13, 2018 photo obtained from social media.

The governor of Hawaii was alerted within five minutes, followed by the U.S. Pacific Command and then the Honolulu Police Department, the FCC report states.

At 8:12 a.m. the employee who issued the alert was told to send a message canceling the alert but didn’t respond, with other employees saying that he “seemed confused.” Another employee took control of that employee’s mouse and sent the cancel message.

Between 8:13 a.m. and 8:30 a.m. employees notified news outlets and emergency management agencies and posted on social media accounts that there was no threat but did not initiate another alert about the false alert until 8:32 a.m., after an employee reached FEMA.

It wasn’t until 8:45 a.m., 38 minutes after the first alert, that HI-EMA issued a correction on the wireless emergency alert system in the same way it dispatched it at the beginning of the false threat.

“In general terms, there was a lot of public outreach happening at that time through various means,” said Lt. Col. Charles Anthony of the Hawaii Department of Defense, which includes HI-EMA. 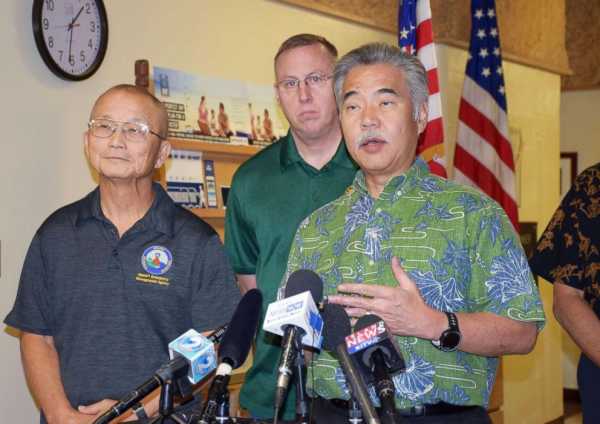 Kyodo/NewscomHawaii Gov. David Ige, right, speaks to reporters in Honolulu on Jan. 13, 2018, after a false alert about an incoming ballistic missile was sent out to residents across the state by the Emergency Management Agency.

The outreach included social media and broadcast media, depending on how well-staffed the newsrooms were on that Saturday morning, Anthony said.

All of the major broadcast stations were reached by 8:22 a.m., Anthony said — 23 minutes before the cell phone alerts rescinding the threat went out.

The FCC investigation is still ongoing.

“Federal, state, and local officials must work together to prevent such a false alert from happening again,” the FCC report states.