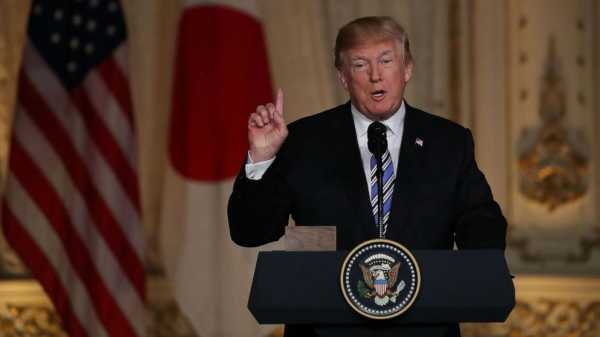 The DNC alleges a wide-ranging “Russia-Trump conspiracy” and relies on the same racketeering statutes have been employed in taking down the mob.

“The conspiracy constituted an act of previously unimaginable treachery: the campaign of the presidential nominee of a major party in league with a hostile foreign power to bolster its own chance to win the Presidency,” the lawsuit alleges.

The defendants in the case include both Russian nationals and prominent figures in the Trump campaign, including the president’s son, Donald Trump Jr., his son-in-law, Jared Kushner, and his one-time campaign chairman, Paul Manafort. Several of those named, like Manafort, have been charged by special counsel Robert Mueller. Democrats said they have written a first draft of what they undoubtedly hope criminal prosecutors will find.

The president is not named personally, but his campaign is one of the defendants.

“This is a sham lawsuit about a bogus Russian collusion claim filed by a desperate, dysfunctional, and nearly insolvent Democratic Party,” Brad Parscale, the Trump campaign manager, who in a statement described the lawsuit as a ploy to grab attention and raise money. “They’ve sunk to a new low to raise money, especially among small donors who have abandoned them,” he said.

Representatives for Trump Jr. have not responded to request for comment.

A spokesperson for Manafort declined to comment as did a spokesman for Kushner.

ABC News has reached out to the other individuals named in the suit for whom the network has contacts and many either declined to comment or did not immediately respond.

Scott Balber, an attorney for a billionaire Russian developer and his son, Aras and Emin Agalarov, both named in the suit, called it “plainly frivolous.”

“My clients had absolutely nothing to do with any alleged hacking of DNC computer networks or any effort to influence the US election,” Balber said. “The complaint appears to be nothing more than a publicity stunt.”

The Democratic party, which is seeking both financial damages and an admission of responsibility in the case, alleged widespread harm caused by the hack. That included disruption of the party’s activities during the height of the campaign, and also gave rise to “frightening and sometimes life-threatening harassment.”

“On July 23, 2016, multiple DNC employees received an email stating: ‘I hope all your children get raped and murdered. I hope your family knows nothing but suffering, torture, and death,’” the lawsuit says.

The lawsuit opens the door to discovery and depositions of many of the central players from the Trump campaign who have been alleged to be involved in attempting to make maximum political use of hacked DNC emails.

The complaint alleges that the Russia federation along with WikiLeaks and senior Trump campaign officials worked to disseminate hacked material to disrupt the DNC’s efforts to campaign and ultimately undermine the American public’s ability to receive their message. The suit specifically names Roger Stone, a longtime partisan operative and close friend of Trump’s, as someone who knew about the Russian hack of the Clinton campaign chairman before the public.

Stone, who has not responded for calls seeking comment, denied that allegation directly in an interview with ABC News last week.

“I had no advance notice of the source or the content or the exact timing of the WikiLeaks disclosures,” he said. “I never received anything from Assange or WikiLeaks or the Russians or anyone else, including allegedly hacked e-mails and therefore never passed anything onto Donald Trump or the Trump campaign. Those are the facts.”

The DNC case appears to rely almost exclusively on publicly available information, painting a portrait of the extent of the connections between Russians and Trump associates.

“Russia hacked our democracy. This is not some tin hat conspiracy,” said Jane Kleeb, a DNC member and Chair of the Nebraska Democratic Party.

The suit names the Russian intelligence services as a defendant. Cohen, Milstein, Sellers and Toll, the law firm handling the matter for the DNC has a background in suing foreign countries.

The DNC and its legal team have not been in touch with Mueller’s team, but sources with the party told ABC News they believe their civil case can proceed on a parallel track to the Special Counsel’s.

“I do believe this lawsuit has the potential for more discovery in terms of how they went about the hacking, about how they went spreading the information,” said Donna Brazile, who led the Democratic party in the latter stages of the 2016 campaign.

Brazile said she had urged Perez to file the case and was relieved that he moved forward with it, saying she wanted the courts to “make sure those involved in the hacking are brought to justice.”