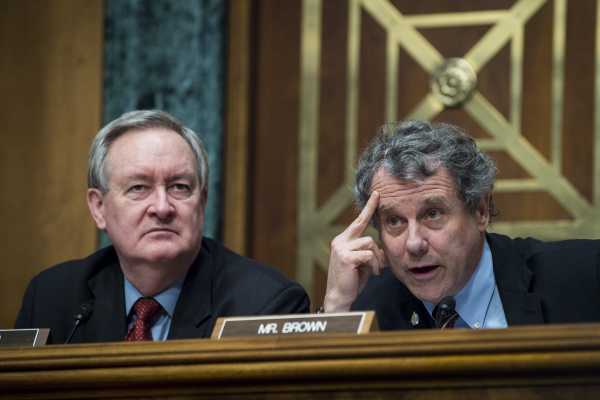 Republicans and Democrats in Congress have finally found something they can agree on, and it’s not immigration, gun control, or health care. It’s easing some rules for banks.

The House of Representatives is expected to vote on Tuesday on legislation passed by the Senate in March that would rewrite parts of the 2010 Dodd-Frank Act, the landmark financial regulation overhaul enacted in response to the 2008 financial crisis. The bill, sponsored by Senate Banking Committee Chair Mike Crapo (R-ID), cleared the Senate with ease, 67 to 31, earning support from 16 Democrats and Sen. Angus King (I-ME) in addition to 50 Republicans. It’s expected to clear the House as well, and it’s not yet clear which Democrats, if any, might support it there.

The bill, if passed, would be one of the most significant rewrites of financial industry rules in nearly a decade. It would lessen regulatory scrutiny on smaller banks, including regional banks like BB&T, SunTrust Banks, Key Bank, and American Express, as well as community banks and credit unions.

The bill’s proponents say it’s an example of bipartisanship at its best. But progressives say it goes too far and that it purports to help small community banks when its changes really benefit large financial institutions.

And the bill has exposed fault lines within the Democratic Party: Progressives and many 2020 presidential hopefuls in the Senate have lined up against the legislation, while some moderates and those from rural states support it and seek to hold it up as an example of their ability to work in a bipartisan manner.

The Dodd-Frank bill, which was passed in 2010 in response to the financial crisis, aimed to decrease various risks across the financial system and increase regulatory oversight to prevent such a meltdown from happening again. Republicans have wanted to unravel Dodd-Frank essentially since it became law, and President Donald Trump vowed to “do a big number” on it soon after taking office.

At the core of the new bill — the Economic Growth, Regulatory Relief, and Consumer Protection Act — is the assumption that the Dodd-Frank financial overhaul was overly aggressive and harmed smaller banks.

One provision of the new bill would raise the threshold at which banks are subject to certain federal oversight, including stress tests that measure a bank’s ability to withstand an economic downturn. If a bank fails a stress test, the Federal Reserve curbs its ability to return money to shareholders via dividends and stock buybacks and requires it to shore up its capital reserves. Under current law, banks with assets of $50 billion or more are considered systematically important financial institutions (often referred to as SIFIs) and are therefore subject to stricter oversight from the Federal Reserve.

The Senate bill would increase the threshold to $250 billion. Banks with assets of less than $100 billion would be freed of current oversight requirements, and those between $100 billion and $250 billion would no longer be subject to tougher rules after 18 months, although the Fed could determine periodic stress tests and other tailored oversight measures. That would free up a lot of regional banks from the heightened regulatory scrutiny they face today, including BB&T, SunTrust Banks, Key Bank, and American Express. The bill could affect about two dozen banks in total.

A number of regulators and lawmakers on both sides of the aisle have said that Dodd-Frank’s $50 billion threshold should have been set higher. Former Federal Reserve governor Daniel Tarullo, a Democrat, said in his “departing thoughts” in April 2017 that the $50 billion cutoff was “too low.” Even Barney Frank, the former Massachusetts Democratic representative who helped craft Dodd-Frank, has admitted that the $50 billion number was a “mistake.”

But the new $250 billion threshold has raised some eyebrows. In a recent CNBC op-ed, Frank said that were he still in Congress, he would vote against the bill because of the $250 billion mark. (He has suggested a threshold in the $125 billion range.)

He pointed out that the failure of two or three such institutions would put us in “Lehman Brothers territory,” referring to the investment bank that filed for bankruptcy in September 2008, precipitating the financial crisis. Countrywide Financial, one of the country’s largest subprime mortgage lenders that was at the center of the 2008 mortgage crisis, had assets in the $210 billion range before it failed.

But the bill’s proponents say banks in the $100 billion to $250 billion range won’t be off the hook entirely. They’ll still face periodic stress tests, and the Fed can enact enhanced supervision if it wants.

Federal Reserve Chair Jerome Powell said during his nomination hearing before the Senate Banking Committee in November 2017 that he would continue to have “meaningful” stress tests for banks in that range. In a hearing last week, he said the bill gives the Fed “the tools that we need” to apply enhanced standards to banks in the $100 to $250 billion range.

But exactly what those enhanced standards would be, or whether the Fed would actually apply them, is unclear.

Frank also criticized a provision in the bill that he said weakens anti-discrimination standards in housing by raising the number of loans a bank can make before it’s required to report on the issue. Another provision that he singled out allows foreign megabanks, such as Deutsche Bank and HSBC, to put their American assets into a separate holding company to avoid US regulatory scrutiny.

What sort of relief big foreign banks would get from the bill has been up for debate. A fact sheet put together by moderate Democrats backing the bill says such institutions will still be subject to stress-test requirements. Powell, in a Senate Banking Committee hearing last week, said he doesn’t think the bill would weaken supervision for foreign banks when asked about the matter by Sen. Sherrod Brown (D-OH). But Treasury Secretary Steven Mnuchin in a January hearing told Brown that he believed the Senate bill would lighten foreign bank regulations.

Community banks and credit unions have smaller volumes of business than Wall Street firms and derive most of their funds and lending operations in the local areas where they operate. Those backing the Crapo bill say its main purpose is to relieve community banks and credit unions — generally those with $10 billion or less in assets — from some of Dodd-Frank’s requirements that may be onerous for smaller institutions.

Tarullo, the former Fed governor, said in November that “the fact that community banks are subject at all to some of the Dodd-Frank Act rules seems unnecessary to protect safety and soundness, and quite burdensome on the very limited compliance capabilities of these small banks.”

Paul Merski, who heads congressional relations at the Independent Community Bankers of America, an industry group, said the bill relaxes rules on mortgage lending in particular. The legislation would deem certain mortgages held by lenders with $10 billion and under “qualified mortgages,” which would allow small banks and credit unions to expand the types of mortgages they offer. It also eases appraisal requirements on certain mortgage loans and exempts small banks from certain

The bill also exempts small banks from the Volcker Rule, which prohibits them from making certain kinds of speculative investments with their customers’ money. And it adjusts leverage ratios — the measure of a bank’s financial sustainability — for such entities.

Proponents of the legislation note that the number of community banks in the United States is dwindling, an important issue for rural communities. Community banks are four times more likely to operate in rural counties than larger institutions, according to a study from the FDIC.

Critics, however, say that exempting small banks from certain requirements is risky and could be harmful to consumers. The progressive Center for American Progress said the bill’s elimination of escrow requirements for banks under $10 billion removes an “essential borrower protection.” It also criticized the qualified mortgage loan change as a dramatic expansion that “gives lenders a major safe harbor for nontraditional underwriting practices reminiscent of those that caused the crisis.”

It is also worth noting that community banks aren’t exactly suffering financially: According to the FDIC, community banks reported increases in net income from the year before in every quarter of 2017.

Chris Krueger, an analyst at the investment research firm Cowen, said in a note to investors last week that it’s not yet clear exactly how much relief the bill will ultimately provide. “While the cost and burden of the post-crisis regulatory response will be less for the regional banks, it is not disappearing,” he wrote.

Beyond asset threshold adjustments and community bank relief, the bill also throws in some marginal consumer protection provisions. It includes free credit freeze and year-long fraud alerts, largely a response to last year’s Equifax data breach, and some new protections for veterans, seniors, and members of the military.

Sen. Elizabeth Warren (D-MA) in an email to supporters last week, per BuzzFeed, slammed her colleagues over the legislation. “Republicans AND Democrats are gutting the rules on Wall Street,” she declared.

Lobbying groups have upped efforts to influence the bill. “There are many different interests in financial services that are looking at this and saying, ‘Oh my God, there’s finally going to be reform to Dodd-Frank that may move, let me throw in this issue and this issue,” Sen. Chris Coons (D-DE), a co-sponsor of the bill, told the Intercept. “There are a dozen different players who decided this is the last bus out of town.”

The Financial Times pointed out that banks that stand to benefit from the legislation — namely, those with assets within sight of the $50 billion range — appear to have increased donations to Senate Democrats who support the bill. Individuals connected to Signature Bank, a regional bank, have donated $112,000 to senators so far in the 2017-’18 election cycle, eight times as much as during the entire 2015-’16 election cycle. Sens. Heidi Heitkamp (D-ND) and Joe Donnelly (D-IN), two of the bill’s co-sponsors, have been the biggest recipients of the Signature-linked Democratic donations.

Ian Katz, an analyst at the Washington research firm Capital Alpha Partners, told me it’s possible the Crapo bill could introduce some risk, as certain banks will now get less supervision, but the scenario won’t be dire. “It doesn’t look to me like it introduces new significant risk into the system,” he said.

And to be sure, the largest entities — JPMorgan Chase, Bank of America, Goldman Sachs — will generally be subject to most of the same regulations they face today if the bill is passed. The Consumer Financial Protection Bureau, one of the key components of the Dodd-Frank bill, will remain intact. Former Rep. Frank in November 2017 wrote that “well over 90 percent” of Dodd-Frank would be unchanged.

Given where many progressives feared banking deregulation would go a year ago, when Trump signed a directive ordering the restructuring of Dodd-Frank, the Crapo bill could have been much worse. House Republicans are expected to take up a second set of more aggressive bank relief bills once the current legislation is passed, but it’s unlikely they’ll get very far in the Senate.

As Katz pointed out, “I honestly think that if Democrats broadly were told a year ago that this would be the extent of what Trump had referred to as ‘doing a number’ on Dodd-Frank, they would probably take this deal.”