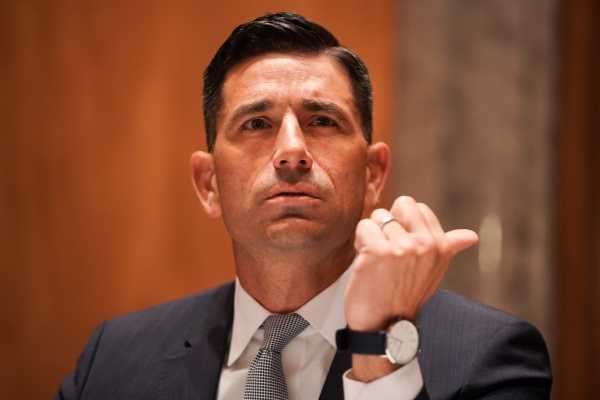 Acting Homeland Security Secretary Chad Wolf announced his resignation Monday, joining a long line of Trump administration officials who have stepped down since the president’s supporters stormed the US Capitol building last week.

Wolf — who has served in the position since November 2019 and become the public face of President Donald Trump’s immigration policies — had been planning to remain in his post until President-elect Joe Biden was inaugurated on January 20. He had been overseeing security measures for the inauguration, and announced Monday that he was extending the “national special security event” period, a designation that facilitates cooperation among federal law enforcement agencies to respond to terrorist or other criminal threats.

But he reportedly told agency staff later on Monday that ongoing legal challenges to his appointment to the position had precluded him from staying on.

“Unfortunately, this action is warranted by recent events, including the ongoing and meritless court rulings regarding the validity of my authority as Acting Secretary,” he told agency staff, according to the New York Times. “These events and concerns increasingly serve to divert attention and resources away from the important work of the Department in this critical time of a transition of power.”

Though Wolf has frequently gone to bat for the president in the media, reportedly becoming his favorite homeland security secretary, Wolf had publicly urged Trump to strongly condemn last week’s violence.

“This is unacceptable. These violent actions are unconscionable, and I implore the President and all elected officials to strongly condemn the violence,” he said in a statement on Thursday. “Any appearance of inciting violence by an elected official goes against who we are as Americans. Every American is guaranteed the right to peacefully protest, but once those protests become violent, we should enforce our laws and bring those responsible to justice — regardless of political motivations.”

But his resignation did not appear to be directly tied to last week’s events. Rather, he cited several court rulings that he was unlawfully appointed to his position. Judges found that Trump had sidestepped the Senate confirmation process to install him, running afoul of the Federal Vacancies Reform Act. Trump had attempted to rectify the issues with Wolf’s appointment by formally nominating him for the position but abruptly withdrew the nomination from the Senate last Thursday.

With Wolf continuing to serve in his position without legal authority, his legacy has come into question. One court already invalidated his memo halting new applications to the Deferred Action for Childhood Arrivals program on the basis of his illegitimate appointment.

There is no telling whether further legal challenges could invalidate other DHS policies promulgated under Wolf’s watch — or even whether the incoming Biden administration could argue that Wolf’s appointment was unlawful in order to refrain from enforcing agency policies that it opposes.

Wolf and his deputy Ken Cuccinelli were at the forefront of Trump’s “law and order” messaging over the summer and have been staunch defenders of the president’s restrictionist immigration policies.

Wolf led the crackdown against Black Lives Matter protests in Portland, Oregon, sending federal agents from Immigration and Customs Enforcement and Customs and Border Protection there on the premise of protecting federal buildings that had been vandalized. The agents later drew criticism for escalating tensions by using tear gas on crowds and detaining protesters in unmarked vehicles.

And in the final weeks before the presidential election, he and Cuccinelli went on a tour of several battleground states — Pennsylvania, Arizona, Minnesota, and Texas — holding at least five press conferences to showcase Trump’s immigration policies. Some of the press conferences concerned routine enforcement actions that would typically be publicized with a simple press release.

Wolf made the border wall a prop in the agency’s public messaging. After racing to finish the border wall in the months leading up to the election, he has been eager to claim that Trump made good on his campaign vow. (Some 500 miles of wall have been completed, but Mexico never paid for it — rather, that $15 billion burden fell on taxpayers and largely was transferred from the Pentagon’s budget.)

Wolf traveled to the border on October 29 to tout the progress on construction, making abundantly clear what he thought was at stake in the presidential election. He said that Biden’s policies would create a surge of migration at the border and pose a threat to national security.

“Let me be clear, each of those policies would endanger the lives of the border patrol and Americans across the country,” he said.

He also tweeted out a video jabbing at journalists who cast doubt on whether Trump would complete the border wall and whether it would even serve its intended purpose of “securing the border.” It’s not clear whether the video was produced by the Department of Homeland Security, but it might as well have been a campaign ad:

David Lapan, a former spokesperson for DHS, called it a “misuse of [government] resources” and “clear electioneering.”

The announcement of Wolf’s resignation comes just before Trump’s planned trip to the US-Mexico border on Tuesday, where he is expected to again tout his legacy on immigration.