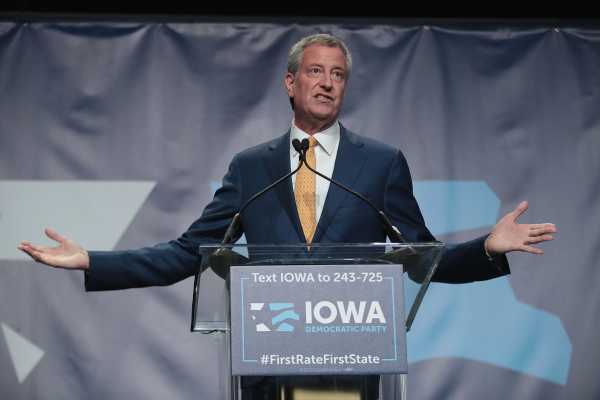 New York City Mayor Bill de Blasio’s presidential bid hasn’t been the best-received campaign in a crowded Democratic field, but he’s sticking with it — and hoping he can change the narrative (and polling) around his run.

De Blasio, 58, launched his presidential candidacy on May 16, making him one of the last candidates to throw his hat into the 2020 ring. In a video announcing his bid, he touted his record as one that put working people first and promised to continue doing so as president. “As president, I will take on the wealthy. I will take on the big corporations. I will not rest until this government serves working people,” he said.

The mayor has a long history in New York politics and a decent progressive record. He campaigned for former New York City Mayor David Dinkins in the late 1980s and worked in his administration, served as a regional director for the Department of Housing and Urban Development during the Clinton administration, and managed Hillary Clinton’s Senate campaign. He served on the New York City Council from 2002 until he became the city’s public advocate in 2010. He was in that role until he became mayor.

His mayoral record includes establishing universal pre-K and expanded paid sick leave. In early 2019, after Amazon canceled plans to build a second headquarters in Long Island City in response to community pushback, de Blasio slammed the e-commerce giant for scrapping the agreement instead of addressing citizens’ concerns. He called the decision an example of “the 1 percent dictating to everyone else.” (De Blasio initially courted Amazon, and many progressives viewed his comments on the company’s flip as an attempt to appeal to the left.) On his website, de Blasio claims to have reduced the practice of stop-and-frisk by the New York City Police Department by 93 percent and says he helped reduce crime to record lows.

Despite all that, he’s not getting much traction in the 2020 field: According to a RealClearPolitics average of polls, he averages just 0.3 percent support nationally. He made it onto the June Democratic debate stage by the skin of his teeth.

But the mayor seems to believe that once people get to know him, he’ll grow on them. “The poll that actually matters is the election,” he said in an interview on Good Morning America the day he announced his 2020 bid, noting he has twice been elected mayor in New York.

De Blasio has also been aggressive in calling out fellow New Yorker President Donald Trump, and has tried to make his nickname for Trump, “Con Don,” a thing, to mixed results. “Right now, the federal government is not on the side of working people,” de Blasio said on GMA. “And that’s because Donald Trump is playing a big con on America.”

As mentioned, de Blasio has spent most of his career in New York City politics, but that doesn’t mean he’s particularly popular among New Yorkers, especially when it comes to whether he should run for the White House. (To be fair, he is the mayor of the largest city in the United States. By contrast, Pete Buttigieg, whose stature has risen in the polls and who has been the subject of fawning media coverage, is the mayor of the fourth-largest city in Indiana.)

Politico in March quoted a former aide calling the idea of a 2020 de Blasio campaign “fucking insane.” A Quinnipiac University poll found that 76 percent of New York City voters don’t think de Blasio should run. His job approval in the city is 42 to 44 percent, but it varies significantly among demographics: 66 percent of black voters approve of the job he is doing as mayor and 23 percent disapprove, compared to 31 percent of white voters who approve of de Blasio and 58 percent who disapprove. Hispanic voters are evenly divided.

Among residents of New York state, de Blasio’s net favorability rating is ahead of Trump’s, but barely.

De Blasio told Politico that he believes he embodies economic populism and that his mayoral election was “an indicator of the gathering storm that came forth nationally” for Sen. Bernie Sanders’s (I-VT) 2016 campaign. (Sanders, of course, will now be his opponent.) He has long championed the sort of progressive platforms Sanders embraces: In 2014, for example, he launched an initiative to enroll 4-year-old children in universal pre-K, and the program has about 70,000 students. He has sought to expand the program to 3-year-olds but has faced challenges in doing so.

He also highlighted to Politico a number of his achievements as mayor that he believes make him an appealing candidate to a wide swath of voters, including high employment, increased graduation rates, and low crime. But as Politico notes, grading de Blasio’s record is complicated:

De Blasio has also seen some controversy in his time as mayor, some transgressions more serious than others.

The mayor insists on working out at a YMCA gym in Park Slope, Brooklyn. The 11-mile trip, which he undertakes in a private car accompanied by a police escort from Gracie Mansion on the Upper East Side, where he resides, has earned him scrutiny and mockery in New York. It seems like he’s trying to show he’s authentic by continuing to work out at a neighborhood gym, but ultimately the decision seems a little contrived — not to mention it’s not particularly environmentally friendly or considerate of anyone else who might be commuting along the same path. Despite criticism, De Blasio has kept up his routine. Also, during a Groundhog Day ceremony in 2014, de Blasio dropped the animal. A week later, it died of internal injuries.

There is also a trail of occasionally ethically dubious choices de Blasio has made regarding campaign finance and questionable characters he’s been tied to. A former fundraiser for de Blasio was convicted of conspiring to bribe NYPD officials. Another campaign donor pleaded guilty to trying to bribe de Blasio to get favorable lease terms for a restaurant he owned in Queens. And New York City’s Department of Investigation found de Blasio violated conflict of interest rules in soliciting donations from people seeking favors, according to a recent report from the City.

In 2017, federal and state prosecutors declined to bring criminal charges against de Blasio and his aides after probes into his campaign fundraising practices.

Ahead of de Blasio’s campaign launch, the New York Times editorial board questioned the ethics of his campaign fundraising tactics. “The field of candidates seeking the Democratic nomination is already large. If Mr. de Blasio chooses to run, he will have to find a way to assure voters that he has their interests — not those of his big donors — at heart,” the board wrote.

De Blasio is doing it his way

De Blasio’s presidential campaign hasn’t been smooth sailing. He has thus far struggled in the polls and failed to gain traction with many voters. In a June Iowa poll, he received zero percent support, though he did get the backing of a New York hotel union that same month.

But the mayor is trucking on. He has traveled to early primary states and weighed in on big issues that are part of his 2020 pitch. De Blasio has called on Congress to begin impeachment hearings for Trump and said he believes the government should go “a lot farther” than the Affordable Care Act in establishing universal health care at the federal level. He has yet to roll out any major policy proposals as part of his presidential bid.

He has leaned heavily on his New York record in trying to reach out to candidates — and also gone after Trump.

“I know something about Donald Trump that’s different from the other candidates, because I have watched him for decades,” de Blasio said on CNN’s State of the Union in June. “I understand his game plan. I understand his tricks and his strategies. And I do get under his skin.”

It’s not clear whether that’s true — Trump did tweet about de Blasio’s run the day he announced it, but de Blasio’s attempt to cast the president as #ConDon (which, in Spanish, means condom) hasn’t really taken off.

While most Democratic candidates are avoiding direct criticism of one another, de Blasio also pointedly criticized former Vice President Joe Biden in June after Biden spoke about working with segregationist senators in the past.

Despite his polling, de Blasio has made it clear he has no plans to abandon his campaign.

“I was the underdog in everything I’ve been near, and I’m not saying that with any hubris,” he told the New York Daily News before announcing his run. “Any time I get in a race, I get in it to win.”