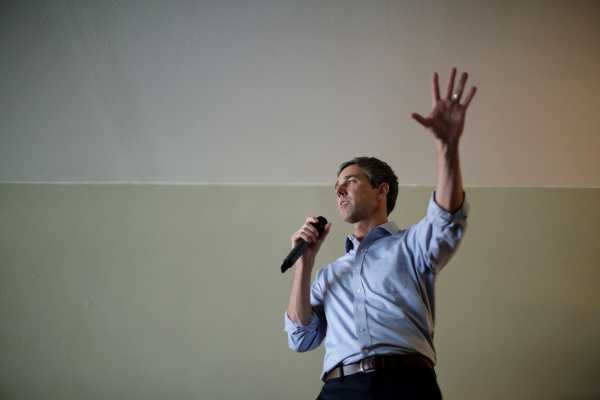 The Democrats running for president have increasingly come around on marijuana legalization in time for the 2020 campaigns. But while many of the candidates have only just recently shifted to supporting legalization, at least one candidate was an early backer: Beto O’Rourke.

In fact, the first time O’Rourke drew national headlines, when he was still a City Council member in El Paso, Texas, was due to his support for marijuana legalization. Back in 2009, O’Rourke sponsored a resolution in the City Council that called for “an honest, open national debate on ending the prohibition of narcotics.”

During the controversy that followed, O’Rourke called the war on drugs a “complete failure.” Citing increasing drug war-related deaths in neighboring Ciudad Juárez, Mexico, he argued that ending prohibition — and legalizing marijuana — could weaken drug cartels, reducing death and violence: “If our drug laws were different, I will absolutely guarantee you that our body count would be different.”

The resolution unanimously passed the El Paso City Council, 8-0. But Mayor John Cook vetoed it. Then, Rep. Silvestre Reyes (D-TX) lobbied El Paso City Council members to vote against overriding the veto — warning it could cost the city federal funds as Congress worked on “an economic stimulus package in which El Paso stands to benefit.”

The threat worked, getting enough council members to back off so that the City Council couldn’t override the mayor’s veto.

But O’Rourke stood his ground, voting to override the veto. In 2011, O’Rourke and fellow council member Susie Byrd published a book, Dealing Death and Drugs: The Big Business of Dope in the U.S. and Mexico, detailing their support for legalizing marijuana. And in 2012, O’Rourke challenged Reyes in the Democratic primary.

During the campaign, Reyes tried to use O’Rourke’s support for marijuana legalization against him — running an ad claiming, “Legalizing drugs is not the answer. Even our children understand that.” O’Rourke went on to win the primary and later the general election, and he supported several marijuana policy reform bills as a House representative.

The politics of marijuana legalization have changed a lot in the 10 years since O’Rourke first sponsored the El Paso resolution. At the time, President Barack Obama opposed marijuana legalization, and even though Congress was controlled by Democrats, the city was still worried about the potential backlash from a resolution merely calling for debate on the issue.

But O’Rourke’s stance has been more consistently in-line with Democrats nationwide. Based on Gallup’s polls, a majority of Democrats have backed legalization since as early as 2009. 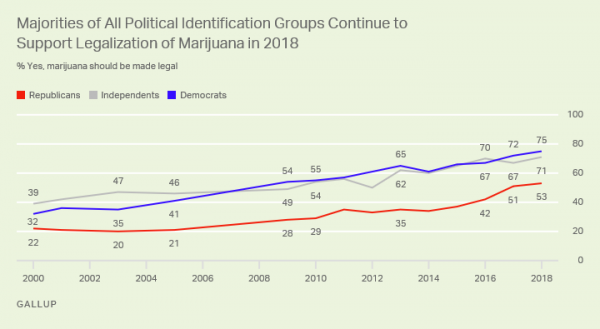 In 2012, Colorado and Washington state became the first two states to legalize marijuana.

In 2016, Hillary Clinton only voiced support for letting states legalize — a similar position to then-candidate Donald Trump’s stance. (In 2017, O’Rourke criticized “hiding behind this baloney states’ rights defense,” advocating instead for “making the tough but important decision to federally end the prohibition on marijuana.”)

The 2020 Democratic field is overwhelmingly in favor of marijuana legalization, but some 2020 candidates, such as Sens. Elizabeth Warren (D-MA) and Kamala Harris (D-CA), have only in recent years started to back it explicitly.

The last time Gallup polled the issue, in 2018, 75 percent of Democrats backed legalization.

The issue came up last year, during O’Rourke’s failed bid against Sen. Ted Cruz (R-TX). In one debate exchange, Cruz said “it would be a profound mistake to legalize all narcotics and I think it would hurt the children of this country.” O’Rourke clarified that he only wants to legalize marijuana, not “heroin and cocaine and fentanyl.” (Fentanyl, a synthetic opioid, is already legal for medical uses, but it’s increasingly supplanted heroin in the black market in parts of the country.)

Marijuana could become an issue in the general election against Trump, whose administration rescinded Obama-era memos that shielded state-legal pot shops and growers from a federal crackdown.

Based on O’Rourke’s decade-long record on this issue, his administration would take a very different approach to marijuana.