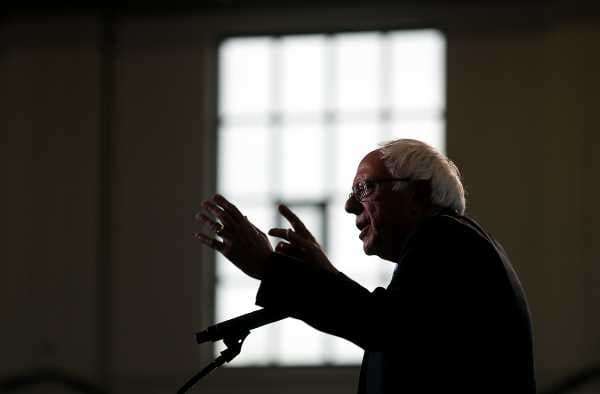 Father’s Day at the Sanders household could be awkward. Sen. Bernie Sanders (I-VT) is publicly keeping a distance from his son Levi Sanders’s congressional campaign in New Hampshire. The senator declined to endorse his son when Levi announced his candidacy in February, and he’s still staying out of it; he says it’s for the sake of avoiding “dynasty politics.”

The younger Sanders, 49, is one of multiple Democrats and Republicans running to replace outgoing Democratic Rep. Carol Shea-Porter in representing New Hampshire’s First District. He has styled himself after his father, with his campaign website calling for a system that “represents the 99 percent and not the 1 percent who have never had it so good.”

But whatever Levi Sanders is putting down, Bernie Sanders is not picking up — at least not enough to endorse his only son. When contacted by the Boston Globe about Levi Sanders’s candidacy this week, Bernie provided a statement highlighting his support for a higher minimum wage, infrastructure spending, and free public education. As to whether voters should cast their ballots for him, he wouldn’t say.

“Levi has spent his life in service to low income and working families, and I am very proud of all that he has done,” Sanders said. “In our family, however, we do not believe in dynastic politics. Levi is running his own campaign in his own way.”

In an interview with CNN’s Chris Cuomo on Thursday, Sanders echoed the sentiment. “I don’t believe in dynastic politics,” he said. “He’s on his own. He’s going to speak to the people of New Hampshire, and I’m sure he’s going to do very well.”

Sen. Sanders offered a similarly tepid statement when Levi announced his candidacy, saying, “The decision as to who to vote for will be determined by the people of New Hampshire’s first district, and nobody else.”

Levi Sanders is Bernie Sanders’s son with his ex-girlfriend Susan Campbell Mott. He is his only biological child.

The senator appears on Levi’s campaign website, but what you see is his back as he walks away. Levi’s Twitter photo is an image of him and his father taking a mirror selfie together.

Bernie Sanders is a popular figure in New Hampshire. He won the 2016 Democratic presidential primary there by a wide margin, bringing in 60 percent of the vote compared to Hillary Clinton’s 38 percent. Among potential 2020 presidential candidates, he polls well, even though in a recent poll he’s not the leader.

There are two ways to read his lack of public enthusiasm for his son’s campaign: He really means what he says and thinks dynasty politics is bad, or he’s not particularly impressed with Levi as a candidate.

His shyness on his son could be what he says. He probably doesn’t want the Sanders clan to wind up like the Clintons, Kennedys, Bushes, or Trumps. But Levi Sanders isn’t the ideal congressional candidate, either, and perhaps the senator doesn’t want to be damaged by tying himself too much to his son should he decide to run for president again in 2020.

Levi Sanders doesn’t live in the district he’s running to represent, and while that’s not required, it doesn’t help his cause. He resides in Claremont, in New Hampshire’s Second District, which is about an hour away. Whereas his father excelled in fundraising, Levi has struggled, ending March with just under $11,500 on the books. He’s picked up two endorsements — from New Jersey Gov. Phil Murphy and California Rep. Ro Khanna — but not his dad’s.

Vox’s Dylan Matthews, who has a full explainer on Levi Sanders, pointed out that some of the candidate’s past social media activity also raises some questions. On Twitter, he has criticized “identity politics” and said criticisms of “white privilege” turn off working-class voters. He tweeted he didn’t think “working-class families” would care about President Donald Trump using a racial slur and complained that eliminating Confederate flag license plates “hurts people’s rights.”

The tweets are still there.