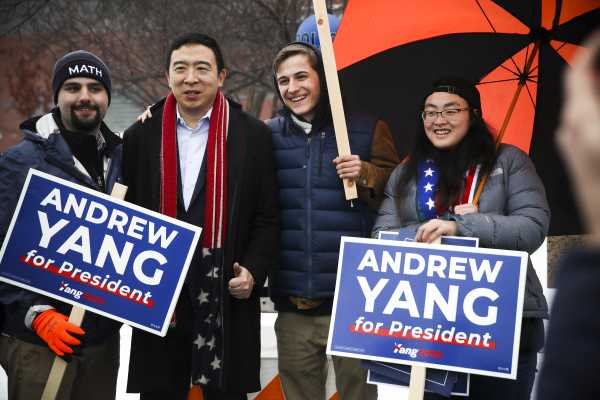 Andrew Yang, the entrepreneur whose advocacy for a $1,000-a-month universal basic income (UBI) to all adult Americans catapulted him into national debates and made him a real contender for the 2020 Democratic nomination, suspended his run for the presidency before final results even came in on New Hampshire primary night.

When Yang entered the race, he was best known as a moderately successful two-time author and the founder of the nonprofit Venture for America. VFA tries to prevent elite colleges and universities from funneling graduates toward safe options (like jobs in finance, management consulting, or big law) by enlisting teams of fellows to move to cities across America and work for local startups. His second book, 2018’s The War on Normal People, laid out his plan for a “Freedom Dividend”: a $1,000-per-month check (that’s $12,000 per year) mailed to every adult American ages 18 to 64, no strings attached. It would be funded by a large new sales tax.

Yang’s long-shot 2020 bid had UBI as its centerpiece, arguing that the Freedom Dividend is a necessary response to automation-driven unemployment. “If you go to the factory in Michigan, it’s not wall-to-wall immigrants. It’s wall-to-wall robot arms and machines,” he told voters at the Democratic debate in December, the last for which he qualified.

That message gave him an enormous online following, especially after a February 2019 appearance on Joe Rogan’s massively popular podcast; the YouTube video of their interview has nearly 5 million views.

Celebrities like Dave Chappelle, Donald Glover, Ken Jeong, Nicolas Cage, and Rivers Cuomo joined the “Yang Gang,” as did tech CEOs like Elon Musk and Twitter’s Jack Dorsey. Yang’s grassroots fundraising operation was one of the best in the field, raising $16.5 million in the fourth quarter of 2019, far above more conventional candidates like Cory Booker and Amy Klobuchar.

But that considerable momentum did not translate into votes, and he finished in sixth place in Iowa and, as of this writing, sixth place in New Hampshire. After these poor performances, Yang decided to throw in the towel.

The Freedom Dividend was the core of Yang’s candidacy

Universal basic income was not the only idea motivating Yang’s run. The Yang 2020 policy page is a smorgasbord of ideas from the mainstream Democratic (Medicare-for-all, paid family leave, legal marijuana) to the Extremely Andrew Yang ($100 vouchers for all Americans to donate to nonprofits, an American Journalism Fellows program to revive local news, an American Mall Act to find new uses for shuttered shopping malls, geoengineering to fight global warming, hiring a White House psychologist to “monitor the mental health of employees serving in the executive branch”).

He also proposed siphoning off 10 percent of the military budget to “a new domestic infrastructure force called the Legion of Builders and Destroyers. The Legion would be tasked with keeping our country strong by making sure our bridges, roads, power grid, levies, dams, and infrastructure are up-to-date, sound and secure. It would also be able to clear derelict buildings and structures that cause urban blight in many of our communities and respond to natural disasters.”

But you can’t discuss Yang 2020 without discussing the Freedom Dividend. It’s a pure universal basic income, with no phaseouts for top earners or work requirements. For Americans currently benefiting from cash or cash-like programs like Social Security, disability insurance, food stamps, or Section 8 housing assistance, Yang would offer a choice between the existing welfare state and the Freedom Dividend in the hope that no one would be left worse off. 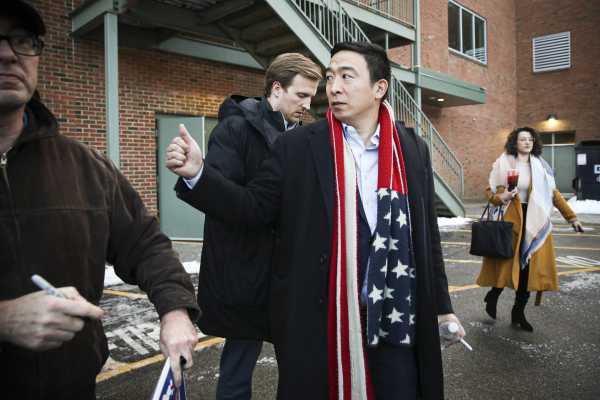 Yang, like many entrepreneurs who have become attracted to UBI, embraces the policy as a way to cope with automation. “Over 7 million Americans’ jobs, including 3.5 million driving jobs, are at risk as self-driving trucks become more viable,” he explains on his website. “The economy is not prepared to absorb the loss of so many jobs.”

“Humanity First” was among the Yang campaign’s most prominent slogans, and he framed his main financing mechanism for the Freedom Dividend — a 10 percent value-added tax (VAT) — as a way to prevent big companies like Amazon and Google from “funnel[ling] hundreds of billions in earnings overseas. VAT makes it impossible for them to benefit from the American people and infrastructure without paying their fair share.” It would, he claims, “capture the value generated by automation in a way that income taxes would not.”

This was a strange claim. VATs are basically sales taxes levied at each stage of production (when a lumber company sells wood to a paper mill, when the paper mill sells paper to Staples, when Staples sells paper to you), and as such, economists generally believe that consumers bear most or all of the cost of increased VAT rates.

But the pitch was persuasive, and it allowed Yang to rocket above more established candidates, including many senators and governors, in the primary.