Prison reform to “help former inmates who have served their time get a second chance at life.”

And a path to citizenship for 1.8 million Dreamers.

Now, maybe that’s all a just mirage, flim-flam from a skilled salesman who will never deliver.

Maybe — probably — a Republican-led Congress will gut or reject this entire list of priorities for the federal government.

Maybe Robert Mueller will make it all irrelevant.

But the fact remains that all those policies were proposed by President Donald Trump in his State of the Union address last night. They are, to varying degrees, policies that American liberals have championed for decades, policies that aim to help working-class Americans, and even reach out to those who are struggling on our society’s margins: the unemployed, the addicts, the incarcerated.

Democrats sat stone-faced through almost all of the speech. Republicans cheered nearly every line. Ronald Reagan’s America this ain’t anymore. 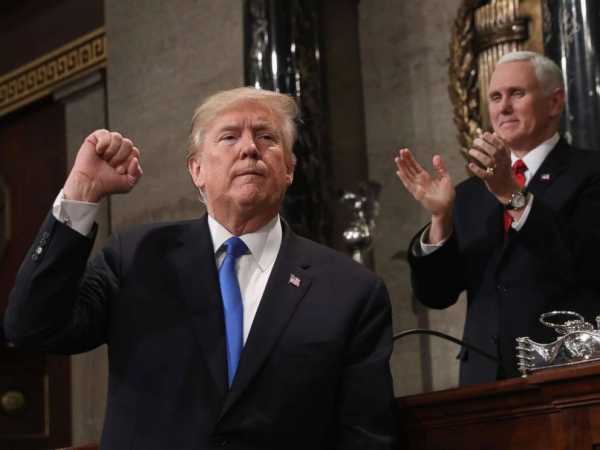 Win McNamee, Pool via Getty ImagesPresident Donald Trump gestures after his State of the Union address in the chamber of the U.S. House of Representatives in Washington, Jan. 30, 2018.

The question today is obvious, and two-sided:

Is Trump serious about all this?

And: Are the Democrats serious about all this?

Trump’s freewheeling populist nationalism — one day borrowing this idea from the right and the next day that one from the left, following his showman’s instinct, and the polls — has the potential to turn traditional Washington politics on its head, especially if he gets significant popular support for his “New American Moment” agenda. And if he can maintain focus on it.

Here, most Democrats and progressives will say: Stop. Stop being so naïve. 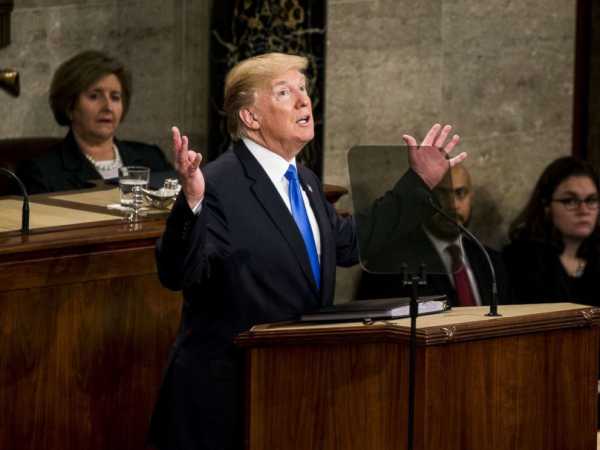 Samuel Corum/Anadolu Agency/Getty ImagesPresident Donald Trump delivers his first State of the Union address to Congress and the country in Washington, Jan. 30, 2018.

Just because he said plenty of things in that speech — it went on for an hour and 20 minutes —- doesn’t mean there was some miracle transformation of the man.

Liberals are pointing to Trump’s repeated references to the gangsters of MS-13 as an effort to demonize all immigrants as violent; to his calling out of NFL players who are protesting racial injustice in America by taking a knee during the national anthem as a dog whistle to racists; to his glee at gutting Obamacare as simply callous.

And it is always difficult to tell whether Trump actually means what he says. As all the world has learned, this is a president capable of turning on a dime and changing his positions 180 degrees in a single tweet.

Also: He offered no specifics.

Rep. Joe Kennedy urges Trump to hash out details on immigration ‘rather than throwing bombs’

But for all that, President Trump has pushed some truly progressive ideas onto the national agenda, ideas that Democrats put there first. In a sane America, this would mean the beginning of negotiations to see what might actually be accomplished.

In part that’s because Trump has shown himself to be an inconsistent, even untrustworthy, partner in passing legislation.

But the likelihood that nothing will get done on these issues is also because the Democrats have apparently decided to stake their political future on outrage and demography.

They will not deal with a man they and their base see as so vile as to be beyond the pale.

And they sense — they hope — that the rising, new American electorate of young people, minorities and women, are energized as never before and will crash over Trump and the GOP in a great, cleansing wave in the elections of 2018 and 2020.

Maybe that will happen. But if it doesn’t, and Democrats go to the voters without having at least grappled with Trump’s progressive proposals, without having tested him on his agenda, there’s a greater danger for liberals.

Donald Trump is trying to steal some bedrock progressive issues — and permanently bond them to an ultra-nationalist vision that would demolish much of the rest of the liberal agenda, on human rights, on climate change, on American leadership in the world, and much, much more.

Outrage may not be enough. It rarely is.

It may come as a surprise, but even in the age of Trump, ideas matter.