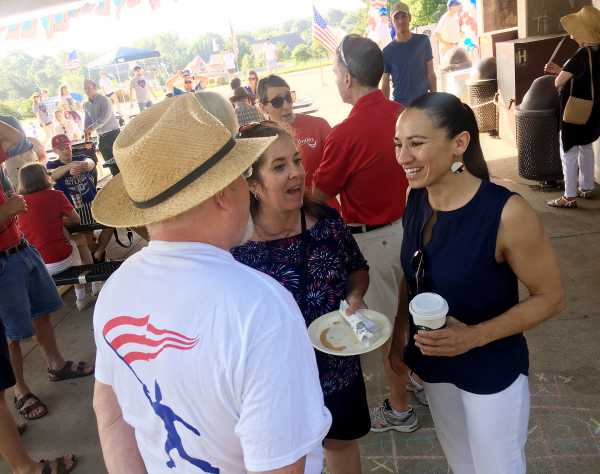 Sharice Davids, an attorney and former MMA fighter, could make history as one of two Native American women elected to Congress if she wins in November. (Democratic candidate Deb Haaland in New Mexico, who is also Native American, is likely to win in November.)

Davids edged out progressive candidate Brent Welder by a little over 2,000 votes in a competitive race that was called Wednesday morning.

Davids will face off against incumbent Republican Rep. Kevin Yoder in November. Yoder has been in office since 2011, serves on the House Appropriations Committee, and voted for Obamacare repeal and steep GOP tax cuts.

Yoder won his primary last night, but his performance wasn’t great, as Cook Political Report’s Dave Wasserman noted. Yoder took 68 percent of the vote in the GOP primary, which isn’t the surest sign of confidence for the fall; Cook is moving the race into its toss-up category.

The Democratic race in KS-03 featured a debate over what exactly the Democratic Party should look like. Welder ran to the left of Davids, touting an unabashedly progressive platform that included Medicare-for-all, debt-free college, and a $15 minimum wage. Sanders and rising progressive star Alexandria Ocasio-Cortez campaigned for Welder in the runup to Tuesday’s primary.

Kansas is thought of as a deeply red state, and indeed, much of it is. The rural, western part of Kansas is conservative and Trump-friendly. But the state gets more purple around major metropolitan areas and in eastern areas like Yoder’s district, which includes parts of Kansas City and went for Hillary Clinton in 2016 by a single point.

“I’m sure Trump is underwater there; we just don’t have district-level polling,” said Patrick Miller, a political science professor at the University of Kansas. But Miller told me he believed a more moderate approach would appeal to Kansas Democrats, rather than the bold progressivism Welder offered.

Any Democrat who wants to win will need to appeal to independents in these more educated, suburban parts of Kansas, he added.

“There’s a danger in embracing at least the symbols, if not the policy, of progressive Democrats,” Miller said. “That’s not the product that voters are looking to buy. It’s the flip side of the Rust Belt … whites with college degrees that cluster in suburbs are becoming more Democratic.”

Of course, Davids’s victory is another data point to show that 2018 is the year of the woman. Laura Kelly won the Democratic nomination for Kansas governor, and women candidates had a big night in Michigan and Missouri as well. As Vox’s Li Zhou wrote:

Davids is yet another name to add to the rapidly growing list of women candidates.