After a series of Republican-led delays and emotional protests, the Senate on Tuesday night approved a bill that will help veterans exposed to toxic burn pits — a measure President Joe Biden intends to quickly sign into law.

The Senate began voting on the PACT Act around 5 p.m., with votes on three Republican amendments before a vote on final passage of the bill, which was 86-11. None of the proposed amendments passed.

Senate Majority Leader Chuck Schumer on the floor called the passage a "wonderful moment, especially for all the people who made this happen."

Just before the legislation passed, New York Sen. Kirsten Gillibrand, who helped lead the Democratic effort, could be heard saying "I'm so proud" to Senate Veterans Affairs Committee Chairman Jon Tester of Montana. The two embraced in a hug.

"Every so often folks, America lives up to its ideals, and those are days that we savor," Schumer said at a press conference outside the Senate later Tuesday. He was joined by comedian and activist Jon Stewart, who has become the face of the legislation, and other Senate Democrats as well as GOP Sen. Jerry Moran of Kansas.

"Today, finally, at long last, America lived up to its ideals by saying to our veterans who have been exposed to toxic chemicals from burn pits, 'We have your back,'" Schumer said.

While the bill marks a major milestone for veterans' health care, Connecticut Democratic Sen. Richard Blumenthal called on the Department of Veterans Affairs to enforce the legislation properly.

"I have a message to the VA: You better get it right, you better deliver," Blumenthal said. "These veterans have waited already too long. The three days here are emblematic of what we need to avoid going forward, and the VA for too long has been part of the problem, not the solution."

Sen. Gillibrand was in tears as she celebrated the legislative victory.

Two family members of veterans instrumental in passing the legislation also shared remarks: Rossie Torres, the founder and director of Burn Pits 360; and Susan Zeier, mother-in-law of Heath Robinson, for whom the bill is named. 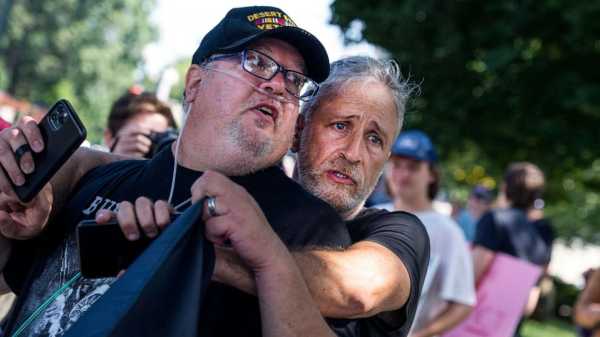 Jon Stewart hugs Tim Hauser, an Air Force veteran, at a rally to call on the Senate to pass the Pact Act, which aims to expand health care and benefits to veterans exposed to toxins while serving, outside the Capitol in Washington, Aug., 2, 2022.Tom Williams/CQ Roll Call via AP Images

"I'm not sure I've ever seen a situation where people who have already given so much had to fight so hard to get so little," he said at the Tuesday night news conference. "And I hope we learned a lesson."

He was clearly jubilant, smiling widely and embracing many of the veterans and families that stood behind the podium.

Sen. Tester said that he spoke with President Biden following the passage of the legislation "and he said, 'Thank you, this takes a big weight off of my shoulders.'"

In a separate statement, Biden said that he looked forward to signing the PACT Act, which he called "major reform" and an "important action" to meet the "sacred obligation" the U.S. has to its veterans.

The president has previously said he believed his late son, Beau, a National Guardsman, might have died of brain cancer connected to his exposure to burn pits while serving overseas.

The PACT Act had initially passed the Senate earlier this year. But after a quick fix in the House required the bill to be voted on again, 26 Republican senators changed their votes and blocked swift passage of the act last week — sparking outrage among Democrats and veterans groups. Members of the Senate vote on the PACT bill in Washington, Aug. 2, 2022.senate.gov

Stewart was the most public face leading the protest against the delay. He had joined veterans outside the Capitol for the last several days. He has also harshly criticized Republicans — who in turn cited concerns about Democratic spending maneuvers — and demanded action from lawmakers.

"America's heroes who fought in our wars outside sweating their a—- off with oxygen, battling all kinds of ailments" while Republican senators were sitting "in the air conditioning walled off from any of it," Stewart said during a press conference in front of the Capitol building on Thursday.

Stewart was also in the chamber Tuesday night for the vote, along with about 50-75 vets and supporters of the bill.

He sat above in the gallery and was seemingly overcome with emotion for a moment after the vote. He appeared to choke up while the clerk read the names of the Senators who voted yes.

When the vote was called, he grabbed his chest. "Hallelujah" and "yeah" were also shouted from observes in the gallery. 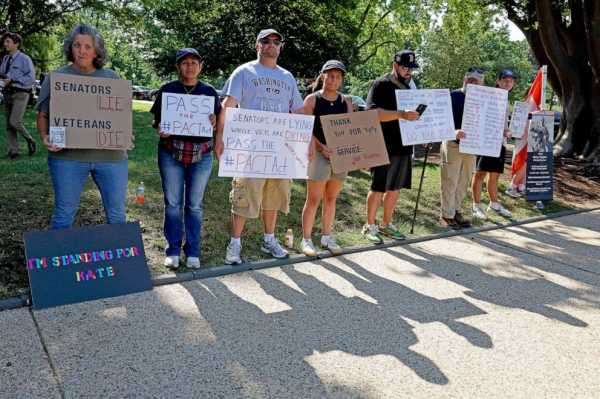 Veterans and supporters of the PACT act demonstrate outside the U.S. Capitol Building in Washington, Aug. 2, 2022.Anna Moneymaker/Getty Images

Republicans had said they did not object to the new funding for veterans in the proposal but wanted the opportunity to modify a so-called "budget gimmick" they say could be exploited by Democrats.

Sen. Pat Toomey, R-Pa., has led the GOP group in opposition, insisting on an amendment to change language in the bill that he said could free up $400 billion in existing funds already being used for veterans by shuffling the money inside the budget to use for unrelated purposes.

"What matters to a veteran whose ill because of a toxic exposure is that the money is there to cover what he needs, that's what he should be concerned about and that will be there," Toomey said Tuesday. "What I am trying to limit is the extent that they could use a budget gimmick to reclassify spending and go on an unrelated spending binge."

Republicans attempted to close this perceived budget loophole during a Tuesday night vote, but the amendment failed to pass. 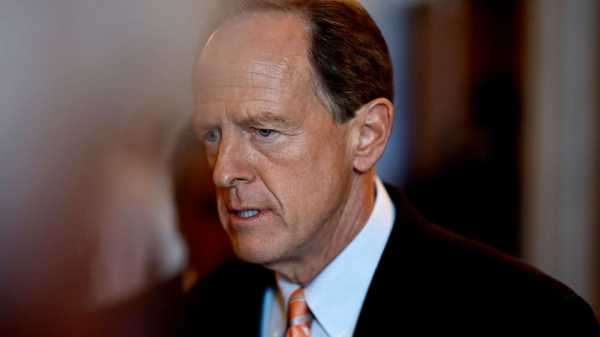 Sen. Pat Toomey walks out of the Senate Chambers during a nomination vote in the U.S. Capitol Building in Washington, Aug. 1, 2022. The U.S. Senate is scheduled to leave for August recess with action on several pieces of legislation still currently outstanding, including votes on Inflation Reduction Act of 2022, the PACT Act, and the Respect for Marriage Act.Anna Moneymaker/Getty Images

Two other amendments from Sens. Rand Paul and Marsha Blackburn also failed. Paul's amendment aimed to reduce aid to other countries besides Israel over the next 10 years to offset some of the bill's costs, while Blackburn's amendment proposed allowing toxic-exposed veterans to go directly into community care.

"Our veterans across America can breathe a sigh of relief," he said. "The treatment that they deserve and have been denied by the VA because of all kinds of legal barriers and presumptions will now be gone."