His speech was a marked difference from the bipartisan tone he sought to present two days before in his State of the Union address.

On Thursday, he rallied Republicans to elect more GOP members to Congress so they would not have to “compromise” on legislation and took a few pot shots at Democrats for sitting “stone cold” during his State of the Union remarks.

“They’d rather see us not do well than our country do great. That’s not good. We have to change that,” the president said of the Democrats.

Fact Checking the State of the Union address

The 2018 midterms will be the first national referendum on Trump’s presidency. Republicans are trying to hold on to both chambers in Congress. Democrats are hoping Trump’s ascendancy to the Oval Office will rally their base enough to give them control of at least one chamber. 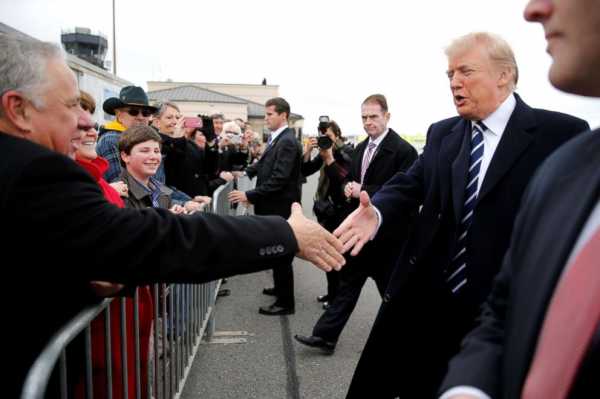 The midterms could potentially have an impact on Trump’s agenda if Democrats win and use their power to increase scrutiny on his administration.

The president expressed optimism the Republican Party could see their numbers rise in Congress after November.

He touted the same agenda items that he mentioned in his State of the Union address – jobs and the economy, infrastructure, national security, and immigration. He pointed out he has cut regulations and appointed a Supreme Court justice as accomplishments Republicans could tout on the campaign trail.

But, he reminded the crowd of GOP lawmakers, “We have to get help from the other side or we have to elect more Republicans,” he said of trying to accomplish their agenda. “We have a good chance of doing that. ‘18 is going to be very interesting.”

He added: “If we win more we don’t have to compromise so much.”

In order to win back the House, Democrats need to pick up 25 seats. Their hopes have been raised by the large number of Republicans retiring, who have resigned or running for another office – 41 by ABC News’ count – and by polling that shows voters favor the Democratic candidate on the generic congressional ballot.

It’s a harder path in the Senate. Even though the GOP only holds a two-seat majority, Democrats are defending 26 seats to the Republicans’ eight. And Trump carried 10 of those Democratic-race states in the 2016 election.

Trump kept his focus on his party in his 35 minute speech.

He called out lawmakers by name to praise them and he said that Ryan called him the other day to say he’s never seen the Republican Party as united as it is now.

“You know, Paul Ryan called me the other day, and I don’t know if I’m supposed to say this, but I will say that he said to me he has never, ever seen the Republican party so united, so much in like with each other, but literally the word united was the word he used. It’s the most united he’s ever seen the party, and I see it, too,” Trump said.

The president also mentioned his immigration plan, which he encouraged the Senate to take up.

But he appeared to be changing his tune on the Dreamers ahead of the March 5 DACA deadline and as Republicans are deeply divided over a solution.

“I’ve been hearing about DACA for so many years. Some people call it ‘Dreamers’ — it’s not ‘Dreamers.’ Don’t fall into that trap,” he said.

Not so long ago Trump claimed to “love” the Dreamers.

“We love the Dreamers,” the president told ABC’s Cecilia Vega last September. He’s also promised to treat them “with heart.”

But both Thursday’s remarks and Tuesday’s State of the Union address touched on themes and lines Republican can use as they campaign over the next 10 months, emphasizing America should come first.

“America First” was a message the president used again and again in the 2016 election. And he ended his West Virginia speech with his famous slogan from his presidential bid.

“Together, we are indeed making America great again.”