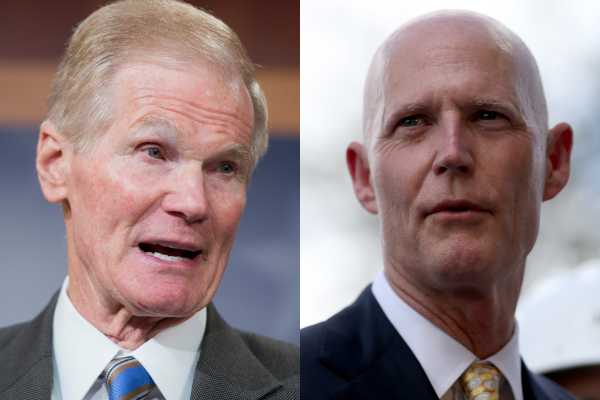 With Tuesday’s primary elections little more than a formality, the Florida Senate campaign has already hit the general-election gear — and it’s giving Democrats reason to be nervous.

Democratic Sen. Bill Nelson is facing Republican Gov. Rick Scott, one of the best recruits for Republicans in the 2018 midterm elections and a wealthy candidate whose campaign is already outspending Nelson’s by a 4-to-1 margin.

Nelson has built a reasonably strong brand, representing Florida in the Senate since 2001. Scott, meanwhile, has never won a race by more than a point in years friendlier to the GOP. But the GOP governor is still a serious threat in a state where elections are rarely decided by more than a point or two.

For now, Scott seems to hold a slim lead in the polling — and a major advantage in campaign spending, having already spent more than $27 million to Nelson’s $6 million, according to Open Secrets. Democrats are hoping the lopsided spending explains the Republican lead in the polls and can therefore be corrected as their own spending picks up in the next few months.

“Having been in the fight with Scott in the past, there is a flow to the way they campaign: they use their financial advantage to get on TV early, and Scott, to his credit, is tireless on the stump,” Steve Schale, a Democratic operative in Florida, told me. “So am I worried about Nelson? Sure, but not any more or less than any Democrat running in a competitive race here. This race was always destined to be close, it is just how Florida works these days, for better or worse.”

Florida will be one of 2018’s marquee — and probably its most expensive — Senate races. Democrats are on defense in yet another state Trump won in 2016. They can’t afford to lose any additional seats if they’re to have any hope of reclaiming the majority.

“The two biggest determinants in the Senate race are, one, resources and, two, Donald Trump,” Mac Stipanovich, a longtime Republican operative in Florida, told me earlier this year. “Either one of them can win, but my sense is that if Nelson has comparable resources then the governor is the underdog.”

Scott’s candidacy was long expected. Trump and Washington Republicans had been courting him. He is term-limited at the end of this year, after his two four-year terms as governor. He doesn’t really have anything else to do.

Rick Scott is also very, very rich, and he has shown before he’s willing to spend whatever it takes to win a statewide election in Florida.

He is worth about $150 million, according to the most recent estimates, after making his money as a hospital executive. He spent $75 million of his own money to win the 2010 gubernatorial race — his first political campaign of any kind — and another $13 million in his 2014 reelection campaign.

“With Scott, this is a guy who’s been told he can’t do something like this twice, and twice proven everybody wrong,” Schale told me. “A more conventional politician might look at national mood and think, ‘Wow, this could be really uphill.’ Scott’s view is: ‘You told me I couldn’t win the first time, and I won. Why would I listen to you now?’”

Scott’s candidacy is also important from a national perspective. Republicans theoretically have a lot of Senate pickup opportunities this year; Nelson is one of 10 Democrats up for reelection in a state that Trump won in 2016. But they have at times struggled to attract top-tier candidates. To give one example: Democratic Sen. Jon Tester, representing Montana, a state that Trump won by 21 points, is currently facing such a weak Republican field that Cook Political Report rates his race as a likely Democratic win.

The Florida governor, on the other hand, is a hardened, well-qualified, and sure to be well-funded candidate. Scott will force Democrats to take Florida seriously and to invest the necessary time and money into the race to make sure Nelson beats Scott. This race will now demand resources that Democrats otherwise could have spent defending their other more vulnerable incumbents or going on offense in states like Arizona, Nevada, or Mississippi.

Republicans currently hold a slim 51-49 advantage in the Senate. Democrats are defending seven of the 10 most competitive races this fall, and need to hold on to every seat they can — including, now, Florida, which Cook rates as a toss-up — if they want a shot at a majority.

“This is a very competitive race, and if the Democrats don’t lay out on it, they’ll lose. They are going to have to step up and help Bill Nelson,” Stipanovich said. “If Scott outspends him 2 to 1, it’s quite likely that Gov. Scott will prevail.”

Perhaps as a result, Real Clear Politics has Scott leading Nelson by 1.5 points on average in the polls, and the most recent survey put the Republican up by 6 points over the Democrat.

As for the candidates themselves, the Florida Senate race will be lacking in charisma. Schale said of his fellow Democrat Nelson: “Not a guy who’s lining up to give the keynote speech at the DNC. Not gonna break any records for his oratory skills.”

Regarding Scott, Stipanovich, the Republican operative, said: “Gov. Scott doesn’t exactly light up the stage. He’s not the most dynamic and inspiring speaker.”

I profiled Scott in 2013 for Governing magazine and came away with much the same impression:

Scott tried to turn that to his advantage in announcing his candidacy.

Nelson, meanwhile, sought to portray Scott as a political opportunist.

“While it’s clear that Rick Scott will say or do anything to get elected, I’ve always believed that if you just do the right thing, the politics will take care of itself,” he said in a statement.

They do have strengths, of course. Nelson has been elected in the state three times, after all, most recently by 13 points in 2012 — unheard of in a state where statewide elections are usually decided by a point or two. Schale praised the senator (who once famously went to space) for sticking to Florida-specific issues, like offshore drilling and Medicare for the state’s more elderly population, while mostly avoiding the high-profile spats in Washington on more contentious matters.

“Nelson does a pretty good job as well of avoiding those big fights,” Schale said. “He’s a guy who leans in really hard on issues that are important to the state.”

Scott, meanwhile, rode into office on the Tea Party wave, railing against Obamacare. He seemed for all appearances an ideologue, famously rejecting money for a high-speed rail from the Obama administration, to the chagrin of even some Republicans in his state.

But over the years, he has moderated himself. He has become almost comically on message, refusing to talk about anything except for jobs and the economy and a few other pet issues he picks every legislative session, like raises for teachers. The thrust of his 2018 campaign message is sure to be the 700,000 jobs created while he’s been governor.

“In the beginning, similar to but not the same as Trump, he had the CEO syndrome,” Stipanovich said. But “he’s gotten better at doing the job. Fewer gaffes, fewer unforced errors, more discipline.”

Most recently, after the Parkland high school shooting that killed 17 people, Scott defied the National Rifle Association and got some modest gun control measures passed in a state that had been to date one of the most gun-friendly in the country. People from both parties commended how the governor handled that crisis. “Scott was actually pretty active in that fight,” Schale said. “He was the first governor to stand up to the NRA.”

But Democrats will “make sure Nelson has everything he needs because you can’t go forward if you go backward first,” Schale said. “It’s hard to imagine a scenario where we win the Senate without winning Florida.”

Ultimately, the race is likely to be determined more by Trump.

How Donald Trump will shape the 2018 Florida Senate campaign

Trump won Florida by 100,000 votes in 2016. The state remains divided on the president: Morning Consult reported in July that 50 percent of Floridians approved of Trump and 46 percent disapproved.

Once upon a time, Scott was one of Trump’s biggest fans. He chaired a pro-Trump Super PAC, endorsed the future president in a laudatory USA Today op-ed well before most GOP politicians were doing the same, and spoke at the Republican National Convention. Trump has been one of the biggest boosters of Scott’s potential candidacy, and his administration hasn’t hesitated to bestow some favors on Scott, like rolling back an unpopular plan to allow oil drilling off the state’s shores.

Lately, Scott has tried to put a little distance between himself and the president, notably condemning Trump’s racist “shithole” comments regarding African nations and criticizing the offshore drilling plan.

“This is a conundrum faced by Republicans everywhere: Can Rick Scott get far enough away from Donald Trump to survive a competitive campaign?” Stipanovich said. “More recently, he is much less likely to embrace Trump publicly on some issue. He’ll bob and weave and obfuscate. That’s telling in itself.”

“A year ago, he could not wait to wrap himself around Donald Trump,” Stipanovich noted.