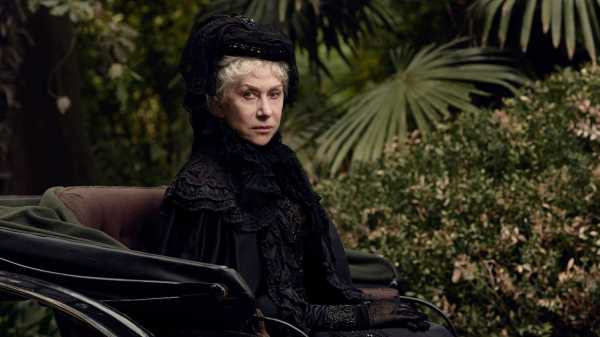 The Spierig brothers’ new film, “Winchester,” which opens today, is a
historical drama of sorts, a loose adaptation of the true story of Sarah
Winchester, heiress to the firearms fortune, who was born around 1840
and died in 1922. It’s also a historical throwback in itself, a horror
film in the way that horror films were likely to horrify in the
inhibited time before the late sixties, with jumps and jolts of
grotesquerie but without torture or gore or really anything that would
cause squeamish viewers to cover their eyes. That’s doubtless due to a
business decision: “Winchester” is rated PG-13, which sharply limits
what can be shown and which leads to a rendering of violence that’s
merely allusive, such as gunshots that don’t spatter blood and tissue
but merely make people fall dead.

The constraints imposed by the desired rating seem to have helped the
film. The directors, Peter and Michael Spierig (who made “Predestination” and “Jigsaw”), wrote the script with Tom Vaughan. They take an old-fashioned haunted-house tale and, without recourse to
visually or sonically disgusting elements, build and unfold a story
that’s largely centered on dialogue and that runs, above all, on an
element of moral and political disgust. The action is set in 1906. Helen
Mirren stars as Sarah Winchester, a colossally wealthy woman who
maintains her mansion in San Jose, California, in a constant (literally) state of
construction. She had bought it as a place of moderate size, and she
keeps adding rooms and stories to it, based not on the designs of
architects but on her own designs, resulting in a crazy quilt of styles
as well as in practical conundrums, such as hidden passageways and blind
corridors and staircases.

That part of the tale is true; the Winchester house exists to this day
as a tourist attraction (and the year in which the movie is set invokes
another true story that’s involved: the San Francisco earthquake). The
drama that unfolds from there is based on an enduring myth. In real
life, Sarah Winchester’s daughter died in infancy, and her husband died
young; the myth holds that she considered herself to be cursed—by the
spirits of those who died by gunshots from Winchester products—and that
her obsessive renovation of the house was a form of expiation, on
command from the spirits who demanded that she shelter them. The
Spierigs—identical twins born in Germany, raised and working in
Australia (where “Winchester” was made)—take this tale literally, with
some metaphysical effects depicting the realization of that curse.

The setup is classical and creaky. A youngish San Francisco doctor, Eric
Price (Jason Clarke), a laudanum addict who is himself in mourning for
his late wife, Ruby (Laura Brent), is summoned by an unscrupulous
businessman named Gates (Tyler Coppin) for an odd job. Gates represents
the owners of a half-interest in the Winchester firm; Price is to be
dispatched to Sarah Winchester’s mansion to become acquainted with her,
and then to issue a report as to her mental fitness to run the firm.
(Price is, of course, meant to judge her unsound, so that Gates’s
employers can lay hold of her shares.)

Arriving at the mansion, Eric finds it to be run on rigid rules—and also
finds it to be in a state of torment. Sarah’s niece, Marian (Sarah
Snook), and Marian’s young son, Henry (Finn Scicluna-O'Prey), are
staying with her, and Henry seems to have fallen prey to the house’s
curse—he’s possessed of impulses that range from mean to
self-destructive (and the Spierigs devise an eerie if conventional trope
to signify their onset). So far, unfortunately, so dull. But, as Eric
insinuates himself into the troubled life of the household (and comes up
against some mysterious thumps and bumps and flash-frame apparitions),
he also becomes acquainted with the grimly witty and intelligent Sarah
herself, and their dialectical confrontations in her home office have a
flair that owes much to Mirren’s sharply focussed, quiet grandeur.

It’s when Eric prowls around, late at night, in parts of the house that
he’s told are off-limits, that the movie gets its one pure visual
inspiration, one that’s based in Mirren’s gestural ingenuity: he spies
on Sarah as she’s doing some architectural drawing in a state of
visionary ecstasy akin to automatic writing. That moment unlocks the
film’s sociopolitical inspiration: Sarah’s connection with the spirits
of the victims of Winchester firearms has a practical basis in
documentary research. She keeps voluminous and ever-growing files of
newspaper clippings about gun killings (though how she knows of the Winchester
connection isn’t made clear), and it’s the spirits of those victims who
are guiding her hand in the drawings. Under their counsel and command,
she’s reconstructing the rooms in which they were killed.

But of all these spirits, one is the angriest, the least reconciled, and
the most violent: the spirit of a man named Benjamin Block (Eamon
Farren), a Southerner whose two brothers, serving in the Confederate
Army, were killed in the Civil War by Union soldiers armed with
Winchester rifles. (The Spierigs also depict, briefly, other victims of Winchesters, including Native
Americans and black people, one of whom is in chains—and these seemingly
passive spirits are present only as silent sentinels of injustice.)

Benjamin’s rage results in a high pitch of surrealistic doings that the
Spierigs depict with a sly simplicity, which only the blaringly
conventional score (by Peter Spierig) belies; when they depict the
startling and the astonishing, they want it to be seen clearly. In
“Winchester,” the Spierigs have made a blunt and pissy American
political film about the national curse of firearms and the unslaked,
violent, destructive anger of the defeated Confederacy. It’s good that
“Winchester” is rated PG-13; for all its metaphysical and mythological
fantasy, it’s an educational film—a documentary refracted through the
realm of the phantasmagoric.